A Time of Lament

We find ourselves living at a time of great fear, sorrow and disappointment. Many of us are faced with dilemmas that we never expected, like layoffs, furloughs or closing down our businesses, i.e. burying a dream that you’ve worked so hard for. Some things that are being missed during this time simply can’t be recovered: a wedding day, a family’s first baby shower, a senior year of high school, a mother’s 60th birthday, the list could go on. For these and a thousand other situations, there isn’t a redo; you can’t get back these moments, and that is something to lament!

But there is more to lament than personal disappointment right now. There is the pain and grief that the world is not right. There are the millions who have been laid off, the thousands that have died, and the many living in fear and total social isolation. Our current situation has created and highlighted these and a thousand other issues. What can one do? Lament.

What do I mean by lament?

Lament is a passionate state or expression of grief or sorrow. Lament follows the theme that, at one time, everything was good, but now all is lost. Lament is an intense, almost violent form of grief-stricken prayer. This concept is something almost entirely absent from the western Church, but was and still is very prominent in Jewish life and Eastern cultures.

I do think we’ve seen a culturally relevant example in recent history in one person in particular – Mr. Rogers. That saintly man carried the grief and pain of others in his soul. He acted as a counselor and friend for the children on his show, the children’s families and production crew members. He made deep, personal investment into the lives of those around him, seeking to know their names, their stories, and following up when he’d see them again. And though his daily process involved speaking into children’s lives, all too often, there were no ultimate answers to the issues they were facing. Both the theatrical biopic film and the recent documentary highlight a frequent occurrence that followed the taping of his shows: when filming finished and the studio was empty, Fred Rogers would often bang on his piano. I think in some way, Mr. Rogers was practicing lament (though without words) when he would pound on the keys. You could hear the anger, the pain and the protest in his playing – that’s lament. Lament is the outcry when there is no answer; it’s the pain of the process. Lament is the expression of the pain of the journey without an end in sight.

In our culture, we are very uncomfortable sitting in grief; we want to move to the good and the hopeful quickly. The idea of lament is not a comforting or comfortable idea to us. If we’re ever brave enough to practice it, we do our best to make it brief.

Maybe that’s because it feels hopeless and dismal to us. Lament doesn’t fit the western ideal of “Happily ever after,” nor does it fit our Systematic theologies of nicely categorizing things. I love what Oswald Bayer has observed: “Systematic theology (in dealing with suffering) in general tends to refer to a happy ending all too hastily and fails to take seriously the fruitless disorientation of the journey in all its uncertainties.” For the follower of Jesus, joy is the final word on the trials and difficulties we experience in life. However, much of that earthly experience will be marked with hardship, suffering, grief and lament.

Doubtless, this is why lament takes up significant space in the Biblical story, recognizing that we are living in a world that was never meant to be – a world filled with dark forces, evil, violence, decay, sickness, disease and death. We live in a world of sin.

“Lament can refer to the mystery of God, ‘his ways are not our ways.’ It can refer to the false absolutism of rationalism, to which postmodernists now react legitimately. It can reflect on distrust of an ordered universe, and on disbelief in the sovereignty of the creator. It can reflect the amount of pain and suffering humans can endure, collapse under, or transcend, resulting in post-traumatic nervous stress or in post-traumatic spiritual growth.” – The Psalms as Christian Lament, Walke, Moore, and Houston.

A basic framework for lament is orientation, disorientation, reorientation. And this can be seen in many Psalms, which can function as a guide for us through lament. The Psalms direct our complaints, our fears, our doubts, our failure, our praise, our needs and our hopes, to God and God alone. Along with this, the Psalms permit us to speak to God in total, raw authenticity and unfiltered honesty. Yet, they never leave us there. The point of scripture is to shape our hearts and minds into the right kind of thoughts and desires, to be and become God’s faithful and righteous people. I desire that by looking together at these very raw and unfiltered Psalms – the Spirit would shape our raw emotions and confessions into the right emotions and confessions.

For our example, let’s look at Psalm 44. In this Psalm, like many others, everything was great. Security, prosperity, victory – Israel was living in covenant faithfulness to Yahweh. Then something went terribly wrong. They lost a great battle, and they’d been bereaved, killed and humiliated. But how can that be? Wasn’t it YHWH, the Most High God, who fought for Israel? Had they lost God? Had God abandoned them? Was God asleep(vs.23)? What was going on? Rather than becoming stoic, nihilist, or cynical, the Psalm will teach us to take our complaint or lament to God, the one who sees, hears and knows (Exodus 3:7).

So let’s break down Psalm 44 into our three-part framework. It might be helpful to grab a notebook and work through this exercise with me so we can apply these principles personally.

Verses 9-22 articulate the Psalmist’s observations, a feeling that all was lost and a desire to understand what was happening. This part of the Psalm helps us identify our grief. What is bringing pain, frustration or fear into our lives? Bring these things as complaints to God. Remember, one primary function of the Psalms is to teach us to take our lives – every part of them – to God. Cast your cares upon him. Take a moment and list out (at least) three laments from your current situation.

Psalm 44:23-26 presents the Psalmist’s appeal for redemption. Take this lament and make it your prayer: What is it that you want the Lord to do for you? Be specific, not generic. Be honest. Say what is in you and not what should be in you. Take this prayer with you into your week. Each time you feel those feelings of doubt, fear or abandonment, etc., take it to our Lord who journeys the way with us. Lament can lead us into a fruitful time, leading to a deepening of our love and trust in God.

Ultimately, lament can express a more profound trust in God, or it can wholly reject God. Lament can become either the spiritual experience of trustful humility or the defiance of God in pride.

Biblically, lament is a transitional state like the Exodus: a tempted environment of murmurings and distrust, or joyful anticipation of the promised land.

So Church, as we are traveling through this wilderness season, a long journey of unknowns, of scarcity, of fear on the right and the left; the temptation for us will be like that of the children of Israel – to question God’s goodness, love, faithfulness and promises. The temptation will be to doubt Him. And this is where the Psalms, and especially the Psalms of Lament, can teach us. The Psalms direct our complaints, our fears, our doubts, our failure, and our praise, our needs and our hopes to God and God alone.

Martin Luther, commenting on the richness of the Psalms, said:

“Where do you find deeper, more sorrowful, or pitiful words of sadness than in the Psalms of lamentation? There again, you look into the hearts of the Saints, as into death, yes, as into hell itself… When they speak of fear and hope, they use such words that no painter could so depict for your fear or hope, and no Cicero or other orator has so portrayed them. And that they speak these words to God and with God, this I repeat, is the best thing of all. This gives the words double earnestness and life.” – Martin Luther, Word and Sacrament

My prayer is that, in this strange season, we would engage this ancient practice of bringing our cares, our grief and our anger to God. I pray that the Psalms of Lamentation will teach us how to lament properly, how to bring our laments to God and how to fellowship in the sufferings of Jesus, and through it be more conformed to His image.

One last thought on Lament.

There is one massive difference between the Old Testament context of lament and the Christian’s New Testament context. The Jews of the Old Testament could protest their perceived unjust suffering (though there aren’t many characters who didn’t suffer greatly)because much of the Mosaic Law promised monetary blessing, health and happiness in response to faithfulness to the covenant. But for Christians who are under the New Covenant, inaugurated by Jesus, we cannot protest suffering. Christians are followers of Jesus, and He makes it clear that suffering is a part of the program for the Christian journey. As He suffered innocently, so must His followers, for they are not greater than their master (John 5:1-5; 8:34-39). Consequently, a voiced protest is not heard in Christ or the apostles’ teaching.

As C.S Lewis reminds us, “We were promised sufferings. They were part of the program. We were even told, ‘Blessed are they that mourn,’ and I accept it. I’ve got nothing that I hadn’t bargained for. Of course, it is different when the thing happens to oneself, not to others, and in reality, not imagination.” – C.S. Lewis, A Grief Observed

Christians can lament, but they cannot protest to the one who, with cracked lips, lacerated back, pierced hands and feet, with labored breaths and beard torn from His face, suffered the death of the cross for our sake.

English Poet George Herbert wrote an incredible poem called The Sacrifice. Stanza after stanza (62 in total), He chronicles the various sufferings and afflictions of the life of Jesus – each one with the refrain “Was ever grief like mine?”

God has suffered; He knows the difficulty of the journey, for He Himself has traveled it before, and He is journeying with us even now. As Psalm 62 says, “Trust in him at all times, you people; pour out your hearts to him, for God is our refuge.”

Soren Kierkegaard, who reflected much on the life of Job, left his mark in the corner of Copenhagen’s Cathedral. It reads: “We believe that God is great enough to harbor our little lives with all their grievances and that he can lead us from darkness through to the other side.” Amen, and Amen 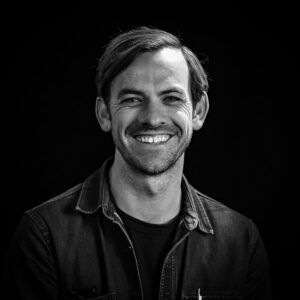 Brian Charles Brodersen (Char) is the associate pastor at CCCM. Char has pastored a small church in Northern CA for 13 years. He and his wife Grace have three children.