Are We Drifting Backward? 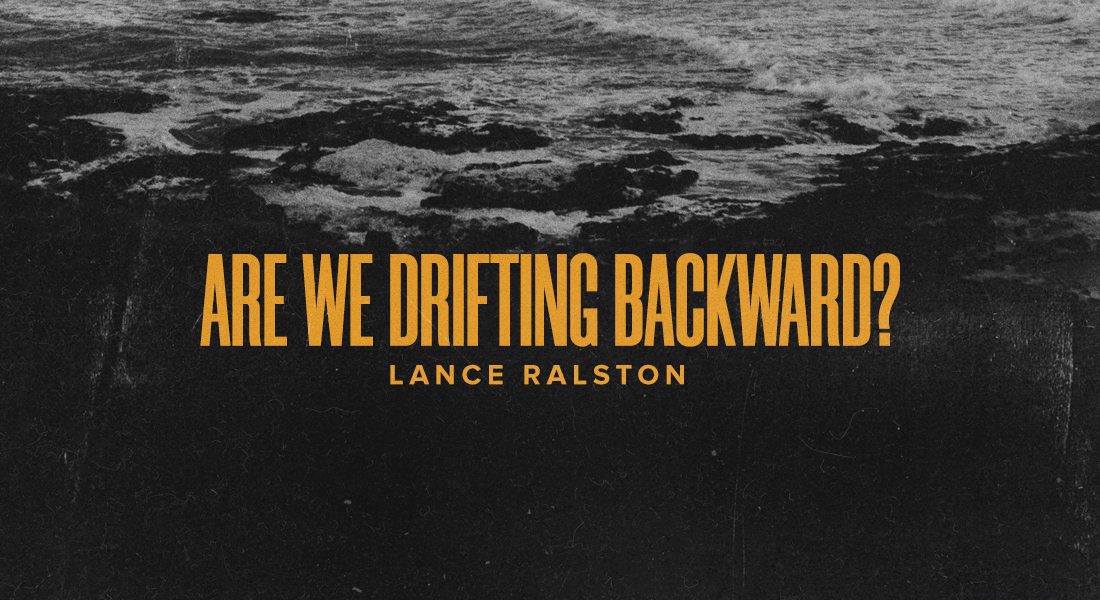 I’m about to share something personal. It’s a lesson I learned years ago. I share it because it illustrates what I believe to be a crucial truth. It seems many mature believers “get stuck” at some point in their walk. They’ve made good progress, then stall. They may stay there for months, sometimes for years. As many Christians know—If you’re not making progress, you’re inevitably slipping back.

When we first come to faith in Christ, the Holy Spirit helps us set aside obvious vices, the so-called “sins of the flesh.”

Our change in behavior sets us at odds with the people we used to hang out with. Since we’re not doing what we did, while they continue to, we find new peers who encourage our walk with Christ. Chapter two in our journey is when the Holy Spirit moves beyond the sins of the flesh to the sins of the soul. It isn’t just behaviors that are challenged; its thoughts, opinions, attitudes. The struggle in dealing with these is that they are wrapped around our identity.

The sins of the flesh were just things we did. The sins of the soul are tied to who we are. The Holy Spirit challenges us to set aside our “old man,” as the New Testament calls our old identity, and embrace our “new man” who we really are now in Christ. (Romans 6:5-14; Ephesians 4:20-24; 2 Corinthians 5:17). Because these are deeper changes that profoundly affect how we see ourselves and place in the world, they’re a far greater challenge than the sins of the flesh. Many balk at the prospect of setting aside the familiar for the unknown. They may not like what the Spirit has revealed, but at least it’s known. The identity God calls them into is for many, an unknown too scary to brave.

For years I struggled with anger.

I’d have moments of rage that exploded in punching walls, throwing things or verbal abuse. Fortunately, the violence was never directed at people. After each outburst, I regretted my behavior but made no progress in shutting it down. I eventually realized why—It worked! My outbursts were usually at work where I was a manager. When I blew up, it made the employees “tow the line” and get back to work.

Then I got married and had a child. When my son failed to comply with some command, I blew up. When I saw the fear on his little face, I realized how out of control I was and the damage I was doing. I’d prayed about my rage before but now I was desperate to change. But—Nothing happened. The rage continued.

One day, after yet another regrettable outburst, as I pleaded with God to change me, I sensed the Spirit say, “Your rage is a symptom.”

Spirit: “It would ruin you.”

Spirit: “You’re not ready. If I showed you the root cause, you’d despair.”

Me: “Then I’ll never change. I have to change. Please show me.”

As anyone who’s had that kind of moment with the Holy Spirit knows, the entire exchange took place in no more than a couple seconds. A profound peace came as I realized God was going to do a work in me to bring me to the place where He could show me what the cause of my anger was. Once I knew, I could repent and experience healing. Little did I know when it was revealed, it would be so painful.

Over the next months, my walk with God became more secure as I began to better understand His grace. He proved Himself faithful time and again. I realized how wise and powerful He is. It wasn’t till later that I could see all that was part of what I needed to know so the change could come. So that a part of the “old Lance” could be intentionally put away and my new identity installed.

Then one day, in a setting similar to the previous encounter, I sensed the Spirit ask, “Are you ready?”

My reply: “If you’re asking, it means I am.” That was followed by a kind of pause in which I sensed the Spirit was giving me the opportunity to compose myself. “Okay,” I thought, “Big reveal coming. Get ready.” Then it came.

“Lance, your anger is rooted in your need to be in control. You give lip service to Me being Lord, but you haven’t surrendered to Me. You’ve taken Me as Savior, but not as GOD. YOU sit on your throne. So when things aren’t going as you want, you blow up because it intimidates people and makes them comply. It puts you ‘in charge.’ But it also harms your relationships with them. I’m God! Get off your throne and yield it to Me.”

As before, all this came in the space of a couple seconds. And as warned, it was a revelation so deep and disturbing, I was barely able to handle it. Undone! There’s no other way to describe how I felt. I seemed the world’s biggest traitor because I had betrayed myself without knowing it. I realized how comfortable I’d been living a lie. In fervent prayer, I admitted my sin, asked forgiveness, and the work of truth and grace to surrender utterly to God as God, to take control of me and help me stay off my throne.

He did. The next months saw a remarkable change. When anger stirred, I quietly reminded myself Who was in control. What a delight to watch the fire of hostility die instead of flare up. There were a couple moments in the next years when the rage spun up, but it was quickly repented of. It’s been many years since the last outburst.

Note: This was the cause of my anger problem. I’m not suggesting it’s someone else’s. Their brokenness may lie elsewhere.

That wasn’t the end of the Spirit’s work. He’s gone on to deal with other things in me. Because I’m not in Heaven yet, there’s more brokenness to be made whole, more sin to repent of, more holes in my soul that grace and truth need to fill.

2 Corinthians 5:17 is a key truth in pressing into spiritual maturity. “If anyone is in Christ, he is a new creation; old things have passed away; behold, all things have become new.” Faith in Jesus unites us to His death and resurrection. The Cross puts an end to what we were while the resurrection births us as a new creation. Walking in the Spirit means learning to “put off the old man and put on the new.”

Is there something you plead with God to change but seem to make no headway in? Does anger often get the best of you? Are you locked in bitterness? Does envy squeeze you? It may be the reason you still struggle with something is that it’s rooted in your old identity. If you have repeatedly asked God to “fix” something still broken, it’s time to ask why. Ask the Spirit to bring you to the place where you can see the cause.

Because the reality is, if we’re not growing, if we’re not moving forward in our walk with God, we’re inevitably drifting backward. We simply must press on.