Declaring His Glory Among the Nations: How Are We Doing? Part 1 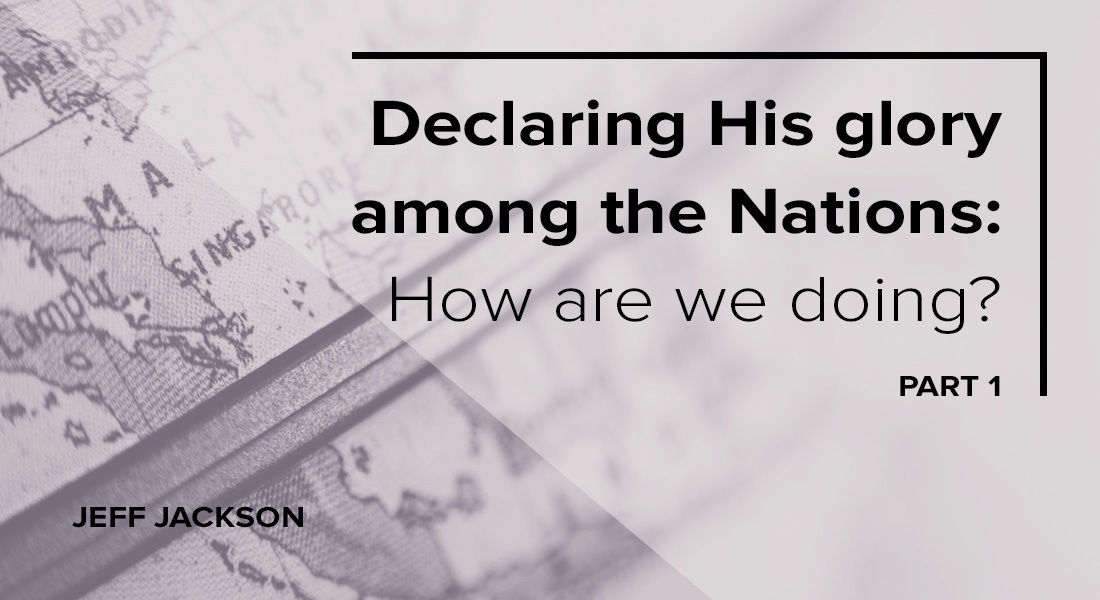 According to Acts 1:3, from resurrection Sunday until He ascended to heaven, Jesus spent a total of 40 days with the apostles and disciples. Although He probably discussed a myriad of subjects with them during that time, the written record of His post-resurrection conversations in the Gospels and the first few verses of the book of Acts are minimal yet powerfully focused.

That focus was God’s love for all people and the role His followers were to have in expressing it.

As Luke 24:44-49 reveals, Jesus knew that for His disciples to receive, comprehend and obey the command He was about to give them, they needed to view and understand God’s written word in a way they never had before. That even though they had been born and raised under the influence of His written word and had just spent three years interacting with Jesus, their minds needed to be opened so they could truly comprehend the Scriptures.

After giving them this fresh perspective on God’s word, Jesus showed them that because His recent suffering, death and resurrection had already been written about, those events had to be fulfilled—which is what they had just witnessed themselves.

But He didn’t stop there.

He went on to say that in the same way the things written about Him MUST take place, so also, the need for repentance and forgiveness of sins MUST be proclaimed to all of the ethnic groups that God Himself created, starting with their fellow Jews there in Jerusalem.

Although Luke didn’t record the Old Testament scriptures Jesus used, (the New Testament hadn’t yet been written), or how they were the basis of the command He gave to His followers to go and preach the Gospel and make disciples among every ethnic group, I believe these are a few of the things He may have pointed out to them:

1. Their God is the creator of all languages and ethnic diversity and will receive worship from people within each of those distinct groups (Psalm 86:9).

2. Thus He is also the creator of their specific ethnic group, and He had made clear to the three main patriarchs that the unique relationship they had with Him was not just for their own good, but for the ultimate good of all ethnic groups (Genesis 12:1-3; 26:4; 28:14).

3. That His glory must be declared to all ethnic groups, so that His name and fame will be spread to all people regardless of where they live on the planet (Psalm 96:3; 1 Kings 8:41-43).

4. That He is the suffering servant referred to in Isaiah, and that the sacrifice He made wasn’t just to provide light for Israel alone but for all ethnic groups throughout the whole earth (Isaiah 42:6; 49:6).

Whether He used those Scriptures or others, what’s clear is that He showed them God’s love for all people using only the Old Testament, and then commanded them to take the message of that Good News to every ethnic group regardless of where they live and to make disciples from among them.

Today, we have the privilege of coupling the biblical basis He gave them from the Old Testament with truths like these from the New Testament:

2. His declaration of God’s love for Gentiles during Old Testament times—and the response of His own people to Him pointing this out (Luke 4:23-30).

4. A written record in the book of Acts of His people’s obedience to the command from the day He ascended till approximately 40 years later.

5. A reinforcement of the truth that He created all ethnic groups from one original couple, along with the fact that He predetermines when those groups would come in to existence and where they will call home (Acts 17:26).

6. Details about the future that includes a description of Him receiving worship from people representing every people, tribe, tongue and nation (Revelation 5:9; 7:9), and that the unique glory and honor He has bestowed upon each ethnic group will be offered to Him as worship in the New Jerusalem (Revelation 21:24-26).

Clearly, Jesus has given us a command to participate in bringing about an outcome that is guaranteed to take place. This means that it’s possible to create metrics that can help us measure the level of our obedience to the command up to this moment in time.

In my next two posts, I’ll explore some of those metrics, paint as clear a picture as possible of how far our level of obedience has moved things toward that guaranteed outcome and then try to nudge all of us to fresh obedience through a Mordecai moment and message.