Experiencing an Insurrection of Kindness in Your Ministry 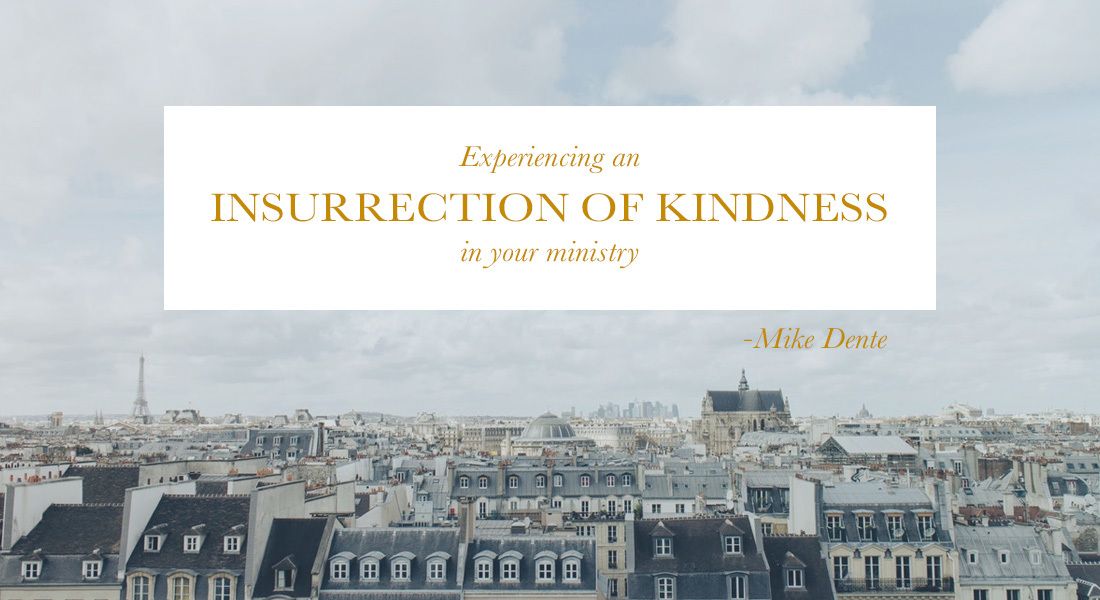 Even though I know it comes every year, I find that winter sneaks up on me. Often it’s the holiday season that distracts me. Life is busy, and so I grab a sweater before I’m off. Inevitably the day will come when I’ll step outside, and my heaviest winter clothing just isn’t enough. I’ve got to pull out my winter coat because the wind cuts through my clothing, and the chill clings to my bones. Days like that inspire thankfulness for a warm café or even a full city bus that serves as an escape from bitter wind and icy temperatures.

Thankfully the winters in Paris are not usually extreme, but in January 1954, temperatures descended below zero degrees Fahrenheit.

The Seine River slushed through the city center with floating plaques of ice and snow. Twenty-nine percent of Parisians didn’t have running water or electricity as the work of reconstruction after WWII was far from complete.

In the suburbs of the capitol, hastily erected shanty towns were made of wagons, tents and abandoned construction material to keep up with the demands of an ever-growing population and much needed new work force.1 The government worked to find a solution to the housing crisis and shelter for its people, but the talks were slowed down by conflicting political rhetoric leaving countless French people in deplorable conditions.

On the night of January 3, a three-month-old baby named Marc died in his mother’s arms. The tragic passing of the child happened the night the General Assembly rejected a plan to open up funding for emergency housing. The news profoundly shocked the nation, but the legislative stalemate on emergency housing remained frozen.

He used the conservative newspaper to call on the government to take notice of the humanitarian crisis and join the funeral procession. An answer came. Maurice Lemaire, Minister of Reconstruction and Housing, attended the funeral cortege for the deceased infant on January 12 and later relayed his horror of the misery he witnessed.2

In the days to follow, the temperature plunged even lower and no political agreement could be reached. On February 1, 1954, a woman who’d been evicted from her Parisian apartment the day before was found dead clutching her eviction notice on Boulevard Sebastopol. Like many at that time, she was left to find shelter where she could and was caught by the sub-zero temperatures. Some hid in metro stations, others received blankets from various goodwill associations that she apparently hadn’t been informed of.
A profound sense of indignation swept over the city. How many more lives would be lost? How much longer would it take for the authorities to act? By the suggestion of a journalist, Abbé Pierre decided to make another appeal for help. This time he wouldn’t address the lawmakers or write to the conservative elite. His plan was a call for help through the radio by what he would call an “Insurrection of Kindness.”

He called the office of Radio Luxembourg, a large independent radio station, but was met with a bureaucratic obstacle. He was told he couldn’t just come in and interrupt the programming at the drop of a hat; there was protocol to be adhered to.

Abbé Pierre reasoned with them. “Tomorrow morning when you open your newspaper in your warm apartment with your cup of coffee, and you read about more men, women and children gathered up in the streets dead from the cold, you will have to admit, it’s your fault because you let yourself be detoured by a few administrative procedures.”3

Success. The green light was given, and Abbé Pierre was accorded less than an hour to traverse Paris and make his appeal.

“My friends, help…a woman has just died, frozen last night at three in the morning on the sidewalk of Boulevard Sebastopol, clutching the paper by which the day before she’d been evicted. Tonight, there are more than 2,000 poor souls under the ice, without roofs, without bread and quite a few almost naked…”4

That day the Insurrection of Kindness was born. A record number of gifts flooded in totaling in today’s economy in the millions of dollars. Money, food, clothing, furniture, tents, overflowed at the drop off point. Private citizens, government officials, ex-pats like Charlie Chaplin gave generously, and the movement appeared to inspire the government to push through to meet the immediate need.5

Abbé Pierre was no ordinary parish priest. He was a resistance fighter in WWII; he saved the lives of several Jews from the Nazis, and he became a political figure, even meeting President Roosevelt the same year he gave his radio appeal.

He became the founder of a movement called Emmaüs, a symbol for the fight for social justice, and in the end a political figure. Whenever a religious person gets involved at that level, fans and enemies blur the lines that render it difficult to make a perfect hero out of him. But that wintery day in 1954, he seized the open door set before him.

When I look at his story, it encourages me that a Christian rose up to meet the need of the day that no one else in a more powerful position was able to do.

In so doing, the name of Christ was used to meet the needs of a desperate population and bring about a social consciousness to those that could help. It inspires me as I think about this New Year before us. Who knows what lies ahead, but maybe an opportunity will present itself that we can step into by God’s grace. Maybe we can see new Insurrections of Kindness in our own places of ministry, see Jesus do great things with simple people. It’s my hope for 2018.