Give the Problem to God & Watch Him Work 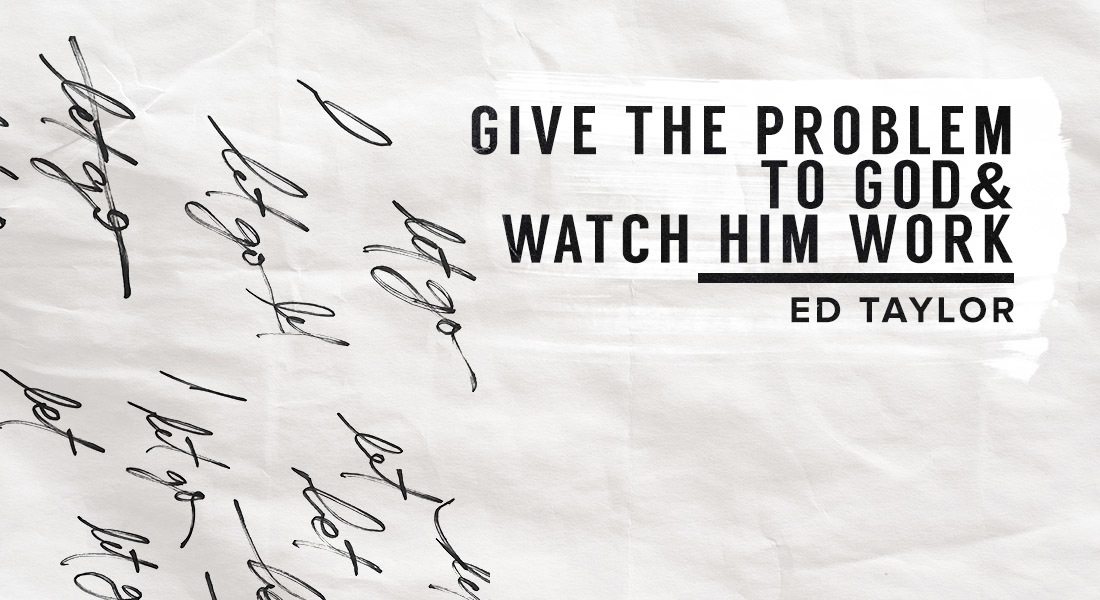 Life can be hard, harder than hard at times. There are those moments in all of our lives when we think the difficulty is so large that there is no way out. It’s over. I’ve come to the end. We so often face situations where we think all is lost, and we’re done. Forget about it. It will never change. It’s easy to lose heart in difficult times. Life allows things that begin to look as if all is against you. There is no way out. God will even send you a brother or a sister to encourage you, but you quickly dismiss their words and their help, because you’re convinced, it won’t change.

Elisha’s servant was in this exact place in 2 Kings 6. He woke up one morning to see a Syrian army approaching to capture him. It overwhelmed him. He cried out to Elisha, “Alas, my master, what shall we do?” With all that he saw, he panicked. He didn’t know what to do. But Elisha did. He prayed. He prayed that God would open the eyes of his servant, so that he could see it’s not as bad as it appeared.

Just like Elisha’s servant, what is needed in times like these is for God to open our eyes to see what we cannot see spiritually.

There is a hidden spiritual realm all around us. It’s real but unseen. There is the physical and the spiritual. Unfortunately, the physical tends to get all of our attention and focus. It forces itself into the forefront, into our face, our mind! You get an email. A phone call. Eyes see. Hearts feel. Minds race. It’s easy to lose sight of the spiritual because of the physical. We have to train ourselves to be sensitive to see the spiritual.

Sadly, living as we do in this material world, we get so involved in the physical, material things of life, where that is all we ever see.

We lose sight of the spiritual. We lose sight of God! We get so concerned about the opposition that is facing us. The power of the enemy, especially when we begin to fight the forces of the world. How hard it is. How hopeless it seems! We are like this servant. What we see discourages us! ALAS! We falsely conclude almost every day, “Oh there’s no way we can withstand them!”

“You are of God, little children, and have overcome them, because He who is in you is greater than he who is in the world” (1 John 4:4, NKJV).

“What can we say about such wonderful things as these? If God is for us, who can ever be against us? Since God did not spare even his own Son but gave him up for us all, won’t he also give us everything else” (Romans 8:31-32, NLT).

These truths are ours in Christ. Don’t forget them. Memorize them. Hide them in your heart. God is greater. God is stronger. God is faithful. When our eyes are on the situation, panic takes over. We freak out when we see our enemies, when we face our difficulties.

Pastor Chuck Smith taught us, “The longer we look at our problem, the bigger it gets!” It’s true! The problems surrounding our lives can seem so big that we don’t even see or feel God anymore! We are like Elisha’s servant here saying, “It’s over! Nothing we can do. Let’s just throw up our hands and give up.” Don’t give up!

Oh, that God would open our eyes, that we might see the spiritual.

Elisha prayed that his servant’s eyes would be open, and they were! He saw the stronger army of God surrounding the place. I pray that in every situation we are in, we would not only see the problems around us but also the solutions! When the eyes of the servant were open, he could see the spiritual parts behind the scenes; he saw that the angels of the Lord were surrounding the Syrians, the horses and chariots of fire surrounding the Syrian army. What a difference it made in his whole outlook.

“And when the servant of the man of God arose early and went out, there was an army, surrounding the city with horses and chariots. And his servant said to him, ‘Alas, my master! What shall we do?’ So he answered, ‘Do not fear, for those who are with us are more than those who are with them.’ And Elisha prayed, and said, ‘LORD, I pray, open his eyes that he may see.’ Then the LORD opened the eyes of the young man, and he saw. And behold, the mountain was full of horses and chariots of fire all around Elisha” (2 Kings 6:15-17, NKJV).

When we only look at the material things, so often we say, “We’ve had it!”, but when God opens our eyes, and we see the spiritual dimension, it changes completely. We say, “They’ve had it!” Oh, that we would see the power of God! The power that God has made available to us. Those resources that are ours in the realm of the Spirit.

Looking back, isn’t it true that God has been faithful? Isn’t it true God was faithful? What was the big problem 10 years ago? Ten days ago? God came through. He did then. He will again!

Ed Taylor is the senior pastor of Calvary Aurora that began Sunday services in December 1999 and today impacts the community for Jesus in wonderful ways.