Immigration Lessons from the Gibeonites 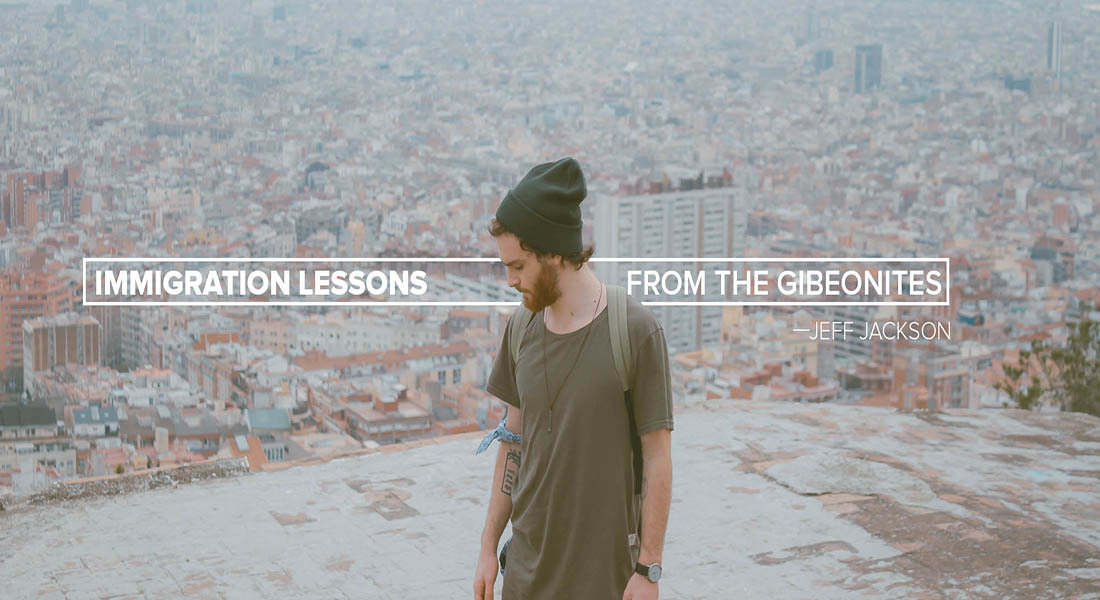 Jeff Jackson will be leading a workshop at the 2017 CCCM Pastors and Leaders Conference, June 26-29.

The Bible is full of admonitions for God’s people to be an expression of His love for the poor and oppressed. This includes caring for the fatherless, the widow and the “strangers” that live among us, (Deuteronomy 10:17-22 being just one of dozens of examples). But does the Bible have anything to say about the strangers who now live in the midst of God’s people because of their craftiness and ability to circumvent the laws that a sovereign people have in place? How should His people interact with them? Is there an example of a situation like this recorded in God’s word? If so, are there any principles to be derived that might apply to the situation followers of Jesus in the United States find themselves in at our moment in history? I believe there are.

I believe that one of the reasons God may have recorded the whole story of the Gibeonites and their interaction with His people way back then, was so that His followers in America more than 2,500 years later would have guidelines on how to represent Him properly in our context today. Without expositing the texts in detail, let me give here are a few key points from the story of Israel and the Gibeonites that I believe contain principles for us today.

♦ When they discovered they had been deceived, they didn’t give them what they deserved, which is one of the ways mercy is expressed. A commitment had been made to them, and Joshua wouldn’t permit God’s people to break that commitment…even though the commitment was actually the result of the Gibeonites deceptiveness. This decision was not popular with the majority of God’s people and caused them to complain against their spiritual leaders (Joshua 9:18).

♦ The Gibeonites agreed to be woodcutters and water carriers, (jobs nobody else really wanted to do, like so many of the undocumented that live among us), to live among and be blessed by the blessings God was going to pour out on His people (Joshua 9:21-27).

♦ The “long day of Joshua,” when the sun stood still, was triggered by God’s calling His people to protect the Gibeonites that were living in their midst (Joshua 10:6-15). The Lord fought for Israel in a unique way as Israel was His tool of protection for the “illegals” that lived among them.

♦ Even generations later, mistreatment of the Gibeonites by Saul and some members of his house in their zeal for their own ethnicity brought serious consequences on members of their own family at a later point in time. And David even permitted the Gibeonites to determine what form the justice should take (2 Samuel 21:1-9).

The following are my thoughts based on these principles:

Personally, I’m not commissioned by my government to enforce immigration law, but I am commissioned by my God to love the stranger, the poor and the oppressed, regardless of their immigration status. I don’t view the changing ethnic make-up of our neighborhoods and our country as a threat to the American “way of life.” I view them as an amazing opportunity for me personally and the members of my church and God’s true followers nationwide, to be able to obey the “great commission” (Matthew 28:18-20) and have a direct, participatory role in helping Revelation 5:9 and 7:9 a reality….what a privilege!

If those I serve and share Jesus with are here illegally, and they are apprehended and deported, I will weep with them, encourage them to stand strong as they face the justice of deportation that they deserve, view them as missionaries being sent to a needy mission field, and then maintain communication with them and pray for them as they represent Jesus in their cities and among their own people. And no, I don’t believe any country’s borders should be eliminated. I believe it’s every government’s responsibility to have immigration laws and enforce them. I don’t have a problem with a border fence, national ID cards, or any other reasonable steps a government takes to try to ensure the safety and success of it’s own people.

But none of those things are the responsibility of the kingdom of God. Its priorities, the King’s priorities, are usually quite opposite.

I thank God for those pesky Gibeonites and what we can learn about Him and our responsibilities to those He brings in to the sphere of our lives, regardless of the path He permitted them to take to get here.