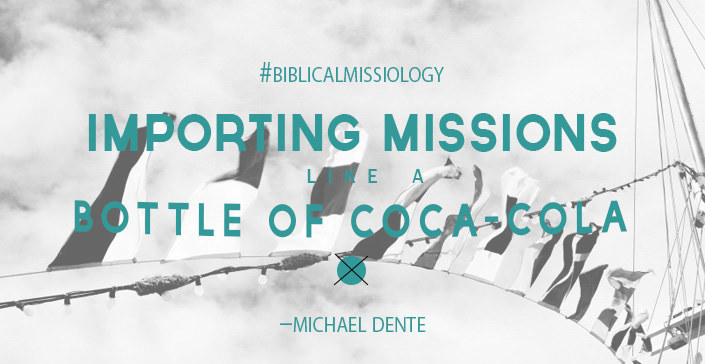 Over the past few decades there has been much to do over the term “missiology” (the theological study of the church and her mission in the world as well as her interaction with culture). There has been extensive analysis of Western culture that is no longer explicitly Christian, ringing the alarm to awaken and fulfill our calling as Christians in an evolving pluralistic society. This theme has taken many directions and has affected the way many do ministry. Most of these authors intend to inspire and encourage churches to be more courageous in reaching the next generation for Jesus.

Having said this, churches around the world are grappling with missiology within their given context. I’ve had the privilege of talking with missionaries asking questions about their feelings on the subject. We seem to agree that it’s been helpful to listen and think through the implications for the countries we serve. Here in France there has been much written on missiology as we are seeing a new openness to the Gospel. The way we react to various questions and doubts is vital to this culture that is so “PostChristian” that it resembles more of an unreached people group. Today, we are asking many questions. What can we do? What is allowed according to la laïcité (the distinctly French version of separation between Church and State)? How can we be more visible? How do we communicate these truths to a people that think they’ve “been there done that”? Yet, they are crying out for the kind of solutions only the Lord Jesus can give. This is where I find our pool of resources so enriching.

Years before I was introduced to the current conversation on missiology, I was in a foreign land where the people really don’t speak English. The culture shock I experienced was a truly breaking experience. The Lord began to show me how many of my ideas of the Kingdom of God were directly related to my American Culture. As I was adopting a new host culture, I needed to find a way to reach people long before I could communicate sound doctrine. I had to learn how to use other resources. Inspired by Hudson Taylor, I began to change the way I dressed, I learned to cook from basic ingredients like the French (mais oui!), and I learned that a grumpy, unthankful attitude translates very clearly even if people don’t understand a word I’m saying. Finally, I learned that acts of love and kindness open the door to a conversation that could begin even in broken French.

The problem seems to be ever before us, ever since the Lord told His disciples to look at the fields ready for the harvest. Spiritual farming is long, hard work. Many times we run out of ideas, out of energy or resources and sometimes we just need a fresh breath of air coming in from a new direction. There’s been a lot said about missiology, and while discourse can be helpful, too much theory can paralyze us. God has called us to His mission, no matter where that might be and He has fitted us to work in the place where He’s called us. While it is good to continue to encourage each other we must avoid the trap of looking for the magic formula that once worked somewhere else but wasn’t created with our mission field in mind.

Over the years, I’ve seen many ministry models and have been excited to see the exponential growth God has done in other places in the world. I’ve seen models fitted perfectly to the culture in the U.S. and have been tempted to imitate them. More often than not these ideas don’t work here, at best they create a temporary stir. I’ve spent long hard nights in prayer asking why. I think it’s an allusive dream to seek out what “works” and import it like a bottle of Coca-Cola. Why? Because God is writing a different story here, (though we may find recognizable structures and transportable ideas), so what “works” is being written into the story by the Author. I am honing in on what I believe is essential: knowing who we are and what God is calling us to do.

“For we are His workmanship, created in Christ Jesus for good works, which God prepared beforehand that we should walk in them” (Ephesians 2:10).

Sure we have an objective, and we are constantly developing our methodology to meet the need. Nevertheless, I see an integral part of my missiology changing from “doing” to “being” so that I can follow Jesus as He shows me what to do. This has led me to do things differently than before and this has caused our church to take on its own personality in relation to the neighborhood the Lord has planted us in. Calvary Chapel Paris is not the biggest church in our city, far from it! Still, I believe we are exactly where He wants us to be and are understood for who we are in Jesus. I think this is something we can all do no matter where the Lord places us. We continue to be inspired by the incredible variety of works the Holy Spirit is doing in the lives of brothers and sisters all over the globe.