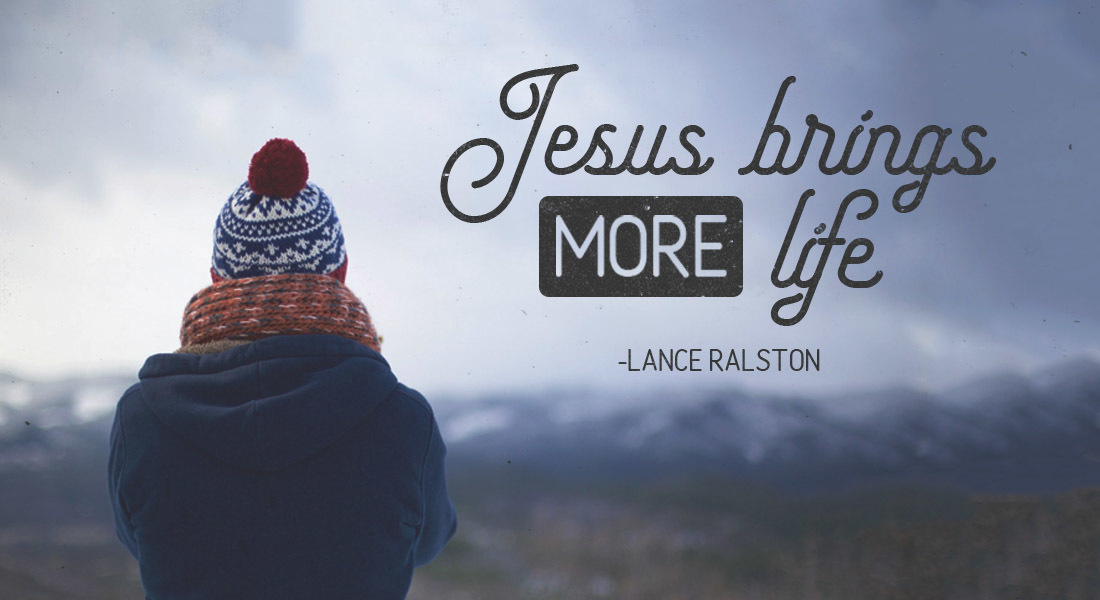 While all God’s Word is inspired and profitable ( 2 Timothy 3:16), most Christians have favorite passages. Sometimes we talk about our “life verse” by which we mean something especially relevant to our entire lives. Then there are seasons in which different verses are especially poignant. They’re a kind of “spiritual flashlight” to help us find our way or provide a handle that brings perspective.

A passage I’ve found especially helpful the last few years is John 10:10, where Jesus says He came for life.

It’s interesting how He phrases it. “I have come that they may have life, and that they may have it more abundantly.” Jesus didn’t just come for life; He came for that life to be “more abundant.” That word means, “…pertaining to a quantity so abundant as to be considerably more than what one would expect or anticipate—that which is more than, more than enough, beyond the norm, abundantly, superfluous.”1

Jesus could have said, “I’ve come that you’d have abundant life.” He didn’t. He said it the way He did to make clear He didn’t just come for life. He came for MORE of it. Christian, however much life God’s grace and Spirit have brought about in you, there’s more! And when you’ve enjoyed that measure of more, there’s more still.

Surely that’s what the Apostle Paul had in mind when he invited the Philippians to adopt his mindset toward spiritual growth.

“Therefore let us, as many as are mature, have this mind; and if in anything you think otherwise, God will reveal even this to you. Nevertheless, to the degree that we have already attained, let us walk by the same rule, let us be of the same mind. Brethren, join in following my example, and note those who so walk, as you have us for a pattern” (Philippians 3:15–17, NKJV).

In verse 16, when Paul says, “to the degree that we have already attained, let us walk by the same rule” he calls us to double our current spiritual standing and maturity. It’s as though he’s said, “All you Christians who’ve got some miles behind you in your spiritual walk, look back at how far you’ve come. Now, look ahead and determine to double it.” Paul could to issue that invitation because he knew Jesus came that we’d have ever more life.

I like the term “flourishing” as a way to capture the essence of all this.

God wants us to flourish.

The Gospel is the message of how Jesus rescued us from sin and death and made it possible for us to flourish. All God’s ways aim at promoting life and ensuring we’d flourish. And that’s why the first part of John 10:10 is an important reminder. Jesus spoke of His mission to promote our flourishing as a contrast to Satan’s objective, “The thief does not come except to steal, and to kill, and to destroy.”

Sin has a goal, and it’s not the promise it makes when we’re tempted. Sin promises good but ultimately ends in ruin. Whatever momentary gain sin may acquire is always more than paid for by an enduring and greater loss. It’s no zero-sum gain, but it is a negative-sum loss.

Because God wants us to flourish, He gives us His Word and commands. Each provide insight into where a life of flourishing lies. God’s commands are never power trips on His part, as though He’s some kind of insecure deity needing to prove His authority by ordering us around. Rather, every command is guidance in how to flourish.

As we follow Jesus, it’s wise for us to keep all this in mind as we watch the world chart new paths for how to live. The devil aims to ruin us; Jesus wants us to flourish.