Mayor of a One-Horse Town 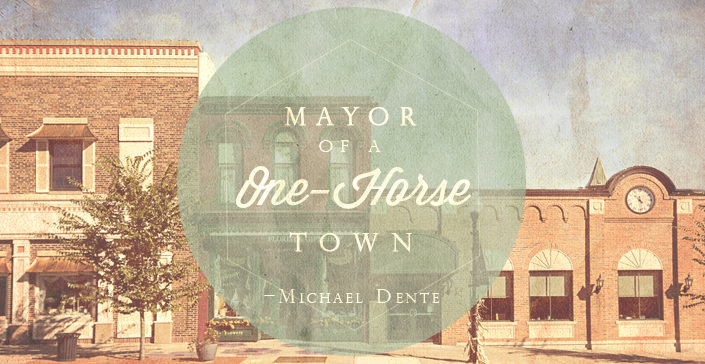 What is more exhilarating for a pastor than to see the Spirit move in people’s lives? This is what we dream of, pray for and preach to see. We have our ideas of what it should look like but sometimes God surprises us. If we’re not too rigid in our expectations, we can almost feel a heavenly smile showing us our vision could look better than we imagined. At our last church organizational meeting, I saw something new, something I’ve been longing for and would least expect in such a seemingly sterile environment. Yet, there it was, the reflection of a deep work of the Spirit on the faces of those present. There were no ambition pushers or plan blockers but there was unity. Everyone in different ways was expressing the same thing: a desire to know God and make Him known to our community.

Our church is located in a city of millions, sometimes our activities seem small, even insignificant but that day we felt like a majority. It’s not always that way, many times when I look around at the crushing need in our city; I wish we were a large church and fall into the lure of equating the size of a church with true effectiveness. That’s why looking at the fruitfulness of our congregation gives me renewed hope for the great things God is doing at this moment in our history. Revival begins in our hearts, in prayer, and I was looking at its traces right there in a church organizational meeting. An unexpected place indeed! Yet this is how God works and it reminds me of two revivals of two different times, both within a few miles from each other in the heart of France.

It’s an unforgettable drive to the tiny French town that blooms from the top of a hill like a mountain wildflower called Taizé. There is nothing on the winding road that leads one to believe all the talk of thousands of youth gathered in prayer and worship. In fact, the Mayor’s office is a private home with an unkempt white horse tied to its ranch style fence! Those who continue on may be surprised to find a modern Christian center with tents, camping vehicles and more young people than actual inhabitants for possibly 20 square miles.

Taizé is the home of an ongoing revival that began in 1940 by brother Roger Schultz. During the Nazi Occupation of France he and his fellow monks hid Jewish families, but after the war they turned to seeking God in prayerful worship. Over the years Schultz allowed the movement to be changed and opened up the meetings to the greater Christian community. Now of course my pastoral sirens are ringing in red alert, these kinds of meetings can have plenty of theological problems… but I also know that many European youth have been born again there. It’s an unlikely setting, but the reality is many of these new Christians find their way into healthy churches afterwards. I even know some very conservative French evangelical pastors who first met Jesus on that little lost hill. Over the years, this revival has discretely drawn thousands of youth to Jesus in spite of my doctrinal differences, and it doesn’t look like it’s slowing down anytime soon.

The next stop, Cluny, is less than 15 minutes away. As a student of History and specifically revivals, I’ve been dying to see this place since studying about it in University. In the Middle Ages, it was a center of political power, learning, drawing closer to God and theological study. Today Cluny is a quaint, tourist attraction without any sign of what it used to be. The abbeys and cathedrals have been renovated. Where thousands used to gather in praise, now stands gigantic marble ruins. Where the monks used to live, is now a government office. The old town square is today a home to a jazz festival and tour guides. Cluny is a picture book French town, but there is nothing left of the spiritual power it once knew.

Jesus’ Words About the Little Ones

Contrasting these two centers of Christianity, in their different periods of history and influence have brought me to something Jesus said in Matthew 18:1-4.

What touches me is a child’s pure trust merits more of Jesus’ undivided attention than a disciple pushing his own ambition. It was a revolutionary thing to say to a patriarchal society. Jesus was clearly giving honor to the smallest because of faith. In the same way Cluny was a great place, but today it has lost its spiritual vibrancy. Visiting Cluny is like watching a documentary, but its streets don’t inspire faith. Yet even as I write these lines there is an ongoing prayer meeting, down the road in a tiny village on top of a hill called Taizé. This encourages me because sometimes I feel like the mayor of a one-horse town in my congregational setting. Be that as it may, God is working in the lives of the little ones right in our midst even if there aren’t hundreds or thousands that come every Sunday.

In the end, I realized I actually had a great time at that organizational meeting. What’s more, the Lord showed me a good lesson or two. One thing is, His ways are really not my ways, so I need to be a more open. Secondly, it is better to be small and alive, than to be a large museum!