Missionaries and the Wise Men from the East: Similarities That Can Bring Encouragement 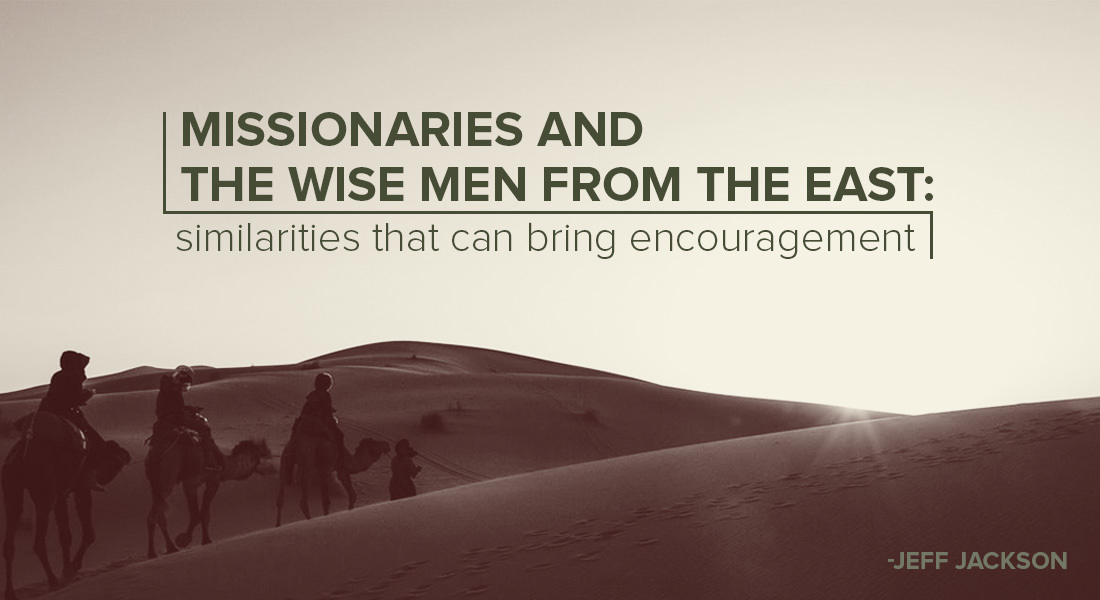 “Now after Jesus was born in Bethlehem of Judea in the days of Herod the king, behold, wise men from the East came to Jerusalem, saying, ‘where is He who has been born King of the Jews? For we have seen His star in the East and have come to worship Him.’ When Herod the king heard this, he was troubled, and all Jerusalem with him” (Matthew 2:1-3).

There are four facts recorded in this Christmas-connected incident that reveal a few profound similarities between the wise men from the East and those who are serving as missionaries in other countries.

Jerusalem contained the largest population of Jews in the world at that time in human history. They were an ethnically and culturally distinct group of people that God revealed Himself to and interacted with in an unique way for more than 2,000 years. He bestowed on them a special position and purpose in His plans to graciously express His love for all of humanity.

But the religious leaders and the vast majority of the people themselves were not interacting with their amazing God in the way that He clearly prescribed that they should. And because of that, they were unaware that their God had just begun acting on their behalf by sending into their chaotic world the One that He had promised so long ago.

The vast majority of the people that missionaries now live among are not interacting with God in the way that He requires. And they too are unaware that He has already acted on their behalf. They have very little or no knowledge at all about the expression of their Creator’s love and grace that has already taken place, and the relationship they can have with Him through the One that He has already sent.

FOREIGNERS RECOGNIZED GOD WAS AT WORK

But God did reveal what He had done to a small group of people from a different country, culture and religion. At the same time that His Son transitioned into our broken and dark world from the cozy womb of His humble, earthly mother, He also placed an out of the ordinary star in the sky.

He knew that a few wise stargazers/astronomers from the East would recognize that this uncommon star was actually like an ornament that belonged to and drew attention to the King of the Jews that had just been born. And even more importantly, He knew these Gentiles would understand that this newborn King was a gift to all people, worthy of worship from a larger group of people than just the Jews.

Every missionary understands that although Jesus is the King of the Jews, He is also the Lamb of God that takes away the sin of the WORLD, and that He is worthy to receive worship from individuals within every tribe, people, nation and tongue that He Himself created.

TRAVEL AND DECLARATION REVEAL HIS WORTHINESS TO BE WORSHIPED

Recognizing the majesty of this special child whose birth was announced like no other person’s in history, an intense passion to worship Him provoked them to depart from their own country, leaving behind their family and friends.

That passion also moved them to expend their own resources to purchase and then offer financially costly expressions of their regard for Him. And their zeal to worship Him also emboldened them to declare their desire to worship Him to people who were ethnically, culturally and religiously very different from them.

It was the wise men’s passion to begin worshiping Him face to face that produced their willingness to do the things I mentioned above. It’s the missionary’s existing personal and intimate worship of Him and their passion to share that experience with people in other countries that led them to take the following steps that resemble what the Magi did:

. It led them to travel a great distance, leaving behind everyone and everything that is familiar and comfortable.

. They’ve paid a significant cost financially to boldly proclaim Him in the hope of increasing the number of people who are giving Him the worship He deserves.

. They’ve also proven they’re willing to offer Him something that is more valuable than anything money can buy–their own lives and those of their wives and children, if necessary.

The declaration of the birth of the King of the Jews was troubling to the civil leader, (Herod), the religious leaders and all of the Jews who lived in Jerusalem. Although it was troubling to them for different reasons, the reality is that the news of what God had already begun to do on behalf of all of them didn’t produce the joy that it should have. It wasn’t received as good news by the majority; it was actually troubling news to them!

The missionary’s presence and passion to worship the King of the Jews, who is also the Savior of all mankind, and their proclamation that God has already acted for the good of those they speak to, will also be troubling news to the majority of the people they share it with. But they share it anyway in the hope that some of the hearers will comprehend the birth, life, death and resurrection of Jesus for what it really is–the most amazing expression of love, mercy and grace ever seen on this planet.

HELP THEM SEE THESE SIMILARITIES

This Christmas season, why not encourage the missionaries you know and love by helping them to see the similarities between what they’ve done and what was recorded about these men from the East?

Let them know that as this text describes, God calls people from other countries and cultures to bring the message of His entry into our world. And that their obedience to this special calling provokes you to rejoice, especially at this time of year.