The Aftermath of Terrorism in Paris: God’s Hope & Your Help 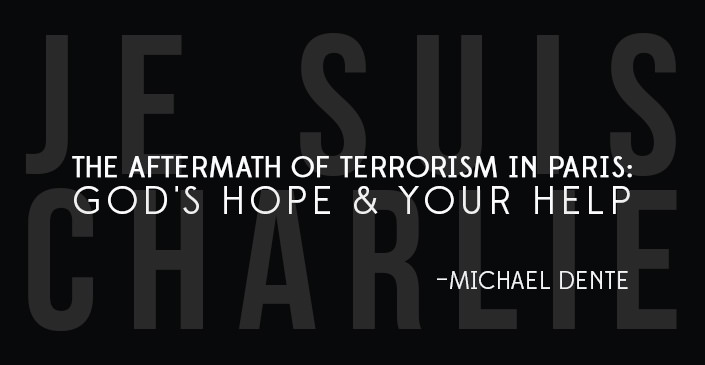 On January 7, 2015, in Paris, France, two brothers, Cherif and Said Kouachi, forced their way into the head offices of the satirical newspaper “Charlie Hebdo” murdering twelve people in a few minutes. They calmly retreated to their car crying they would avenge the ‘prophet,’ firing on anyone who had the misfortune of being in their way. And then they tore through the streets of Paris in a dramatic getaway.

The police and military began working under the direct supervision of the government at a breathtaking speed to recover the trail of the two terrorists whose acts were vindicated by the Yemen branch of Al-Quaïda. President Hollande declared three days of mourning and a minute of silence to be respected by all. That night, spontaneous vigils sprang up all over the country. Burning candles, singing the national anthem, branding pens (as a symbol of the fallen journalists) all became the marks of solidarity and mourning. The most sobering of all was the phrase written on social media, signs, and every visible place, “Je suis Charlie” (I am Charlie).

Charlie Hebdo is a satirical newspaper founded to be “bête and méchant” (stupid and mean) which mocks every political figure, every religion … everyone. Not to say, only French people were subscribers, many people never bought it, but by attacking journalists the Kouachi brothers shot an arrow to the heart of a symbol of national pride and culture.

The next morning while the nation was still in shock and mourning, another man recently released from prison, Amedy Couliby, shot a sanitation worker and killed a police officer on duty before escaping into the southern suburb of Paris. Although, no one suspected the connection between the events, police later discovered that the three men did know each other, having met in prison, worshiped at the same mosque and were on a mission to coordinate their attacks.

The Kouachi brothers were hunted throughout the night of January 8th until they found refuge and took hostages at a printery in a small town northeast of Paris. As the special forces closed in on the terrorists, Couliby made his move, taking hostages in a Kosher grocery store in Paris. At 5pm, the Kouachi brothers jumped through the doors of the printery in a suicide attack against the men surrounding them. At that same time in Paris, the police launched an offensive against the lone terrorist in the Jewish supermarket. Within ten minutes all three terrorists had fallen and the nightmare was over.

The heads of state of many nations from all over the world have expressed their solidarity for the people and outrage against terrorism. On Sunday, January 11, a “Republican March” was organized in Paris where more than 3 million people filled the streets. The following day, Benjamin Netanyahu, making a special visit to the Kosher grocery store, gave homage to the victims, reminding French Jews of their “home in Israel.” Daily, the media and the government uncover new details shedding further light on the attacks and lives of the Al-Quaïda terrorists, while the lawmakers have been working feverishly to pass legislation that would give the government more power in fighting religious extremists.

The word on the street these days, is not so much “Je suis Charlie” but more of an awkward return to work. France has come to a crossroads in which there is no returning to normal. The reactions of this fractured society include an anti-clerical atheism, a call for religious tolerance (as some are saying the journalists could have avoided this by being more tolerant), and the government working in unprecedented unity, as well as attacks on several mosques. People are slowly getting back to work, back to life and looking toward the future, which includes a new debate on how to look at “laïcité” (separation between church and state.)

A time of encouragement

Though some may be inclined to accuse God, we’ve found that more often than not, these moments lead to open doors. Normally, people don’t want to talk about religion, but now they feel they need to talk, even if that means rehashing the atheistic maxims that most are taught in high school philosophy class. Honestly, it’s an improvement, since things are being said that wouldn’t have been said a month ago. So we as a church have moved forward; we’re having Bible study, evangelism and fellowship. It’s not just us, other organizations like Jews for Jesus, have come out with a brilliant campaign using the “Je suis Charlie” motif and adding their own “Je suis la lumière, je suis Jésus” (I am the light, I am Jesus) on their tracts. I’ve also seen people encouraging each other on different Christian forums, as many are looking to what God may be doing next. Baptisms are continuing, as we had ours the Sunday after the attacks, another church held one last week and we can be sure there will be many more. At the end of the month, a citywide youth rally will be held with the theme, The Bible and the Koran (which was planned last year).

A time of grace

More than I can write in a web article this size, but I’m amazed at the immensity of His grace. It reminds me of 2 Corinthians 1:3-4, “Blessed be the God and Father of our Lord Jesus Christ, the Father of mercies and God of all comfort, who comforts us in all our tribulation, that we may be able to comfort those who are in any trouble, with the comfort with which we ourselves are comforted by God.” Yes, we’ve been shaken, but as the Lord has comforted us, we have an abundance to share with others who don’t know Him yet.

A need for prayer

As I am writing this, there is an economic summit in Switzerland, where world leaders are discussing even now what can be done. Many see these meetings, and the new unity found in combating religious extremism as a sign of the times. We need prayer; prayer for the government leaders, prayer for the church leaders, and prayer for an outpouring of the Holy Spirit. We also need sensitivity from our brothers and sisters all over the world—emotions are raw. Our world is again changing, but if we build bridges now in a time of need, we will have a more stable path to encourage each other in happier times.