The Longest Hatred – Why Antisemitism Persists 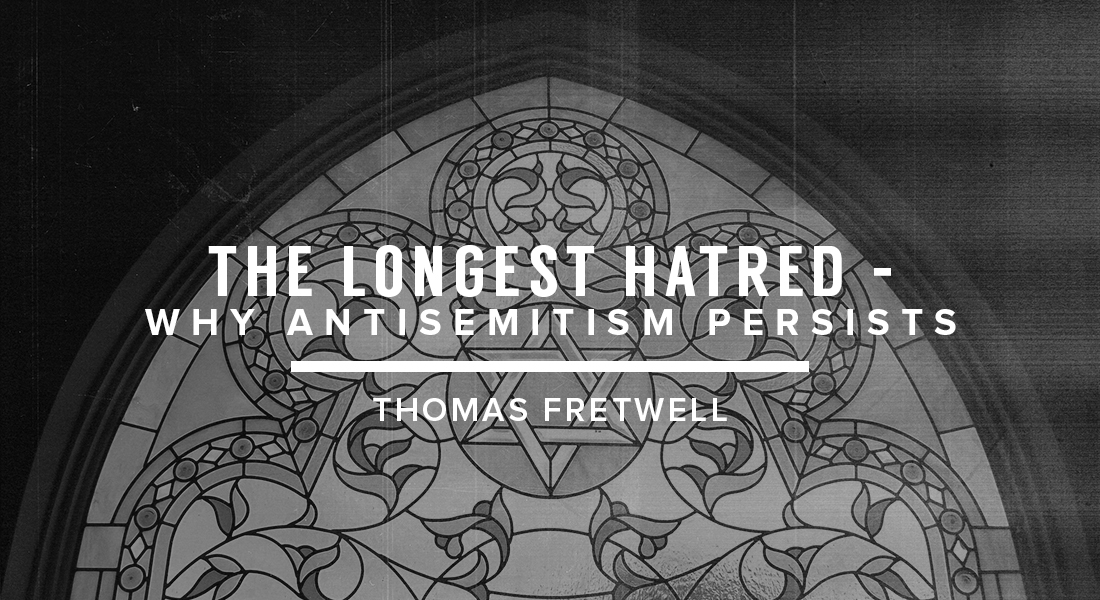 On October 27, 2018, during Sabbath worship services at the Tree of Life Synagogue in Pittsburgh, a gunman entered the premises and opened fire indiscriminately at the congregation. In total, 11 worshipers were killed. Aside from the tragic loss of life and heartbreak that will follow, the Jewish community is once again left to ponder its place as a victim of this most pernicious form of hatred – antisemitism. The shooter’s motivations were clear, as he entered the synagogue, he declared, “All Jews must die.” Such vile statements have unfortunately become part and parcel of Jewish history and indeed present-day Jewish life.

No more than a week earlier we witnessed the shocking footage of a 62-year-old Jewish man being beaten in broad daylight on his way to synagogue by a 37-year-old assailant in Brooklyn, New York. A witness reported that the attacker was screaming that “he hates Jews, and he would like to kill all the Jews.”1 Such incidents are on the rise across the western world. Such a worrying resurgence of antisemitism is not confined to the USA. In the UK, one of the major political parties has been embroiled in a summer long controversy revolving around charges of antisemitism. This same party currently has over 250 cases featuring alleged antisemitism that have been referred to their ethics panel for investigation. A recent poll conducted by The Jewish Chronicle in Britain revealed that almost 40% of British Jews said they would consider emigrating if this party gained power.

It is extremely important that we do not allow such instances to become “yesterday’s news” as the fast paced media move onto the next news cycle. We need to reflect long and hard on what this means for us as Christians. The inevitable conclusion we must draw is that Jew-Hatred is indeed alive and well. We need a clear and unified response to such a shocking reality.

As Christians we unequivocally denounce all forms of racism. At its core, racism is a fundamental denial of the ontological equality that all humans share because we are made in the image of God. Yet, at the same time, there seems to be something unique about Jew-hatred. The Late professor Robert Wistrich, head of the International Centre for Antisemitism at the Hebrew University, described antisemitism as “The Longest Hatred” and traced examples of it through from the inception of Jewish history till the present day. There is ultimately no reasonable “natural” explanation for why this is the case. The answer lies in the spiritual realm. The apostle Paul writes in the book of Romans about his Jewish kinsmen that to them:

“Belongs the adoption as sons, and the glory and the covenants and the giving of the Law and the temple service and the promises, whose are the fathers, and from whom is the Christ according to the flesh, who is over all, God blessed forever. Amen” (Romans 9:3-5).

In this passage, we are told that the covenants belong to the Jewish people. This is pivotal to understand. The biblical covenants are how God mediates His blessings to the world. The Abrahamic covenant (Genesis 12:1-3;15:18-21), the Davidic covenant (2 Samuel 7:8-14) and the new covenant (Jeremiah 31:31-34) contain God’s promises to bless the children of Israel with a Land and a Royal seed, who would go on to bless the entire world with the forgiveness of sins. The covenants contain the promises of God, the promises of God represent His character and nature, and the covenants were given to the house of Israel.

Here is the connection that explains why such disproportionate (considering the actual Jewish population size) hatred is directed toward the Jews – They are God’s covenant people and continue to be to this day (Romans 11:1). These covenants affirm the continuing place and purpose for Israel in God’s redemptive kingdom program, even while being in a state of unbelief (Romans 11:25). The satanic onslaught against the Jewish people is reflective of the attempt by Satan to discredit God by showing that His promises can be broken. Satan being the “prince of the power of the air” (Ephesians 2:1) and the “god of this world” (2 Corinthians 4:4) mobilizes the masses in pursuit of his goal. Such ambitions are expressed by the ancient enemies of Israel in Psalm 83, and similar sentiments could be listed from world leaders today:

“They make shrewd plans against Your people, and conspire together against Your treasured ones. They have said, ‘Come, and let us wipe them out as a nation, that the name of Israel be remembered no more’” (Psalm 83:3-4).

Satan has tried to wipe out the Jews through the Egyptians, the Amalekites, the Babylonians, the Hittites, the Assyrians, the Romans, the Nazis, through religions, and through politics. Yet we can have full assurance that Satan will never succeed. In Jeremiah 31 God identifies Himself as the creator of the sun, moon and stars and states emphatically that, only if someone is able to remove these ordinances, will they be able to destroy the Jews. In other words, it is impossible – the existence of the Jewish people is a testimony to God’s enduring faithfulness to keep His promises:

“If this fixed order departs from before Me, declares the LORD, Then the offspring of Israel also will cease from being a nation before Me forever” (Jeremiah 31:36).

How tragic it is that, within the lifetime of Holocaust survivors, we are once again witnessing the blatant outward expression of antisemitism in the western world. It requires a firm response from all those who understand the debt western civilization owes to its Judeo-Christian heritage. As Christians it means we must absolutely repudiate antisemitism in the strongest possible terms wherever and whenever it appears. Unfortunately, there is a sad legacy not only of virulent antisemitism within politics but also within the church. This means the church must be diligent to remove any last vestige of theological antisemitism that festers among various strands of replacement theology today. The church today must show solidarity with and assurance to the Jewish community by demonstrating to them that these charges will not go unnoticed and will not be left unanswered. In addition to this, we must continue to love the Jewish people as Christ does “with an everlasting love” (Jeremiah 31:3), minister to them with physical blessings (Romans 15:27), and ultimately, pray for the salvation of Israel (Romans 10:1).