The Sobering Gift of Leadership 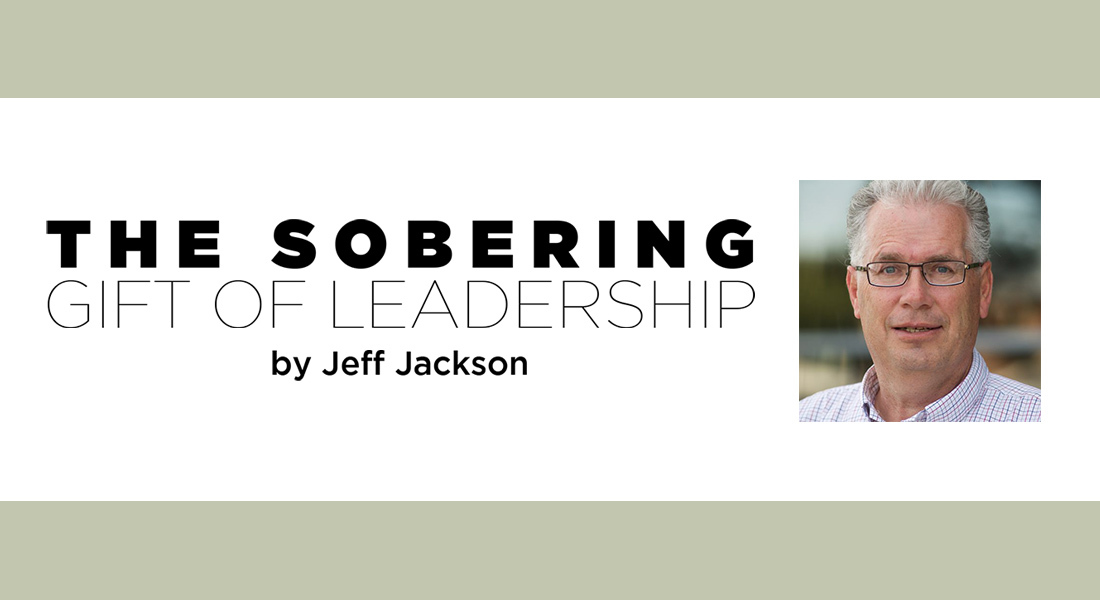 Jeff Jackson will be a workshop speaker at the 2017 Pastors & Leaders Conference, happening in 7 DAYS! Visit pastorsconference.calvarychapel.flywheelsites.com for more information or to register!

As a follower of Jesus, the greatest leader that has ever walked this earth, it’s impossible for me to not be interested in the subject of leadership. In my pursuit of understanding both the concepts and the reality produced by its being put into practice, I’ve talked to a number of leaders and read more than a dozen different books about it.

Based on what I’ve learned, I’m of the strong conviction that the Bible is the best book ever written on this important topic.

And similar to many other topics that the Bible speaks about, the lessons on leadership contained within its pages must be gleaned from the STORIES of good leaders, bad leaders, reluctant and even want-to-be leaders, that God has chosen to record. Although there are certain phrases or statements that are clearly great principles of what true leadership really is, (like serving, rather than being served), the Bible really doesn’t provide a succinct definition of what leadership is or a list of the key aspects of leadership arranged in a systematized and concise format.

Over the past few months, I’ve met with quite a few pastors and attended a handful of different churches and conferences. Doing so has prompted me to re-examine an important leadership lesson from the life of Gideon. God had imprinted it on my heart and mind not long after I discovered through other people’s input that He had entrusted me with the sobering gift of leadership–the ability to exert influence over individuals or groups of people. Please know that I apply this caution to myself first and foremost, but I believe and pray that it is of value to anyone who has been blessed with the stewardship of leading others.

I will skip over quite a bit of Gideon’s story and zero in on what I believe are a few crucial warnings that can be learned from his life and leadership.

Gideon is a member of the small clan called the Abiezrites, who are a part of the small and less than influential tribe of Manasseh (Judges 6:11,15). In response to the gathering of the armies of the Midianites and Amalekites nearby, “the Spirit of the Lord came upon Gideon,” and he blew the trumpet and the Abiezrites gathered to him. (At this point, begin thinking about how many Abiezrites may have gathered in response to his Spirit-led trumpet blast, Judges 6:34). Gideon then sent messengers to his whole tribe and three other tribes (Judges 6:35).

God told him there are too many people gathered under Gideon’s leadership, and therefore, there was a danger of them thinking that if they win the battle, it was because of their numbers and their abilities. He then goes through a process of pairing them down from 32,000 to 10,000 and then finally to just 300. They had a great victory with an army of 300 that had God’s power and creativity with them (Judges 7:2-7).

I had a few questions about this whole episode for a long time. My questions were these:

Did God know before they gathered that an army of 32,000 would be prone to take the glory for the victory? Of course. If He knew that and HE was the one who gathered them, would He make such an apparent mistake and then have to undo His mistake? Not likely. Or, is it possible that it wasn’t God’s power or Spirit that gathered them but Gideon’s personal leadership and influence that gathered them? Possible.

When the Spirit led Gideon to blow the trumpet, how many Abiezrites probably gathered to him? My guess: 300. Did the Spirit lead Gideon to send messengers to the rest of his tribe and the three others? It doesn’t say that.

Finally, here are a couple of lessons that I believe God wanted to teach Gideon, His people, and all those to whom He has entrusted the sobering gift of leadership:

1. If you have the gift, be careful to ensure that God’s Spirit is leading you to use it.

2. To determine whether it is His Spirit leading you to use your influence with people, ask yourself whether success will bring glory to Him alone, or whether it will increase your glory and status in the eyes of others and potentially even increase the pride in themselves of those you lead.

3. If you do exert your influence and it hasn’t been Spirit-led, know that He will expose your flesh-based efforts at some point and that you’ll see for yourself the disruption of other people’s lives that you have caused.

4. Know that when He is truly leading you, the number of those you lead at any moment in time is exactly the amount of resources necessary to do what He has called you to do, (similar to the five loaves and two fish).

5. Impact for His kingdom is usually inversely proportionally to size. Thinking that a large task requires a large group of people is faulty thinking. Jesus’ example of investing in a few that would eventually impact the whole world, and the history of the church itself clearly demonstrates that smaller groups of people generally have as much or even more impact as larger groups.