The Success of Succession: When Church Leaders Are Pressed to Compromise 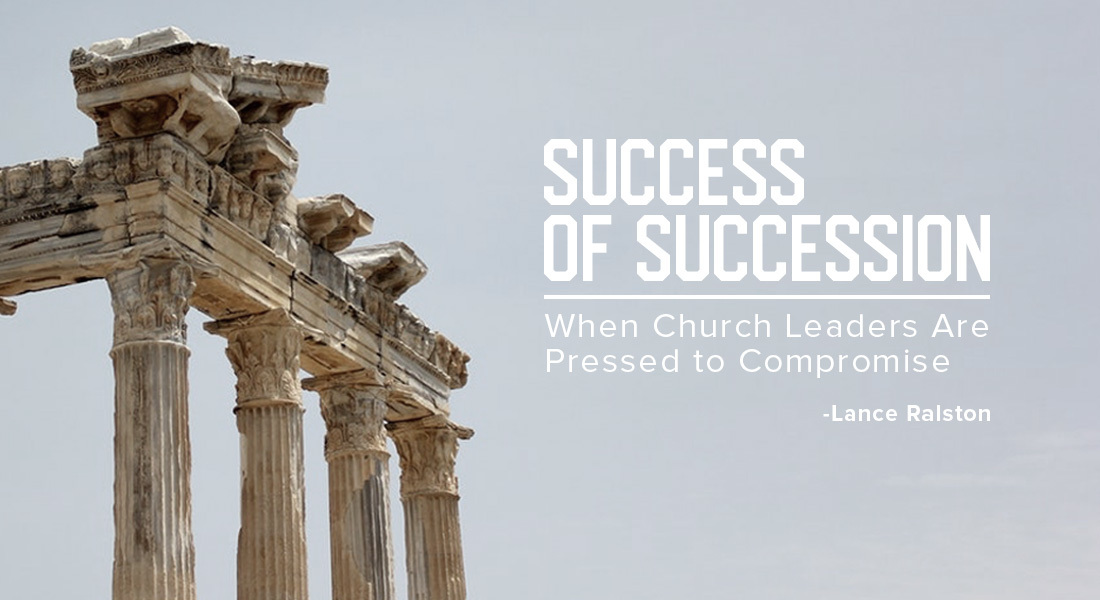 When Protestants broke with Rome in the 15th Century, Rome countered the Protestant departure with a claim to Apostolic succession: “Look,” they said, “Our leaders go all the way back to the original Apostles in an unbroken line of succession. Today’s Pope is the spiritual successor of Christ Himself. He appointed Peter, whose role as Bishop of Rome flows right down to today in an unbroken line of spiritual authority.”

That argument compelled many to keep unity with Rome. Others weren’t convinced and left to swell the ever enlarging ranks of Protestant churches.

From then till now, scholars from both sides rally support in the debate over Apostolic Succession.

There were some early church leaders who proposed the idea of succession. The first century church father Ignatius stood out as probably the clearest voice arguing for a single bishop as the leader of a local church, his office secured by his ability to draw a relational link back to the original Apostles.

The second century Father Irenaeus was also used as a support for Apostolic succession. But a close look at his writings in this regard places the principle of succession, not in some spiritual dynastic lineage; as if having an older bishop laying his hands on a younger man conferred special grace that bestowed the authority of Peter, James and John.

Irenaeus said succession consisted in a bishop’s adherence to the faith of the Apostles. It was a matter of doctrine, of Gospel-centered values and the mission of the original Apostles, passed on to their followers, from one generation to the next. Church leaders obtained authority only to the degree they were loyal to the foundation the Apostles laid. Their authority was derived directly from their adherence to what was already given; it did not originate with them or the office they held. It was certainly not passed along merely by the laying on of hands.

There are many quotes from Irenaeus to share in this regard. One of the most poignant is from his epic work Against Heresies III:24:1.

“[I have proved] that the preaching of the Church is everywhere consistent, continues in an even course, and receives testimony from the prophets, the apostles, and all the disciples through [those in] the beginning, the middle, the end, and through the entire dispensation of God. And that well-grounded system which tends to man’s salvation, namely, our faith, which we have received from the Church, we do preserve, and [that faith] always, by the Spirit of God, renews its youth, as if it were some precious deposit in an excellent vessel, and causes the vessel itself containing it to renew its youth also. For this gift of God has been entrusted to the Church, as breath was to the first created man, for this purpose, that all the members may receive it and live.”

In another place Irenaeus says:

“Therefore it is necessary to obey the elders who are in the Church; those who-as I have shown-possess the succession from the apostles. [They], together with the succession of the episcopate [bishops], have received the certain gift of truth, according to the good pleasure of the Father. And [it is necessary] to hold in suspicion others who depart from the primitive succession, and assemble themselves together in any place whatsoever. [Consider them] either as heretics of perverse minds, or as schismatics puffed up and self-pleasing, or again as hypocrites, acting this way for the sake of money and pride. For all these have fallen from the truth.”

The “heretics” and “schismatics” Irenaeus mentioned here were Gnostics, about whom Against Heresies was written. He refers often to the apostolic “tradition” precisely because Gnostics claimed to possess an original tradition; a secret teaching handed down by Jesus to the Apostles and communicated to only the Gnostic leaders. For the right fee, those leaders and teachers would pass it along to those who desired to be enlightened. Irenaeus countered by showing that Jesus’ teaching had never been secret. His life and work were and open book for all to read. The Apostles faithfully transmitted that, at first in an oral tradition, then in a written tradition, as embodied in the books of the New Testament, the Church was soon to form into the canon.

Irenaeus’ entire argument was that a genuine church existed wherever church leaders (elders, bishops) remained faithful to this oral and written “tradition.” Irenaeus did give a nod to a local church’s ability to list its lineage back to the apostles, but only insofar as they reliably adhered to the tradition of the Apostles’ teaching.

Nowhere do we see Irenaeus establish an innate spiritual dynastic line where one man hands the “keys of the kingdom” to another. And for church leaders to later in history claim special authority due to “tradition,” using Irenaeus’ work as justification for doing so is, is an egregious misuse of what he meant by tradition. For Irenaeus, tradition meant nothing if it wasn’t drawn from a faithful adherence to Scripture.

Modern church leaders would do well to remember this when they’re pressed to compromise on moral and spiritual issues.

The authority of pastors and church leaders comes from one place: God. It does not adhere to their office. A title means nothing, no matter how big the hat or fancy the label. God gives authority to fulfill His calling and mission for that person. When they step outside that role, they possess no real authority. The authority of the minister is derived from and directly proportional to their loyalty to the Apostolic message and mission.

Let’s remember there’s power in the Gospel to save the lost and transform our world. We do no service by watering it down or fudging its truth. Those who curse us today for sharing the undiluted message of the Cross, are the same ones who will thank us tomorrow for loving them enough to tell it like it is.