The Unique Command of the Great Commission: His Glory Among the Nations Part 2 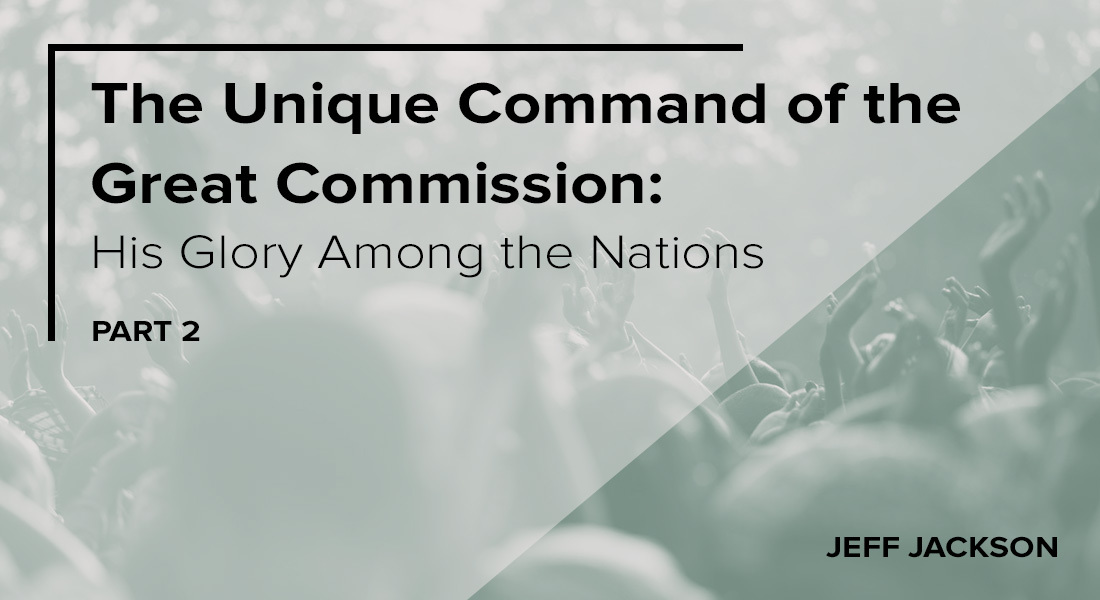 Jeff Jackson is a workshop speaker for the 2018 Missions Conference, happening this week, January 2-5. Tune in to watch live!

On more than one occasion during the time between His resurrection and His ascension, Jesus told His disciples to go to the ends of the earth, preaching the Gospel and making disciples from among all NATIONS. The most concise form of this directive is found in Matthew 28:19-20 and is commonly known as the Great Commission.

When the Great Commission is coupled with the fact that the book of Revelation describes a future point in time in which Jesus will receive worship from disciples that represent every NATION He Himself created, two important points become obvious.

THE GREAT COMMISSION IS A UNIQUE COMMAND

First, what we refer to as the Great Commission is actually one of those unique commands that includes the ultimate goal that obedience to it is designed to produce.

Second, by recording that goal-imbedded command for us, and then describing a time in the future when that goal will actually be achieved, God has made it possible for us to measure how much progress we’ve made in accomplishing the mission we’ve been given.

But in order to gauge our success in carrying out the command, it’s essential to know what the Greek word is that our English Bibles translate as NATIONS. Without knowing what the original word was, and what it meant at the time Jesus used it, we could make the mistake of thinking He is referring to countries or nation/states as we know them today, like Mexico, Vietnam, Russia, India and so forth.

WHAT DOES THE WORD “NATIONS” REFER TO?

The Greek word that is translated into English as NATIONS is ETHNOS. The core concept it communicated had to do with people viewed as members of groups that were distinct in some way from other groups. These groups were comprised of people that had a shared language, culture, religion, history or even physical features, all of which distinguished them from other groups.

ETHNICITY is the word in our language that is the closest to the core meaning of the Greek word at the time the New Testament was written. ETHNIC GROUPS is the term we use to describe people viewed as members of groups that are distinct in various ways from other groups.

Although on a few occasions, the word ETHNOS does refer to countries as we know them, whenever we see the word NATIONS in our Bibles, the simplest way to ensure we are as close as possible to the meaning Jesus; and His disciples would have assigned to the Greek word, we should think of ethnic groups, NOT countries. Thus, the command and the guaranteed outcome is for those who already know Him to participate in making disciples from among every ethnic/people group.

QUESTIONS THE COMMISSION AND THE GUARANTEED OUTCOME PROVOKE

Aided by modern technology, complex research methods and specialized terminology that enables progress to be measured, it’s now possible to categorize all the people on the planet into different groups based primarily on language, along with other key factors.

A few different ministries, some of which are listed below, compile this kind of information and thanks to their efforts, we can now answer the following Great Commission-related questions more accurately than ever before:

. How many different spoken languages exist on the earth today?
. How many ethnic/people groups are there?
. What country or countries do these groups live within?
. Has the group ever been presented with the truths of the Gospel in their heart language, the one they think in, pray in and use when speaking with their family members at home?
. Have any of the people within the group become disciples of Jesus?
. Is there a community of Jesus-disciples within the group that gathers regularly and has the vision and the resources to make disciples among their own people without outside help?

The ministries that do People Group research and provide the statistics don’t all use the exact same definitions or categorize using the same criteria. With that in mind, here’s a bit of a composite of the three most relevant terms and what each term refers to:

ETHNIC/PEOPLE GROUP (PG): The largest group through which the gospel can flow without encountering significant barriers of understanding and acceptance.

UNREACHED PEOPLE GROUP (UPG): When the percentage of evangelical Christians within the people group is less than two percent.

UNENGAGED UNREACHED PEOPLE GROUP (UUPG): A people group that has no intentional disciple making and church planting strategy taking place to reach them. Without these things, they are still considered UUPG’s, even if the group has been adopted and is receiving focused prayer. (All UUPG’s are by definition, UPG’s, yet all UPG’s are not necessarily UUPG’s)

When the actual statistics produced by the different ministries are compared with one another, the bottom line looks something like this:

. There are 16,839 distinct people groups in the world
. Of that total, 6,997 are categorized as Unreached (UPG’S)
. At least 1,347 of them are considered Unreached Unengaged People Groups (UUPG’s)

Based on some of God’s people taking the command and it’s guaranteed completion seriously, and due to the radical leap forward in a variety of technologies that has taken place in the last 40 years, we are the first generation of Christians in history that can accurately measure the impact of our obedience.

Yet as in so many other instances with the realm of how God works, the privilege of knowing how much of the task has been accomplished and how much more remains, brings with it the responsibility for every Christian and every local church to actively engage in helping to make disciples from among those people groups that are still UUPG’s.

Knowing all of this, it should be inconceivable that any followers of Jesus or local churches could be apathetic, and yet they are. Which is why I’m convinced they are in need of a Mordecai message and moment.

To begin participating in helping that guaranteed outcome to be a reality, here are some great resources:

Finally, here’s a short video that summarizes the statistics.