What Should I Do? Response to the #MeToo Movement 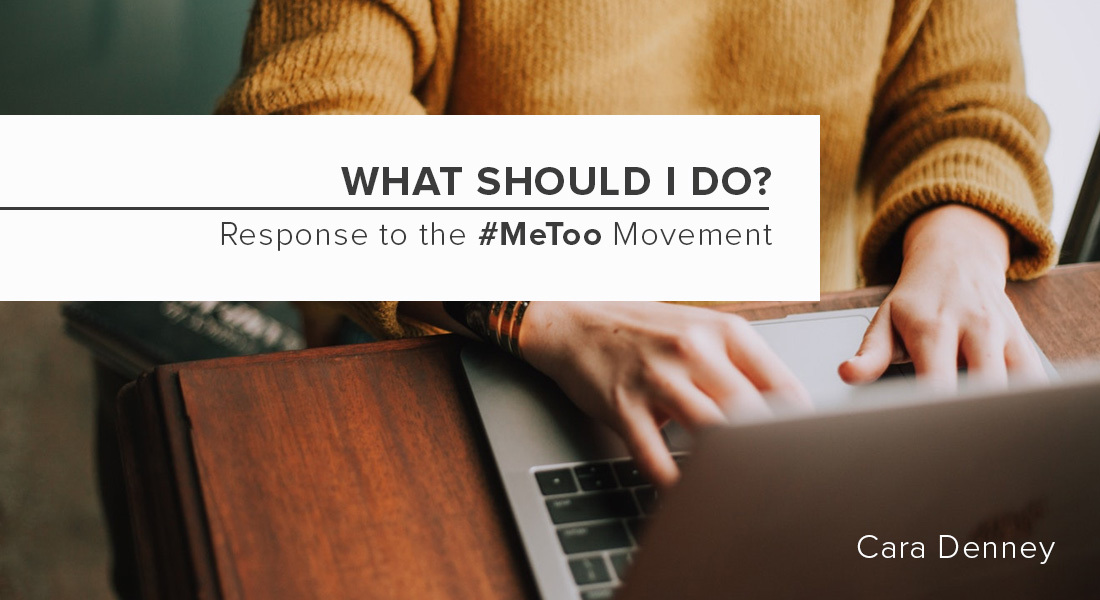 One point seven million tweets in 85 countries, 90% within the first 48 hours. More than 12 million Facebook posts, comments and reactions exploding online in less than 24 hours. TIME magazine’s “2017 Person(s) of the Year.” Who is everyone is talking about? The answer: those breaking the silence with their personal accounts of sexual harassment, assault and abuse.

The #MeToo sprung up in response to unprecedented accusations of sexual assault from Hollywood against one of their own. It quickly went beyond viral across every form of social and mainstream media.The fact that the internet is heaving under the weight of the tsunami of #MeToo (and now the YouTube video testimonies by Olympic gymnasts abused by their team doctor) should not come as a surprise. One in six women in America has been raped and every 98 seconds an American is sexually assaulted. Every eight minutes that victim is a child.

Look around wherever you are reading this right now. If there are six women around you, at least one is likely to have been raped. Maybe it’s you. Or your co-worker, your friend’s daughter, your boss and on and on. It’s definitely LOTS of women you know, whether you realize it or not, whether you think about it or not. If it hasn’t touched you personally, it’s hard to get your head around it. It’s a hard issue.

And not everyone who has the unfortunate credentials to allow them to post #MeToo will, nor should they. It is a very personal choice. So add to the overwhelming statistics the fact that many won’t or are not ready to add their name to the list, and it further underscores the enormity of this issue.

A Hard Subject via a Hard Media

But even if we acknowledge the sheer numbers, it’s hard to face the ugly reality that is sexual assault, especially as relayed via social media.

We strip down in the doctor’s office to see wounds and scars at their point of impact. Sadly, people are also stripped naked for pornography. One to heal, the other to exploit. Unfortunately, the Internet is an unpredictable and often slap-in-the-face mishmash of both of these scenarios and so has, understandably, left many overwhelmed and keeping their distance from the issue of sexual assault, and therefore, the Me Too testimonials.

But as believers we declare that, “You will know the truth and the truth will set you free.” So at least some of the idea – if not the campaign itself – behind the Me Too movement is something that we, as people of the light, people of the truth, understand and support. Walking in the light and helping others to do the same is at the center of what we are all about. “We are not of those that shrink back…” the writer of Hebrews reminds us, and although the context was different, the truth remains. Christians are those that are called to be bold on the side of truth and justice. This campaign also reminds me of the Bible’s admonition to “mourn with those that mourn.” Because what can you do but mourn when you read one after another of heart-wrenching stories of abuse? Or have you read them? Should you read them? Were you even aware of this campaign or of the overwhelming statistics?

We can’t be aware of every issue in the world. But one in six? Every 98 seconds? And every eight minutes, a child? Even if you’re not on social media at all, you probably watch the news, talk and interact with people, and if all else fails, you’re here reading this, and so now you know.

Sexual Assault is a Huge Problem.

Social media is the “Town Square” of our age. It is where people are standing on soapboxes discussing issues of the day. Some are shouting nonsense while others are declaring the Good News. And many, many more are crying out in pain.

Sometimes their cries “fit” neatly within my paradigm, but more often than not, I have to confess that even their very “cries” offend my sensibilities and are difficult to process. When horrendous things happen, people often react in horrendous ways. Yet I want to try to listen. Because this is where people are talking. Jesus and His disciples were always where people were talking. They were listening. They were asking questions. They were sharing truth. Why? For one reason. Dissent is not the enemy of truth, but rather silence. When people stop talking, stop listening, stop asking questions, the flame of truth is shuttered, and the light cannot shine into the darkness.

“Does Anyone See That I’m Hurting Here?”

A while back I experimented on my Facebook page. I asked my friends and family that do not consider themselves “Christian” or that no longer are involved in regular church attendance, to answer a few questions. I asked my Christian friends to NOT respond. I wanted to know, “Do you feel like the Church cares about the things that you care about and the hurts you have?”

Overwhelmingly, the answer was, “No.” People went on to say, both publicly and privately, that the last place they would go when hurting would be to the Church. Whatever their reasons, however they came to this perspective, whether its according to “facts” or not – this breaks my heart. People are hurting, and they think we don’t care.

Not long ago I was with a group of women, all veterans of full-time Christian service, who gathered to look at this issue of abuse from a Biblical perspective. Almost all had endured some form of sexual harassment, abuse or assault. In the story of the Good Samaritan, we saw that we are all both the wounded man on the side of the road, and those that either pass by or the one who stops.

When the Samaritan stops, he doesn’t ask the man whether he was really wise in choosing the time of day he was out on the road. He doesn’t take notice of whether or not the clothes the man was wearing might make him more of a target to thieves (showing his wealth, etc.). He didn’t even ask whether he had been drinking or in bad company or anything that might have also made him more vulnerable to attack. Seeing that he had been there awhile (we know he was there long enough for others to pass by), the Samaritan also didn’t ask why the man hadn’t immediately cried louder so that someone might have stopped earlier. Nor did he, God forbid, suggest that maybe the man was lying, had faked the whole scenario because he somehow had a plan to discredit others, or get something for himself. (And even if that was the case, wouldn’t that man sort of be the most hurting of all, but in a completely different way?)

No, he simply saw the man wounded and hurting, unable to help himself, and had compassion.

Step by step the Samaritan was obedient to do what he could. Not everything. Not all at once. First and foremost, he simply saw the man in need. He noticed. Then he stopped. He gave immediate care from the resources he had. Then he sacrificed of his own time and money to get others to care for the man when what he had wasn’t enough. Finally, he made a commitment to be seriously involved in the process of the man’s complete healing. But before all that, he did the most important thing – he had compassion. This is where it all starts. This is where our Good Samaritan, Jesus, found us – broken and hurting on our way – and had compassion.

The Samaritan wasn’t out looking for wounded travelers to help. Maybe it wasn’t his ministry. He was just on his journey and came across the wounded man. The Samaritan didn’t know the whole story. He didn’t have all the details. But he saw and heard someone hurting. Like when you scroll through your Facebook feed, check your twitter account, hear someone on the news, just look around at those on your path through life – people are hurting. (Facebook reports that 45% of their users have a “friend” that posted with the MeToo hashtag declaring that they too had endured sexual harassment or abuse.) So…#MeToo…and then what?

Maybe You Don’t Know What to Do.

That’s ok. You don’t have to. Just stop. You see someone by the side of the your road, so stop. Be the Good Samaritan. Samaritans were despised. Dare I say that in social and mainstream media the Church is often seen in less than a positive light? What if, like this Samaritan, the one that stops by the side of the hurting was the very one that was least expected to? The one that many despised.

You see someone by the side of your road, so stop. Notice their hurt. Ask the Great Physician what you might do, what resources you have, what sacrifices and commitments He would call you to make. Verbalize your compassion. Saying – “I’m so sorry this happened to you” or, “I’m sorry you’re hurting,” doesn’t make any endorsements nor judgement calls. Compassion merely shows the heart of Jesus.

Compassion is such a rare commodity on social media. Can we, the children of God, lead in this? I believe we can. And many are doing that and much, much more.

“’Which of these three do you think was a neighbor to the man who fell into the hands of robbers?’ The expert in the law replied, ‘The one who had compassion on him.’ Jesus told him, ‘Go and do likewise’” (Luke 10:36-37).

After 20 years serving in Ukraine, Cara now serves in Hungary. You can read more of her writing at truth4wholeness.com.