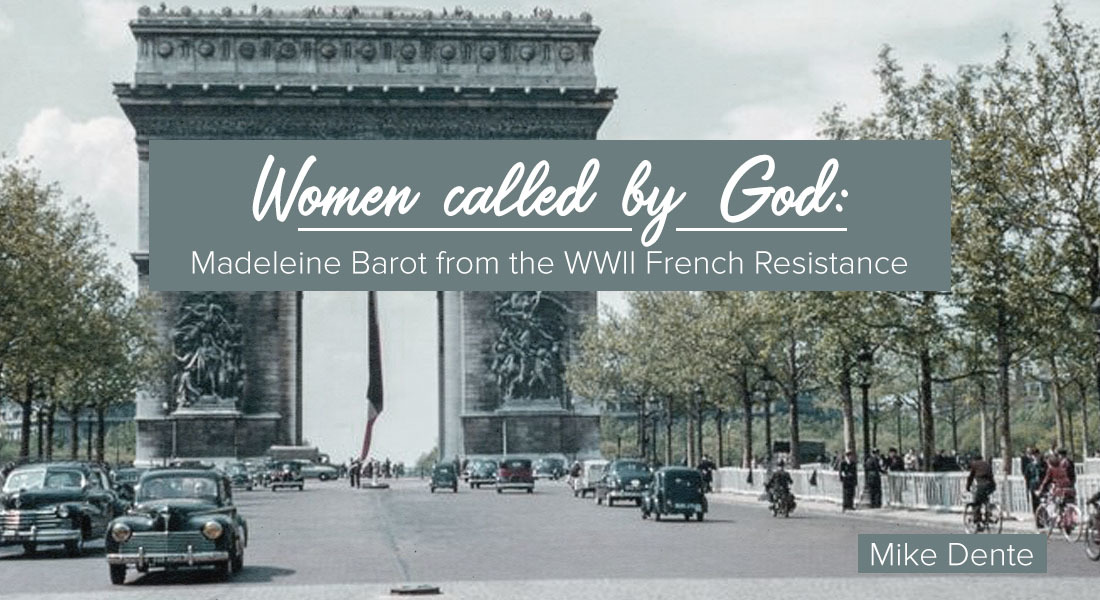 The Righteous Among the Nations is an honorary title given by the State of Israel that signifies those non-Jews who risked life, position and family to save Jewish people from the Nazis. Poland, The Netherlands and France are nations with the most names on the list, each country counting over 4,000 people responsible for saving lives. The Righteous includes dignitaries, clergy, school teachers and mostly private citizens.1 Reading their names can be daunting with so many heroes, and yet, for the most part, very little is known about their story. Yet, thanks to their contributions, new generations have been born that share in the eternal and temporal scope of their actions.

Madeleine Barot was one such woman who was also a leader in youth ministry when World War II broke out.

With sandy blonde hair, thick glasses and a wiry smile,2 she looked like a librarian or an intellectual. But engaged in the Resistance by saving lives, she doesn’t fit the part.

She was born into a family of teachers in Chateauroux in the center of France. Finished her studies in Paris at the Sorbonne, she interned at the National Library before going to Rome to work in Government Archives. In 1939, when France declared war, Madeleine returned home and joined the Fédé, a protestant student association where she dedicated much of her time.

When the Nazis invaded, she was asked by the president of the French Protestant Federation, another member of the Righteous, Pastor Marc Boegner, to lead a project called La Cimade (Comité inter-movement auprès des évacués) a Christian movement to help displaced persons during the war.3

After the defeat of the French armies, the country was divided into two: North and South. The North was called the occupied zone under direct Nazi control. The South, led by Marshall Philippe Pétain, set up its government in Vichy. At the time, it was believed that the “Vichy Regime” was autonomous, and many people fled to what they hoped would be freedom. In reality, they were collaborating with Hitler, and it wasn’t long before internment camps were set up with tens of thousands of occupants within their boundaries.

Madeleine Barot began her work among these camps and secretly organized the escape of Jewish prisoners.

The internment camps, organized by Pétain’s government, weren’t for extermination but more of a holding facility until the prisoners could be transported to Drancy in the North and eventually to Germany. Prisoners, both men and women of all ages, were held there, even entire families were delivered and divided upon arrival. Daily she would show up at the front gate, inventing reasons to get in from blankets for newborns, to providing medicine for the elderly. In the beginning she was refused entry, but her infatigable presence became so unavoidable that she was able to develop a permanent presence for La Cimade in the camps. She also knew how to work with a diverse team of people with the goal of saving lives.4

Among the tactics used was creating false paperwork, hospitalizing patients, changing names and camouflaging children in the local school system. Much of her work was done through a small mountain town of 3,000 inhabitants called Le Chambon-sur-Lignon. It’s impossible to know an exact figure, but it’s estimated that Ms. Barot, the local pastor André Trocmé and many discrete individuals were able to save the lives of around 5,000 people during the war. Almost twice the size of the village’s population. They hid them in the school systems, private families, the church and eventually guiding them to their escape in Switzerland.5

Speaking about her work years later she said, “During the war, we weren’t doing charity work, not really; we wanted to express our solidarity with the victimes.”6

After the War, Ms. Barot continued her work for la Cimade. She was an activist of faith and although I haven’t been able to find many direct quotes from her, I can’t help but think of the words of Jesus in Matthew 5:16, “Let your light so shine before men, that they may see your good works and glorify your Father in heaven.”

Her work speaks loudly of one willing to risk her life but not interested in any glory for herself, much like her Lord. For this reason I find her life inspiring. There was no hope for recognition but a constant reality that she could be found out, arrested and finish her days in a concentration camp. In fact, she didn’t work alone, she didn’t work only within her denomination but was creative in involving, it would seem, everyone she knew. She let her light shine, and God blinded the eyes of those who would stop her.

Over the years, the Lord has used many like her, brave, young women using their gifts in ways no one else could.

I can attest in my own limited experience in ministry that God has sent and used quite a few women of faith like her to go out into the mission field when barely a man could be found. Historian Ruth Tucker wrote, “From the earliest of times women have been involved in evangelism. Beginning in the New Testament and throughout the period of the early church and the Middle Ages and on into the era of modern missions, women have served effectively…but the common thread among virtually all of the single women missionaries who sacrificially served abroad was a sense of a calling from God-and equally important, a sense that they could make a difference.”7

Indeed, Madeleine Barot made a difference and the opportunities to go out into the work by vocation of Christ’s initiative have in no way diminished. The field is still white and ready for the Harvest. There is still a need for many more workers to go out, both men and women, as well as strong support teams to send them.