A Thousand Year Tug of War: The Marriage of Church and State 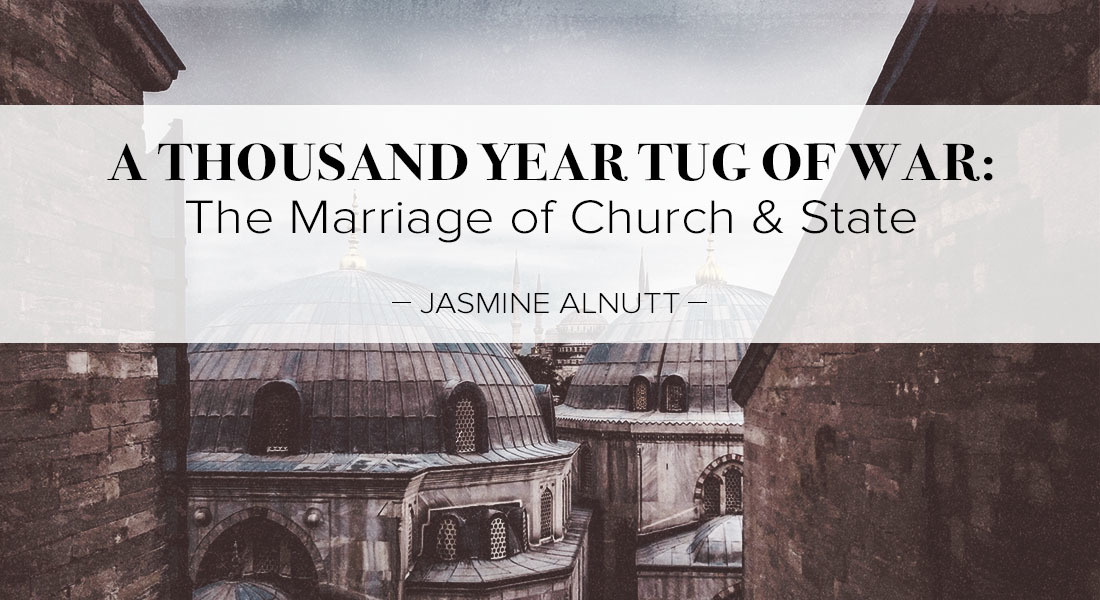 In many ways, the reign of Constantine over the Roman Empire was one of the most far reaching and influential in western history. One of the most significant aspects of his influence was his perspective of Church and State. When Constantine brought the Church and State together in society, he was simply applying his Roman worldview to the situation, since religion—specifically emperor worship—operated in connection with the government. Therefore it is no surprise that the emperors who followed him continued and even expanded on this policy—and not necessarily for the spiritual good of the Church!

While Constantine did legalize and promote Christianity, paganism was still prolific in the Roman Empire. That all changed when Emperor Theodosius I (347-395 A.D.) made Christianity the official religion of the Empire in 380 A.D. This was the moment in which the Church-State union was truly established.

Essentially, it could be said that the Church and State were “dating” under Constantine and were now “married” under Theodosius.

Theodosius’ decision had some interesting and unexpected ramifications.

As has been noted concerning Theodosius, “He used his power to officially enforce orthodox Christianity, but ended up placing his power under that of the church, setting a standard for more than a millennium.”1Unexpected indeed!

Theodosius was crowned co-emperor in the East in 379 A.D., and accepted Christian baptism soon after this during a serious illness. The following year, he proclaimed himself a Christian and proceeded to issue the edict declaring orthodox Christianity the official state religion. Around 391 A.D. Theodosius went a step further and made paganism a crime, closing down all temples and forbidding pagan worship. By asserting his authority to establish Christianity in this way, Theodosius believed he was aligning his will with the will of God; in essence, he claimed to be God’s representative on earth, presiding over the Church as he would the government.

Unfortunately, Theodosius could be rather high-handed and aggressive. The epitome of this aggression was his handling of a riot in Thessalonica around 387 A.D. When a favorite charioteer was imprisoned on accusations of homosexuality, the people revolted, murdering the governor and freeing the charioteer. When Theodosius heard about this incident, he ordered his soldiers to trap the people in the arena during a chariot race and fall upon the crowd. Seven thousand defenseless Thessalonians were murdered in cold blood, arousing the indignation of not only the citizens, but the Church!

Bishop Ambrose of Milan, a leading church figure and spiritual advisor to Theodosius, took a bold stance, refusing to give Theodosius communion until he humbled himself, took off his royal robes and publicly repented. Since Theodosius claimed to be God’s representative and the leader of Church and State, he really had no choice but to comply with Ambrose’s request. The implications of this were enormous. As historians have stated, “It marked a new chapter in the history of church and state. For the first time, a secular ruler submitted to the Church. Less than a century earlier, emperors were trying to wipe out the Church.”2 A mind boggling shift indeed when put in that context!

This turn of events suggested that the Church had authority even over the Emperor to some degree.

From this time on, the Church began to grow in its authority and influence. The marriage of Church and State had initially created a tug of war, which led to a power struggle that would prevail for centuries.

When Justinian came to power, the western half of the Roman Empire had recently dissolved; yet he succeeded in establishing a strong empire in the East. His goal was not just to try to put band aids on the old empire, but remake it, and by the end of his reign, he and his wife Theodora had largely succeeded!

These two were quite a sociopolitical force and introduced many progressive policies.

Theodora in particular influenced legislation that prohibited sex trafficking and infanticide, as well as instituting the death penalty for rape. For his part, Justinian supported these measures while fighting to retrieve many of the Western Empire’s lands and peoples.

Much of Justinian’s desire to reunite and rebuild the empire came from his views concerning Church and State. He wrote, “There are two great gifts which God, in His love for man, has granted from on high: the priesthood and the imperial dignity. The first serves divine things, while the latter directs and administers human affairs; both, however, proceed from the same origin and adorn the life of mankind.”3 He felt that if these God-ordained functions were being carried out properly, then the world would have general harmony—which he believed was signified by a united empire!

It was such views that were spelled out in his legal code, the Corpus Iuris Civilis (Body of Civil Law), more commonly known as the Code of Justinian. The ideals expressed in this code eventually were assimilated throughout Europe as the Law of Church and State. It was strongly Christian and anti-unbeliever; in fact, Justinian made apostasy punishable by death, closed down famous schools in Athens because of their pagan teaching, established churches (the most famous being the Hagia Sophia, considered one of the greatest architectural feats in history) and enforced laws in support of Christian morals and teaching (more legal rights for women, laws discouraging divorce, etc.). As Jennings puts it, “Justinian’s religion was of an active kind.”4 However, like Constantine, Justinian believed the emperor should reign supreme in church affairs, which had its drawbacks! In fact, the eastern branch of the Church in particular never really came out from under the emperor’s authority.

So in effect, Justinian made even more concrete that which Constantine and Theodosius had laid a foundation for concerning the empire and the Church.

We could say that Constantine legalized Christianity, Theodosius made it the official religion, and Justinian articulated the Church-State relationship, a relationship that would prevail in Europe for the next 1,000 years until the Protestant Reformation.

In order to attain a proper understanding of any historic event, concept or movement, it is of paramount importance to appreciate its context. It is in understanding the concept of the Church-State alliance, and its formation that we come to realize why it was so pervasive in the centuries that followed; and why it became so difficult to uproot from Western civilization. As we can see, church history reveals how easily well intentioned decisions can have unseen negative repercussions for future generations.