Finding Life When Everything Points to Death 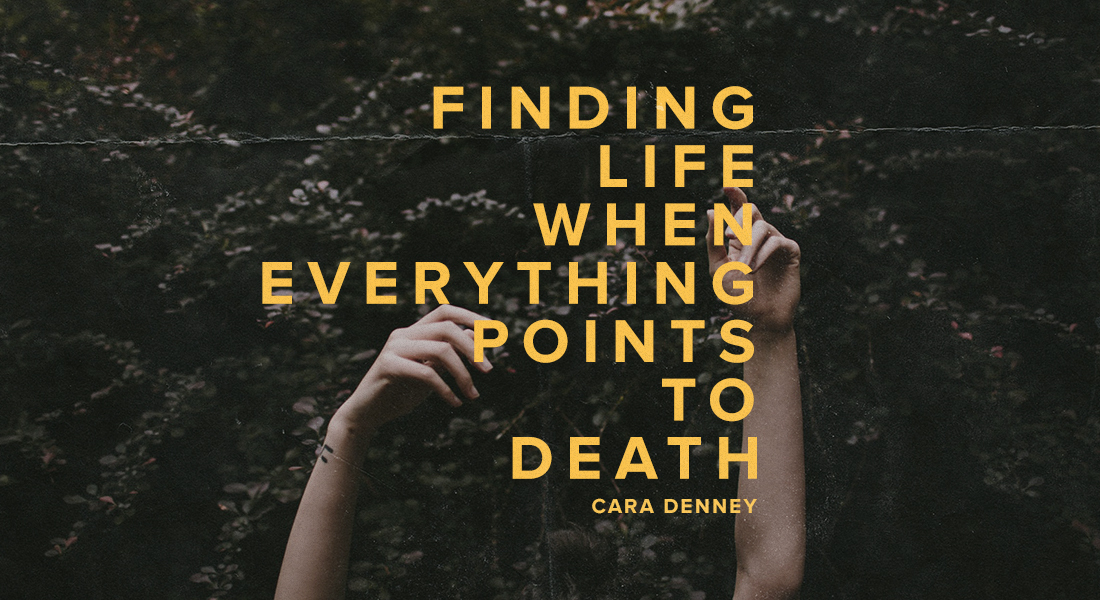 “The house was filled with people weeping and wailing, but he said, ‘Stop the weeping! She isn’t dead; she’s only asleep.’ But the crowd laughed at him because they all knew she had died. Then Jesus took her by the hand and said in a loud voice, ‘My child, get up!’ And at that moment her life returned, and she immediately stood up! Then Jesus told them to give her something to eat. Her parents were overwhelmed, but Jesus insisted that they not tell anyone what had happened” (Luke 8:52-56).

The little girl in this story was dead, and Jesus gave her life again. And believers hear this, nod and say, “Yes, yes,” and non-believers laugh like those in the crowd. Understandable…for both sides.

I can imagine that those laughing were laughing because “they KNEW she had died.” They were looking at the facts. Is that wrong? Of course not.

Jesus was saying something that did NOT make sense.

He was using words that seemed foolish, naive and completely illogical. I would think that laughing at that moment was a knee-jerk reaction that many of us would have had….if we didn’t really know (or had forgotten!) who was speaking to us.

Were the followers of Jesus in that crowd laughing (or weeping) too? I bet they were. I don’t know about you, but I too often find myself chuckling along with Sarah in the Old Testament when told she would have a child in her old age…”who me?” I look at my circumstances, and I think it is completely ludicrous the promises God whispers to my heart. “I can’t do that! It doesn’t make sense in light of who I see that I am. I’m weak here and here and have failed here and here!”

Or I’m among those weeping. Things around me seem dead. I feel dead. There is no life in me. Or so it seems. I see it. People around me see it. “They all knew she had died.” Its obvious. Then fear and victimhood does not feel like a choice, but a much stronger enemy ready to destroy me. And that’s what God calls our enemy… “a roaring lion, seeking whom he may devour.”

But, oh, the joy I still find in my heart when I read the rest of the story! Jesus didn’t stand beside her and yell, “DON”T BE A VICTIM!” Nor did He yell at those laughing and say, “HAVE COMPASSION!” He didn’t belittle or demean anyone, as is too often my temptation. He simply took the little girl by the hand and spoke to her. And she got up. But not before life returned to her. She couldn’t have done anything while she was dead. I can’t choose or do anything, (and nor can you, let alone stand up out of death!), until life returns.

Thankfully, He didn’t ask her to do anything that He hadn’t already given her the ability to do.

“God sent His Son into the world not to judge the world, but to save the world through Him.” I can only speak for myself, but if God hadn’t given me new life, hadn’t lifted me out of death once, and thankfully, repeatedly again every moment of every day – I could never choose as I ought…and I KNOW Jesus! I know His love and care for me. So how can someone who doesn’t even know Him do that? And yet He gives that choice…not so much to choose better or even do better, but to choose Him.

But as hope-filled as all this is, I actually haven’t gotten to my favorite part of this story! She was dead. Everyone knew that. No one was thinking of any needs she might have (especially the little girl herself), other than maybe her funeral arrangements. No one but Jesus.

And not only was He many steps ahead of anyone’s understanding of the situation, He already had a plan for who He would call on to help meet the needs of this hungry, once dead little girl.

If you already have trusted Jesus for forgiveness for your sins but still feel there is “death” in your life…dead relationships…dead opportunities…dead dreams…dead hopes…would you join me and trust Him again?

Would you stop right now and listen for His voice? I don’t know why I run from those times alone with Him when He calls me to trust Him again, but I do. The stench of death overwhelms me, and before I know it, (through as much my passive choices as my active ones), I “choose” victimhood. But you know what? God is ok with that. He doesn’t freak out or abandon me. He doesn’t get angry with my weakness or tell me to face the facts. He has a plan bigger than my fears or the facts…bigger than my lack of knowing Him…bigger than anything that I would choose over Him. And His desire is for me…for life…for joy…to feed my hunger. Even the hunger I don’t even know that I’m about to have, once He breathes life into me.

But when we’re in that “dead” state, we can’t see past our circumstances…but thankfully, Jesus sees further. He knows when and how He will take your hand and raise you up… AND He knows what your need will be after that… AND He already has a plan on how to meet that in your life! Stop and think about that for just a second!

I always think everything depends on me…but it doesn’t.

It never has, and it never will. Sure, He graciously invites me to participate in His plan…but He breathes life into me…He speaks to me in death and lifts me up into life, and He even calls on others to help meet my needs!! Amazing! Overwhelming! Humbling! So much love!!

I want to choose hope and compassion over fear and victimhood. But before I can do that, before you can do that, we need to choose Jesus. We need to – like all those in this story – look honestly at our circumstances and agree with Jesus where there is death in our lives.

Did you know that the Greek word that we usually translate into English for “confess” literally means “agree?” To “confess” our sins means just to agree with God. Agree with the One who is always kind, always patient, always ready to receive us. Agree that – like everyone who has ever walked on this earth – we are not perfect and have sinned and can never attain to the holiness of God unless He reaches down and breathes life on our lives.

And if you’ve done that sometime before – whether it was trusting Him just this morning in prayer or many, many years ago in a life that seems so far away like it was someone other than the life you’re living now – would you trust Him again? Would you confess the pride, or jealousy or fear that threatens to kill the life He wants to bring to you in every area of your life?

It’s scary to see who we really are….but only if we don’t know or have forgotten who He really is. He is the one who not only brings life, but prepares a banquet in the presence of those laughing, those standing in enmity against us….even if it’s ourselves. Because our enemy, Satan, “comes to kill, steal and destroy, but Jesus comes to bring life, and life abundant.” Choose Jesus. Choose life. He is calling you to life out of death. He knows what you have need of. He loves you so.

After 20 years serving in Ukraine, Cara now serves in Hungary. You can read more of her writing at truth4wholeness.com.