Funky Feet and Fixed Focus: Lessons and Warnings on LOVE 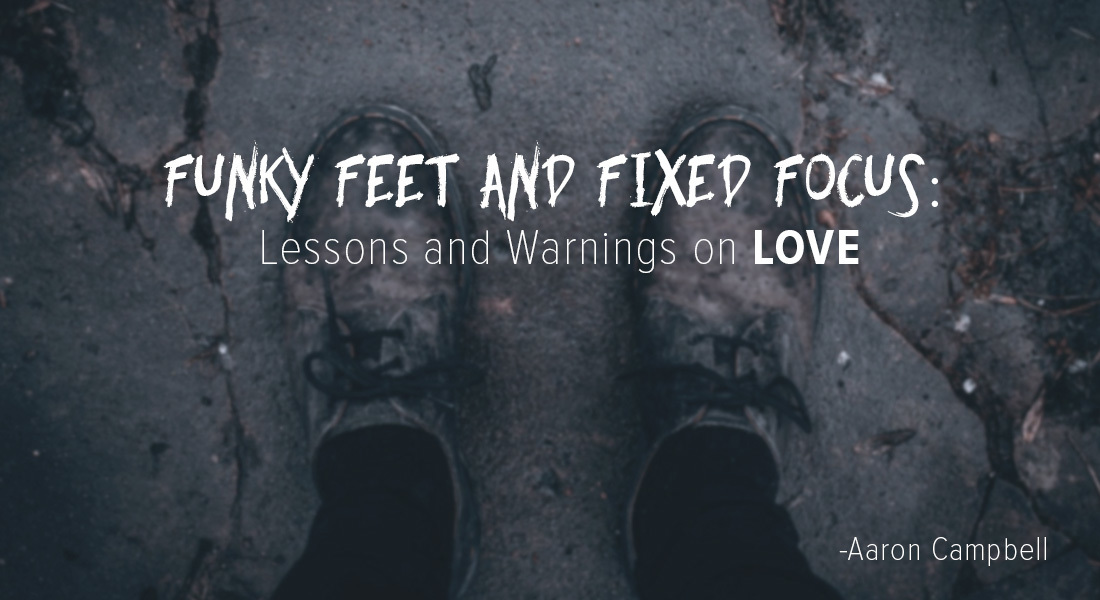 “Forgive me for being so ordinary while claiming to know so extraordinary a God.”
—Jim Elliot (1927-1956), martyred for sharing the love of Christ.

In the next article, I will tell you about when a heavy jug of aged, North Philly [homeless-and-possibly-heroin-addicted] urine splashed onto my bare feet and flip flops, how fast I dashed to the nearest North Philly bathtub to douse my legs in straight bleach, and how fast it subtly made my heart “wax cold” that day.

The risky side of ministry. The limitations of our own hearts. The necessity of God’s Spirit.

But first and most importantly, let’s go back 2,000 years to the most amazing night in human history, and its timeless anecdote for every emotion, moment and situation.

Surveying the Holy Land on the eve of the Crucifixion, you saw dichotomies in every direction. You saw crowds of worshipers wearing their very best, and you saw beggars showcasing how much they had nothing. You saw those on the edge of their seats with reverent anticipation, and you saw Roman soldiers sharing strong drink like it was just another day. You saw golden vessels in the temple, and you saw dingy Roman instruments of torture in the Antonia Fortress right next to the temple. Yes, dichotomies were everywhere.

But then there was the ultimate dichotomy. In the Upper Room, as our Lord sat with the disciples [and Judas] at the Passover meal, Jesus the Christ—King of kings and Lord of lords, the great I AM, the Creator who became clay (1 Timothy 3:16), the Infinite who became an infant (Isaiah 7:14), the true “Governor of the feast” (John 2:7-10)—exhibited the ultimate dichotomy: The holy Messiah—of such eternal purity that made even the priceless spikenard seem like sewage by comparison—rose from the dinner table, wrapped a towel around His waist like a house slave and began washing the disciples’ [and Judas’] feet—taking all their dirt and foul odors upon Himself with joyful ownership (Zephaniah 3:17).

Alas, the One who should’ve been served and washed by every person in that room, by every person gathered in Jerusalem and by every human and angel in existence! It is He who actually performs the most abject form of servitude, Himself. Why did He do this? Well, He gave the answer when He finished the foot washing: “I am giving you a new commandment, that you love (agápē) one another. Just as I have loved you, so you too are to love one another” (John 13:34, AMP). And there you have it. In that Upper Room with 12 of the planet’s most blessed theologians—who shamefully enough, had just finished envying each other and arguing over who was the greatest (Luke 22:24).

Jesus gave a loving yet shocking rebuke and reminder of what this thing called Christianity is all about: LOVE.

But not a mere phileō love, where you simply love those whom you feel some type of connection with (as Jesus taught that even the grimiest of sinners are capable of that (Matthew 5:46). But rather, agápē love—a love not motivated by feelings, but motivated by esteeming others better than yourself (Philippians 2:4); a love unlike anything this world can produce or fathom; a love where you actively seek to treat every human being the way you yourself would [ideally] wish to be treated (Matthew 7:12); a love that is divine in origin. It is that “Good Samaritan” love that will cross any social, cultural, socioeconomic or racial barriers to fully give one’s compassion, time and resources to literally anyone and in any place (Luke 10:29-37). It is a love that will even do this for our enemies. It is a love that is not spelled L-O-V-E but rather S-A-C-R-I-F-I-C-E. Why it is the very love that moved the Father to give His only begotten Son for treacherous humankind.

I try to imagine the conviction that fell upon those in that Upper Room. At that moment, the most blessed theologians on the planet realized just how theologically “off” they had been. For as Paul said by the same Spirit through which Jesus washed their foul feet, “If I have all knowledge, enough faith to move all mountains, give away all my possessions, and even embrace martyrdom itself, if I don’t have [agápē] love, I AM NOTHING (1 Corinthians 13:1-3).

No doubt, the disciples couldn’t help but stare anew into Jesus’ eyes—the gateway to His blessed heart—as they watched their King so lost in joyful, other-centered agápē (even washing the feet of His own betrayer after announcing that there was a snake at the dinner table). And to this very day, as the Word makes clear, it is not just a mere look at theology itself that realigns our hearts with the very “eyes” and heart of Jesus, but rather, a fresh entering into His presence through His living Word (2 Corinthians 3:18), prayer (Jude 20) and His Spirit (1 Corinthians 2:10). And how we need to be ever mindful of the vast difference between doing our daily devotional studies as mere “theological calisthenics,” and actually seeking and experiencing the very presence of Jesus, Himself.

Fast forward now to our present day, where this “Information Age” keeps us all tossed to and fro, from place to place and thought to thought, overstimulated and bombarded until we are benumbed by bedtime. Self-promotion and self-care are being propagated everywhere (2 Timothy 3:4)—the very opposite of [other-centered] agápē—as it even seeps into the church like invisible gases in a coal mine. Only, just as the at-risk coal miners would never dare take their eyes off the gas-detecting “canary bird” (the first sign that something is dangerously wrong in the coal mine), we as the church are all too often taking our eyes off the [gas-detecting] dove —the “grieved” Holy Spirit of God (Ephesians 4:30).

We are no different than the disciples as they ignored Jesus sitting right next to them while arguing over who was the greatest.

In the Olivet Discourse, Jesus said that our very day—these “last days” precipitating His return —would be a day where believers’ hearts would “wax cold” (Matthew 24:12). And this sobering warning is definitely talking about believers (and not unbelievers, as I once thought), because He uses the word “agápē,” which only born again believers can possess (Romans 5:5; Colossians 1:27). Jesus says that this “waxing cold” would be due to such “abounding iniquity” (e.g. such uncanny levels of lawlessness and drama, such overwhelming amounts of grieving information and grieving statistics, such callousing news reports from calloused news reporters, and no doubt, even calloused sermons from calloused pastors, along with calloused church members with no desire to give their pastors basic honor—let alone the “double honor” that the Bible commands (1 Timothy 5:17)—which alone can even make the loneliest, battle-wearied pastor suddenly feel loved and alive again.

In our professing Christian culture that is increasingly leaving its “first love” in exchange for a self-satisfied, impotent “lukewarmness” (Revelation 3:15-17), we are cooling off in our love for God, and inadvertently, cooling off in our love for everyone else. The deceitfulness and wickedness of the human heart cannot afford this (Jeremiah 17:9). Just as in the fashion world, where gurus have coined the peculiar phrase, “brown is the new black,” there are even arising some peculiar “switcheroos” in today’s love-waxing-cold church:

Well, being the beautiful, merciful and faithful Great Physician that He is, Jesus gives us the guaranteed remedy.

He commands us to be honest about the lukewarm and cold places of our hearts and be “zealous” (i.e.[Greek] “be on fire”) in repenting about it (Revelation 3:19). Then, may we come back to remembering and celebrating our Lord’s eternal love for us—“the first works” (Revelation 2:5)—just as He called wayward Israel to remember just where His saving (and sanctifying) love had brought them from (Ezekiel 16:1-14).

So let’s seek to love each other and “wash each other’s feet” like never before. Let’s be like Paul, who “exercised himself” to always have a conscience void of offense toward God and toward men (Acts 24:16). Let’s exhort one another anew about the easy trap of becoming “busy and religious.” Because while this confused world is drowning in false wisdom (worldviews), false senses of security and falsities at every turn, and while we are indeed called to “give an answer to every man” (1 Peter 3:15), Jesus made abundantly clear that one of our greatest apologetics to this world would be the way we agápē one another in the church (John 13:35; Galatians 6:10). Let’s be still and let Jesus wash our feet once again (and again, and again, and again), until our hearts melt anew from His unfailing love, and may all those around us receive the evidence and fruit like never before.

“It is not great talents God blesses so much as likeness to Jesus.” —Charles Spurgeon. 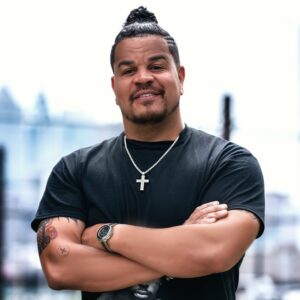 ​Aaron Campbell is the founder and lead pastor at Antioch Christian Fellowship. He is also part of the CGN Leadership Team.