One day Paul and his ministry buddy, Silas, got thrown into a filthy prison for freeing a slave girl from demon possession. The local magistrates ordered them beaten and placed in stocks in the inner dungeon, a place full of rats, disease, and all kinds of filth. Nobody had washed off their dried blood, and now it was caked on their raw backs. In fact, no one did anything to help them. They simply left them in this miserable condition.

Imagine if you were thrown in a Tijuana jail, with no one to bail you out. No one knows where you are; they know only that you went on a ministry trip to Mexico. They have no idea why you haven’t returned. No doubt you’d be wondering, What’s going to happen to me? How long will I be here? And you’d probably ask, “Why, God? Lord, did You really call us to Mexico? Did we make a mistake?” Questions would fly through your mind. But my question to you is: How do you suppose you would react?

Paul and Silas reacted by singing praises to the Lord.

Sitting in those painful stocks, the two men prayed and sang praises. The other prisoners heard them—and you can well imagine the crude remarks they employed to tell Paul and Silas to just shut up. But at midnight the bars began to shake when a strong earthquake rumbled the very foundations of the prison. All the cell doors burst open, awakening the guard. Figuring that the prisoners had all escaped—and fearing his inevitable and severe punishment—the guard took out his sword to commit suicide.

“Don’t do harm to yourself!” Paul called out. “We are all here.”

In the darkness the guard sought out Paul and Silas, and in a trembling voice said, “Sirs, what must I do to be saved?” God used Paul’s miserable condition to bring another soul to Him.

When we find ourselves in difficult, confusing circumstances, what a great opportunity we have to pray and to praise the Lord! You might not be able to praise God for your circumstances, but you can praise Him. Because even though your feet are locked in stocks, your spirit is free. Rather than feeling sorry for yourself because of your physical misery, you can sing praises to your Lord. You never know who might be listening.

But that takes a transformed heart!

As you pray and sing, you will find your faith growing and your worries fleeing. Soon you can find yourself rejoicing in the goodness of God, in the greatness of His power and the immensity of His love, knowing He’s in control and Jesus will not fail.

As a young boy my brother had serious asthma attacks. Whenever he would get one, my mother would come into the room, lift him out of bed and carry him to an old rocking chair that squeaked whenever someone used it. My mother would rock him in that chair, and as I would lay there in bed, I could hear him wheezing and fighting for breath. I could also hear my mother singing: “Jesus never fails, Jesus never fails. Heaven and earth shall pass away, but Jesus never fails.” That song became her anthem.

As my three siblings and I grew up, we often required Mom’s help. She would pray and she would sing, “Jesus never fails.” It became so much her life theme that when she died, we had those words inscribed on her tombstone. If you were to visit my mother’s grave at Fairhaven Cemetery, you would see the words, “Jesus never fails.” And He hasn’t yet, and He won’t.

The really interesting thing is that not long ago I was in Santa Barbara, presiding over a memorial service for a relative. My mother’s mother had been buried at that cemetery. So we asked at the office where we could find my grandmother’s burial place. They showed us its location on a map and after the service we went looking for my grandmother’s grave. I had never been there before, so you can imagine my surprise when we found it and I read her tombstone: “Jesus never fails.”

What a marvelous testimony to pass down from generation to generation. You can put that on my tombstone when I go: “Jesus never fails.”

You may be going through some hardships. There may be some difficult things that you just don’t understand—the “whys” of whatever is happening to you. But know this: He loves you, He’s concerned, He knows all about it, He’s in control, and Jesus will not fail. That conviction, more than anything, will transform you into a follower of Christ whose heart beats wholly for Him.

– excerpted from Love The More Excellent Way by Chuck Smith 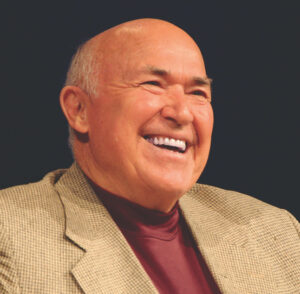