Lessons from History: How to Avoid Christian Self-Promotion 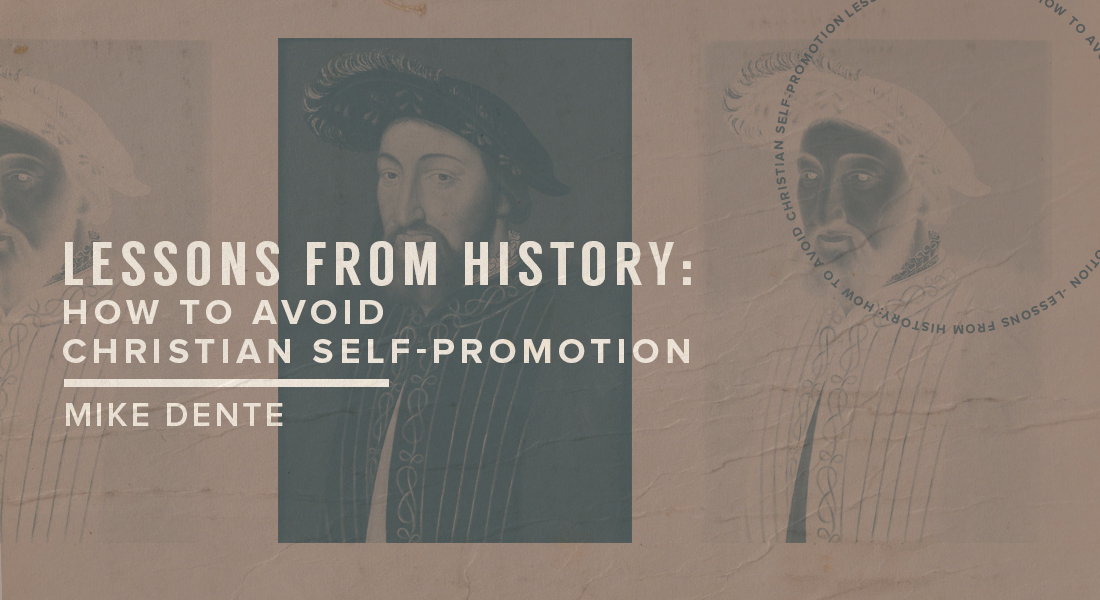 International relations. What a mess. What a picture of unregenerate human relations on a diplomatic scale. And yet nations have gone to great lengths to keep the peace with sometimes honorable results. We celebrate national holidays, remembering those who died in wars. Wars, which are often the result of failed international policies and the cycle goes on. Then there are those attempts at diplomacy like the one that occurred between the kings Henry VIII of England and Francis I of France during the Renaissance known as the “Field of the Gold Cloth.”

Tensions were rising between the two nations. Ah, the English and the French. Mais oui! But as their respective monarchs were somewhat related and as they were enjoying a time in history, when people were supposed to be more reasonable, it was decided the two would meet in a neutral location—just outside of Calais.

Both kings were fiercely proud of their culture and wealth.

They erected an entire village out of tents for each country. The tents were made of the finest materials including golden thread to show off the monarch’s power and opulence. They organized games, balls and feasts, each side trying to impress the other. The mood was light but competitive, proud and strategic. The finest athletes from each camp competed for their kingdom’s honor but in no way were the two sovereigns to compete directly with each other. This was an event to discourage war, to build ties of brotherhood and marry off their children.1

Then it happened. One king in his zeal for his own glory stuck his proverbial chest out too far. A challenge was issued and national honor suddenly was at stake. The Showtime series, The Tudors, gives an interpretation of this challenge.2

Yes this really happened. They didn’t look like current day male models, but they really did wrestle. What inspired me about this page of history wasn’t just the mental image I got of our own world leaders wrestling for peace, although I did have a good laugh. No what inspires me is the aftermath. Upon his return, the embittered Henry VIII took a detour to visit rival Charles V and struck a deal in a more humble setting.3 This treaty, and not the Field of Cloth, would change European history.

In the end, all the pomp and self-promotion did nothing to promote peace between England and France.

Looking at matters from our perspective of history, it stands to reason that if two people insist upon outdoing each other to become friends, they will inevitably clash. In light of the Gospel, we see an even darker side to their behavior.

Jesus was the One who knew no sin to become sin for us that we might receive His righteousness (2 Corinthians 5:21). The exact opposite of self-promotion. Seen in this way, our efforts at self-glorification, even if they are unconscious, are contrary to the way we’re called to walk (Micah 6:8).

Are we as Christians guilty of the same error? As sinners, yes. Christian self-promotion can go from displays of how humble we are, how much we are praying for someone, to how many people we’ve personally led to the Lord. Quite honestly, it doesn’t tend to bring brothers and sisters together. That being said, there is nothing wrong with sports, games or friendly competitions between believers where each side is doing their best. That’s enjoying life and being a good teammate. The trash talk before or after the game, well, that might be another story as our two wrestling kings have already proven.

In the same way, in the professional world, one may have to remind their boss of what they are doing especially when reviews and pay raises are at stake. Artists will have to promote their work, and anyone looking for a job should make their résumé stand out. But this is not the same as reminding friends how incredibly awesome your life is and not taking the time to hear if others might be crying around you.

In response to this, some have chosen self-deprecation as a false form of humility. Notice that Charles V, was in no way self-deprecating. He was wisely humble. Humility is seeing ourselves for who we are. It begins by looking through God’s truth. In the light of His Word we see that we are sinners to the core. The prophet Jeremiah even speaks of our heart being so darkened that we can’t discern it ourselves (Jeremiah 17:19). We recognize that even the good things we do are often motivated by unworthy desires. In a word, we are sinners. But the truth also tells us we are saved by grace (Romans 3:23-24).

Through rebirth, we become children of God.

This means we belong to Him in the dearest way. We don’t have to prove ourselves; He has already accepted us and welcomes us to come find His affection to warm our soul. We are now identified in Him, not by what we do, but by who we’ve become and one day, who He will make us to be. In this way through His Spirit, He makes the coward brave, the former thief honest, the angry person peaceful and even humbles the proud to boot.

The beauty to this approach is its inevitable pull to glorify God. Jesus-promotion is an entirely different attitude all together. It brings people together and recenters their conversation and vision on the One who is truly worthy of all praise.

CalvaryChapel.com does not necessarily endorse or agree with every outside source attached amongst the diverse pieces of content. By providing these pieces, we hope to help you stay informed of important events, conversations and ideas taking place in the world that are relevant to the Christian faith.