The Adventure of Advent: Day 23 – Can I Get a Hallelujah? 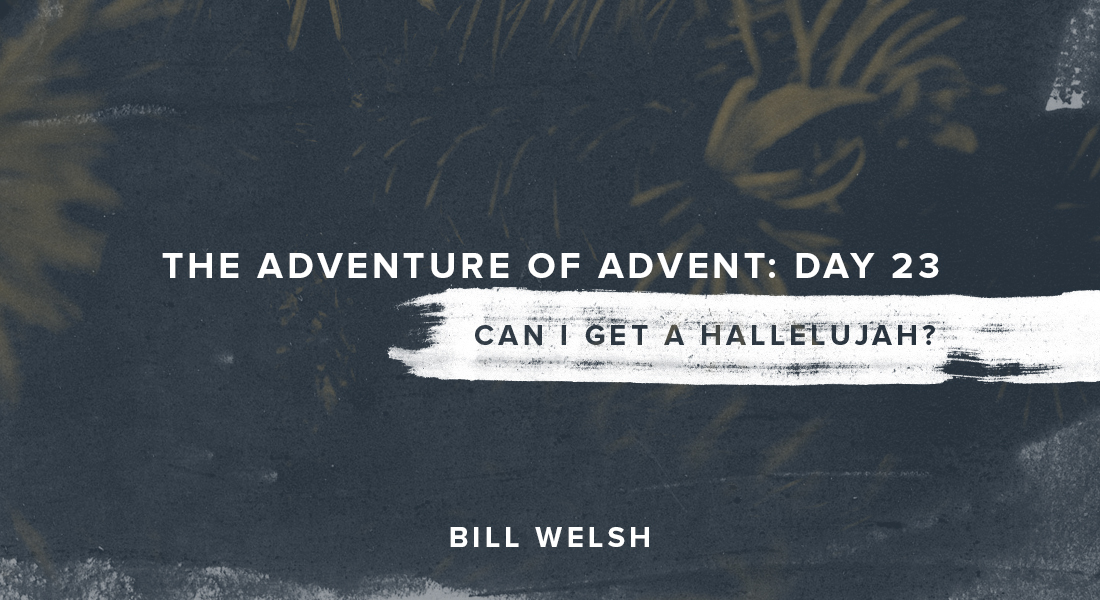 “Suddenly there was with the angel a multitude of the heavenly host praising God and saying: ‘Glory to God in the highest and on earth peace, goodwill toward men’” (Luke 2:13-14).

Few people knew He was coming. The world was taken by surprise, though all Israel had waited and hoped for Messiah. But they never guessed the big event would be staged in the heart of Bethlehem farmland.

Yet, there was a multitude tracking His progress months after months. Perhaps months passed more quickly from their perch, high above our “time-space” continuum. I’m speaking of angels. Heavenly host. They were poised to party. Ready to sing, shout or proclaim, “Glory to God in the Highest, and on earth peace, goodwill toward men.”

If angels smile, you know they were smiling big that Bethlehem night. And they had to tell someone, so they traumatized the shepherds to inform them their Petah Tikvah (Hebrew for “Door of Hope”) had just arrived. They knew what Jesus was coming to do.

The one thing I wonder is whether or not they’d been commanded to celebrate or had volunteered, unable to keep back their exuberant shouts of “Glory to God.” I picture “fist-pumping, wing-flapping, trumpet-blasting” praise. This was no stately choir but more like a scene in the stands of the Rose Bowl on New Year’s Day after The Ohio State Buckeyes win a Championship (Go Ohio!). Perhaps it was somewhat reverent, but this was the beginning of a revolution. The first of many victory chants…“WELL DONE, GOD.”

Their work was not done. Thirty-three and a half years lied ahead, but Jesus was here. The Messiah was on site. And that was worth a party. Can I get an AMEN?