The Era of Constantine: When Church Met State 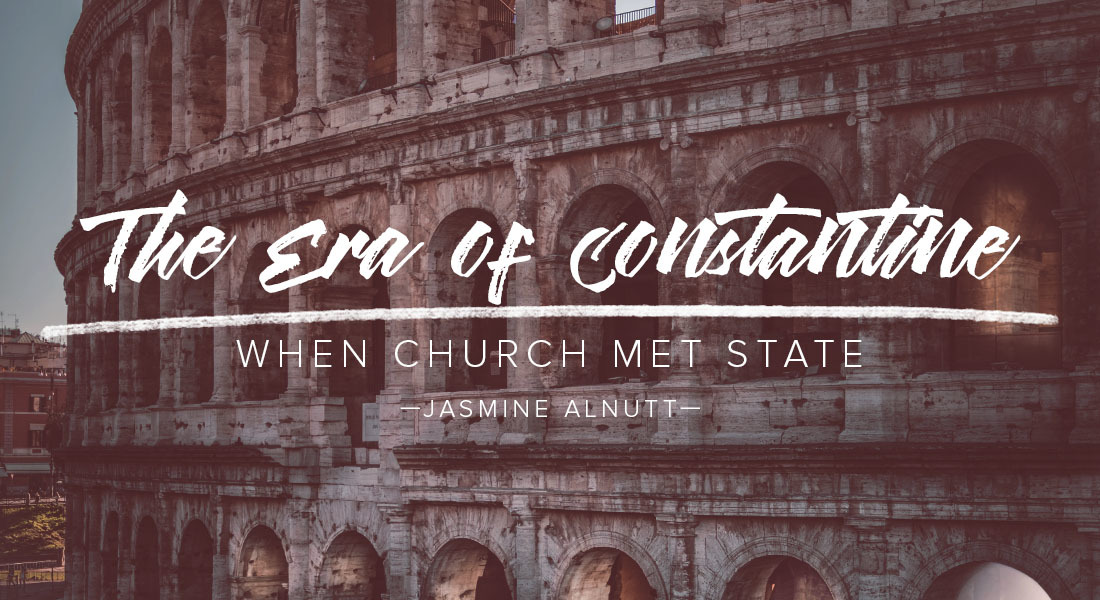 For the first three hundred years of its existence, the Christian Church was generally viewed by the Roman Empire as either an enigma, a fringe group or as a legitimate threat. Therefore, Christians did not consistently enjoy the rights and privileges of other people in the Empire; in fact, on many occasions they were stripped of any rights at all! Never was the Church fully accepted or given complete freedom of worship.

But what would happen if all of that changed? What if Christians were not only accepted as legitimate, but were given favor and support by the Emperor himself? It must have seemed unthinkable, but that is exactly what happened when a man named Constantine became the Emperor of Rome in 312 A.D.

Constantine’s rise to power was gradual.

In 293 A.D. Emperor Diocletian had created a tetrarchy of four rulers (including himself) to share control of the Roman Empire. When he and his co-Emperor, Maximian, abdicated the throne in 305 A.D., a general named Constantius became Emperor of the western half of the Empire. However, Constantius died the following year, leaving this major responsibility to his son, Constantine.

In 312 A.D., the year after the Edict of Toleration was issued to end the persecution of Christians, conflict broke out between the different factions of the tetrarchy. Constantine decided to take care of this problem by stomping out the rivalry and taking supreme control of the entire Empire for himself. It was a risky proposition, considering his main rival’s army was four times bigger than his; but as he prepared for battle, he saw a vision of the Cross and the phrase, “In this sign conquer.” He was convinced that this was a sign from the God of the Christians that he should attack, and after it resulted in victory at the Battle of Milvian Bridge, he declared himself a Christian.

Although many historians consider this a mere political conversion, noting that Constantine knew nothing of religion without politics, it seems that Constantine genuinely considered himself a Christian on some level. As a result, he supported Christianity openly, and in 313 A.D. issued the Edict of Milan, granting official freedom of worship to the Church. Latourette adds, “Beginning with Constantine, Christianity seems to have had some influence upon the laws of the realm. Constantine appears to have endeavored to rule as a Christian, to make the Empire safe for Christianity, and to create a world fit for Christians to live in….

Constantine’s legislation against gladiatorial combats seems to have been inspired by the Christian faith. So do his edicts in behalf of widows, orphans, and the poor, and against immorality…infanticide, the selling of children into slavery, prostitution….”1

In fact, Constantine and his mother, Helena, were at the forefront in funding new church building projects (called basilicas) and spreading Christianity around the Empire. Constantine’s personal devotion was questionable—he didn’t fully do away with paganism, and he was a conspirator and murderer, having killed his own wife and son—but his actions clearly bolstered the position of the Church during his reign. After facing nearly 300 years of sporadic persecution and hostility, the Christians found themselves enjoying rights and privileges that had been denied them since the Church began!

Although many Christian contemporaries considered Constantine the “man of the hour” whom God had raised up, his conversion was both a blessing and a curse to the Church. As Shelley puts it, “The advantages for the Church were real enough, but there was a price to pay.”2One historian noted that Constantine “proceeded to create the conditions we call ‘state church’ and bequeathed the ideal to Christians for over a thousand years.”3

Essentially, the Church and State were now made one under Constantine.

And the long-term ramifications of this were monumental, as seen in terms of the following:

CHURCH BODY: Constantine’s conversion and connection with the Church instantly made Christianity a popular, trendy religion in the Empire; people certainly did not have to count the cost to follow Christ as they once did! This allowed the infiltration into the body of Christ by many who had no genuine understanding or interest in the Gospel, but were flocking to the churches simply in order to obtain favor with their newly Christian Emperor. Never before was it as attractive a proposition to become a Christian as it was now, especially in terms of sociopolitical advancement! As Shelley notes, “Prior to Constantine’s conversion, the Church consisted of convinced believers. Now many came who were politically ambitious, religiously disinterested, and still half-rooted in paganism.”4 It was a situation remarkably akin to Jesus’ parable about the wheat and tares in Matthew 13:24-30.

While this was clearly a great opportunity for the Church to bring the Gospel of Christ to the Roman masses, it unfortunately opened the door for paganism and secularization within the Church as well. In fact, over the next few centuries, the Church incorporated practices like the veneration of saints and angels, the use of statues and icons in worship and an unbiblical reverence for the Virgin Mary, all of which were an indirect result of pagan views brought into the Church since the reign of Constantine.

CHURCH GOVERNMENT: For the Romans, state religion was perfectly normal, and so Constantine believed that as Head of State he was also Head of the Church to some degree. Therefore, he had the right to be involved and even exert authority in church affairs; as a result, he presided over major Church councils, a precedent which future emperors would follow even when they did not fully understand the theological issues at stake. Shelley notes, “Constantine ruled Christian bishops as he did his civil servants and demanded unconditional obedience to official pronouncements, even when they interfered with purely church matters.”5

Because in his mind the Church and State worked together in society, Constantine also gave many bishops judicial and legal authority in addition to their spiritual authority. Not surprisingly, by the end of the fourth century, many bishops and church leaders became corrupted by their political power. The results were profoundly detrimental to the spirituality of the Church.

CHURCH DIVISION: One political decision that made an enormous impact on the Church was Constantine’s choice to move the capital city of the Empire. Because he was facing many foreign attacks in the East, Constantine felt he needed a stronger, strategic presence there. As a result, he established the city of Constantinople in 330 A.D. as his new capital, so that suddenly Rome was no longer the preeminent city that it had always been. This would eventually create a huge rift between East and West.

As the Church and State were by now so intertwined, the Church could not escape being influenced by this decision, and the political divide soon led to a religious divide as well. As time went on, the two great political cities, Rome and Constantinople, also became the home of the two great branches of the Church—the Roman Catholic in the West and the Eastern Orthodox in the East. Tragically, because of growing theological and cultural differences, the two sides continued to drift apart; never again would the Church be truly catholic (universal) as in the Early Church Era.

Clearly Constantine’s decisions and policies had a massive impact, not just on the Roman world, but on the Christian world as well!

In some ways his rule seemed to be a blessing, and in his day he was greatly appreciated by the Christians. Bennett notes, “Certainly there can be no question that Constantine was a great blessing to the church. Scarcely in history have we observed such a complete and rapid transformation of a state’s values as the one that occurred in the age of Diocletian to Constantine. In one generation, the church went from suffering its greatest interference to enjoying its greatest patronage.”6

However, it is also clear that Constantine’s marriage of the Church and State had detrimental ramifications that would create enormous controversies and problems for the Church in future generations. Alvin Schmidt points out just a few of these issues: “Even worse were the many contradictions that surfaced in some of the teachings and life of the organized church: tolerating clergy corruption, often on the highest level; condoning slavery; burning false teachers at the stake; and incorporating secular theories into doctrines and then defending them as biblically correct.”7

It is easy as Christians to sometimes wish that the government were fully on the side of the Church. Yet as we clearly see in the example of Constantine, perhaps we should be careful what we wish for.

Anything that distracts the Church from its true purpose—obeying the Great Commission and preaching the Gospel—will eventually do more harm than good. As Schmidt summarizes, “The mere outward conforming to the Christian faith, rather than being spiritually transformed, became all too frequent in the life of the church. It often impeded the spiritual transformations that were, for the most part, so vibrant and effective during the church’s first three hundred years.”8 Be careful what we wish for, indeed!