The Gospel Comes to Ireland 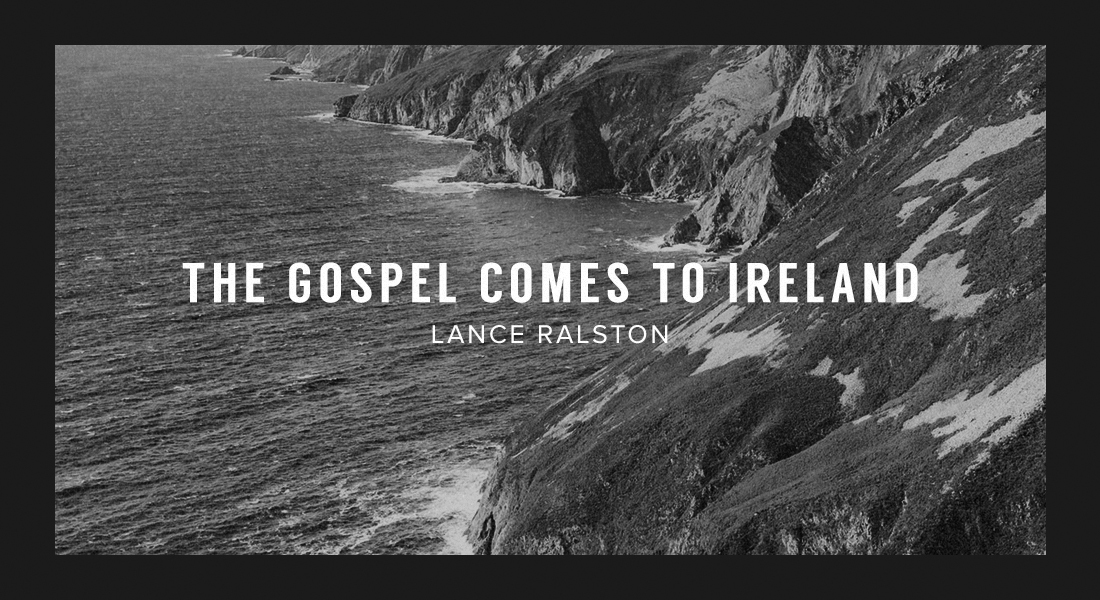 The rope was so tight round sixteen-year-old Patricius’ wrists they’d bitten into the flesh. He no longer felt the sting of the saltwater from the wind-tossed waves splashing over the side of the boat headed back to the home of his Irish captors. They’d nabbed him during a raid on the west coast of Britain where he lived with his Romano-British noble family.

Patrick recounts little of his six years as a slave except to say he was a swine-herd who regularly knew hunger, thirst and isolation. The loneliness moved him to seek the God of his Christian parents. God answered.

At twenty-two, Patrick heard a voice telling him to fast in preparation for a return home. A short time later the voice spoke again: “Behold! Your ship is prepared.” He struck out for the coast, 200 miles away. When he arrived and informed the captain he was supposed to board, the captain recognized him as a runaway and refused. Now fearful of being turned in, Patrick began to move away. He made it no further than the other end of the ship when one of the crew shouted at him to hurry up and board. They were short-handed and thought to use him as a novice seaman, paying his fare by the hard work of a lowly deckhand.

After a short foray in Northern France, Patrick finally made it back to his home in Britain.

Try as he might to settle down, he sensed God’s Spirit calling him to back to the land of his captivity. But he regarded himself as ill-prepared and sought theological training and ordination. Once obtained. He set sail for the Green Isle.

How Patrick evangelized Ireland is an important case study because it opens to us the mind of Christian missionaries during this period. It also helps us understand the troubling religious syncretism that infected the medieval church.

The native religion of Ireland at that time was dominated by the Druids who held near complete control over the Irish, a control enforced by abject terror. Human sacrifice was a regular practice. Patrick’s plan was to confront the Druids on their own turf. He understood the only way to make headway among the Irish was by freeing them from their fear. To do that, he’d need to look to the power of God to trump any demonstrations of demonic power the Druids conjured up.

Patrick’s medieval biographers take this kernel of truth and spin elaborate yarns about his confrontations. Many of those stories are likely fictional while a few are based on real events. The larger lesson for us to glean is Patrick’s method of evangelism.

The idea had grown among theologians of that time that pagan religions weren’t so much anti-Christian as they were pre-Christian.

Patrick in no way approved of paganism or considered it an acceptable variant of the Gospel. He believed there were supernatural beings behind the idols and ideals of paganism; demons who kept people in spiritual bondage. He believed miracles and magic did occur. After all, Pharaoh’s magicians used supernatural power. But—and here’s the key to Patrick’s methodology; the God of Moses was more powerful, and used His power to bring good while demonic power served only to promote ruin.

So when Patrick arrived with the Gospel, the druids moved swiftly to kill him. They found it harder than they thought. None of their plots worked. It was as if a supernatural wall protected him. While trusting himself to the protection of God, he also took practical measures to gain allies among the Irish by building amiable relationships with them. These allies kept him informed of the various plots.

A turning point in Patrick’s mission came when an Irish chieftain named Laoghaire came to faith.

This chieftain had a group of powerful druids who advised him but who were unable to defeat Patrick in demonstrations of supernatural power. When a couple of those Druids fell ill, Laoghaire was convinced of the superiority of Patrick’s God and professed faith in Christ. As was common to that culture, with his conversion, the people of His clan also came to faith. Their alliance with other clans opened the doors for the Gospel.

This then was Patrick’s method of evangelism as he made his way across Ireland. He confronted the Druids head on, showing the superiority of God’s power, breaking their monopoly on the minds of the Irish first, then going after their hearts with the Grace of God in the Gospel of Christ.

Another turning point was the conversion of some of the Druids themselves.

Patrick was driven to bring the Gospel to Ireland because it was considered the end of the World and Jesus had said the Gospel would be preached to the ends of the Earth, then the end would come. Patrick thought he was hastening Christ’s return. In his writings, he repeatedly mentions he was in ‘the last days’, and quoted Matthew 24:14. He wrote, “It has been fulfilled. Behold! We are witnesses to the fact that the Gospel has been preached out to beyond where anyone lives.’

Patrick was less concerned with planting churches as he was in making converts and was tireless in his journeys back and forth across the island. Following the pattern of the time, he considered the ascetic life of the monastery as the purest form of the Faith and encouraged his converts to be monks and nuns. This led to the building of dozens of monasteries and nunneries in Ireland. The rural nature of the island also encourage this form of the Church. Without major urban centers, large churches overseen by bishops were rare.

So Irish Christianity was centered in communal monastic life.

Patrick died of natural causes on March 17th, 493. Today, he’s one of the most famous figures from the 5th C. Like so many others of the past who accomplished great things, we’d probably not even know of him were it not for the dynamic missions outreach that came from Ireland. Patrick, the patron saint of Ireland was British. And the Faith he transplanted across the Irish Sea eventually came back to Britain.

In his book How the Irish Saved Civilization, Thomas Cahill says of Patrick:

“The Irish gave Patrick more than a home—they gave him a role, a meaning to his life. For only this former slave had the right instincts to impart to the Irish a New Story, one that made new sense of all their old stories and brought them a peace they had never known before.”