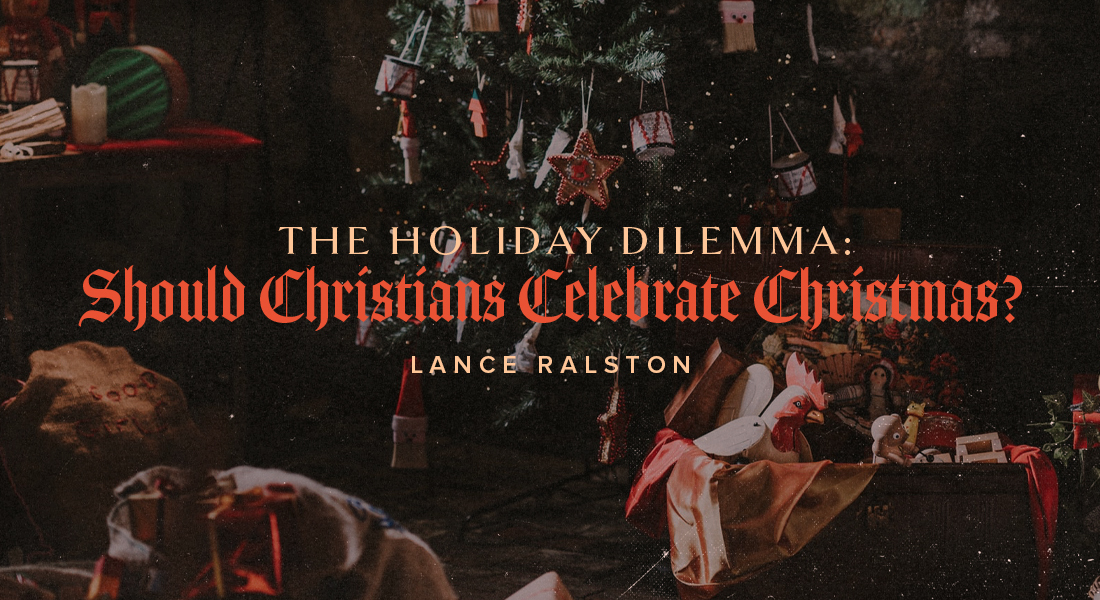 Each year many Christians are faced with the decision of what to do about the holidays. Can they celebrate with everyone else or should they refrain because of the pagan origins of some of the practices associated with this time of year? For some, this is no minor dilemma. What follows is offered in a hope we may find the balance essential to a healthy Christian life.

While the chronology is debated, the best evidence says believers began celebrating Jesus’ birth in the 4th Century. There was uncertainty over the correct date so they picked December 25, a day already being used to celebrate the pagan holiday of Saturnalia. As converts from paganism, they desired to distance themselves from their past. What better way to do that than to turn their love and devotion to the Savior while their neighbors were caught up in the error of their empty faith?

In those early centuries, Christmas commemorated more than Jesus’ first coming as a babe to Bethlehem. It anticipated His Second Coming as King of Creation. Believers looked backward with thanksgiving while looking forward in anticipation. This forward-looking aspect of Christmas is seen in the observance of Advent, a four-week period preceding Christmas when we pause to remember the meaning of the coming of the Savior.1

What poses a difficulty for many Christians today is the realization that many of the rituals of Christmas are a carry-over, not from the Christian traditions of Christmas, but pagan religious holidays. The Christmas tree, exchanging gifts, the Yule log, as well as a host of other practices, come from pagan sources.

The question immediately arises, “If these things are pagan in origin, ought we engage in them?”

Some are convinced they should not. Following the Apostle Paul’s guidance in Romans 14, if one’s conscience is violated, then certainly, they should not observe these things. But let me suggest another way to look at Christmas and its rituals.

The observance of holidays is something God-ordained and commanded in the Old Testament. He instructed Israel to set aside special days as a time of remembrance of the great acts of redemption He’d worked in their history. Each year they were to cease from other activity and remember His great salvation. Passover, Tabernacles, Pentecost, the Day of Atonement; all these point to what God had done, as well as what He had promised yet to do. Celebration on special days commemorating God’s promises was to be a regular and annual part of the life of faith.

One of the commands God gave about these holy days was that when the children asked their parents what the day meant, the parents were to tell the children about God’s mighty grace and how He works in the lives of those who call on Him. At the Passover table, filled as it was with so many strange dishes, it was only natural for children to ask why they ate those particular foods. Parents then explained how each item represented their unique covenant with God. At the celebration of Tabernacles, the entire nation moved outdoors to lean-to shacks made of palm branches. In this way, they commemorated the wilderness wanderings and living in tents. While fun for the kids, it raised their curiosity and provided a teachable moment; a way to ensure the past was not forgotten.

So holidays had a two-fold purpose:

. To regularly remind adults that God works in human affairs.
. To train up the children in the knowledge and heritage of faith in God.

The early church was mainly comprised of converted Jews. As we read the book of Acts, we see that they continued celebrating the holidays of Israel. But now, these special days were infused with new meaning and relevance. Those first Christians could see these special days as not merely a looking back to what God had done but to what God did in giving His only begotten Son, and in what He had promised He would do in the future.

While the Jews have several major feast days, Christians concentrate their attention on two great times of rejoicing: Christmas and Easter. These two holidays are memorials to God’s faithfulness and love. It’s only right we follow on in the tradition of faith by setting aside special days to remember and reflect on the greatness of God and our New Covenant with Him.

The problem is that we find no specific instructions in the Bible on how to celebrate Christmas.

Where such instruction is lacking, we may use sanctified common sense. This means we must avoid sin and walk wisely. We must also consider the dictates of our conscience. But let us each ensure our conscience is informed by truth.

While it is true that most of the rituals of Christmas observed today have their origin in pagan practices, they do not have those associations today. People do not worship their Christmas tree. (Although, they may worship what’s under it!) The dilemma we must address is this: Just what DO the rituals of this season mean? Why do we put a tree in our living room? Why do we decorate it? Why do we give presents, and what is the meaning of the stocking? Who is Santa, and how can he come down that chimney if he has cookies and milk at every house?

While these things don’t have pagan meanings for us, there’s still a problem. The problem is that they have NO meaning. They’re empty of content. Consequently, they’re pointless, vain practices for most. Empty rituals make for a lifeless faith. Jesus was quite hard on the religious leaders of his day precisely on this point. They went through the motions of religion, without any real meaning in their rituals. He didn’t call them to stop their practices but rather to do them with hearts in tune with what they meant (Matthew 23:23).

Rather than cast off the traditions of Christmas, why not re-infuse them with meaning so they become living object lessons of what this season is all about?

When our children were young, this is the way we went about it in our home. On Christmas Eve, we gathered the children around as we sat by the tree and told them the Christmas story. The lights on the tree are a reminder of the stars that lit the field where the shepherds watched their flocks. Then angels appeared to declare the birth of Christ. The star on the top of the tree reminds us of the star that guided the Magi. We tell our children that truly wise people still seek out Christ. The round ornaments remind us that Jesus came because God loves the whole world. The colors of the ornaments: gold, silver, red and such speak of the richness of God’s gift and how Jesus came to shed His blood for our sins. The tree itself is a reminder that Jesus came, not to rule, but to serve and to give His life a ransom for many on the cross of Calvary. (But when He comes again, He comes as King.) The evergreen reminds us that the love and promises of God are everlasting.

We give gifts to one another as a reminder of the greatest of all gifts—Jesus. The stocking which was empty the night before Christmas is filled on Christmas morn, reminding us that when we were empty, Christ filled us with good things. We set out an extra stocking each year. This is Jesus’ stocking. On Christmas morning, before we do any gift opening, we each put a hand into the stocking and pray, offering ourselves to God.

Some people are leery of the whole idea of Santa Claus and as he is presented today, there is a need for concern. But history tells us of a man named Nicholas who was so infused with the love and grace of God he gave hand-made toys to underprivileged children in the name of Jesus. This hero of the faith is worthy of recognition and emulation as we seek to spread the grace of God to those less privileged than ourselves. We can use the symbol of Santa, not as an icon of greed and getting, but as a godly example of grace and giving.

These are some of the ways we’ve infused the real meaning of Christmas into the traditions of the holiday.

If you’re inspired by them, you’re welcome to use them as you wish. Come up with your own as well and share them with your friends so that their experience of Christmas can be enriched.

When it comes to the celebration of Christmas, let these words of the Apostle Paul guide you: “One person esteems one day above another; another esteems every day alike. Let each be fully convinced in his own mind” (Romans 14:5).

1 Dowley, Tim, A Lion Handbook of the History of Christianity Lion: Oxford. 31.