The Legend & Lesson of St. Valentine 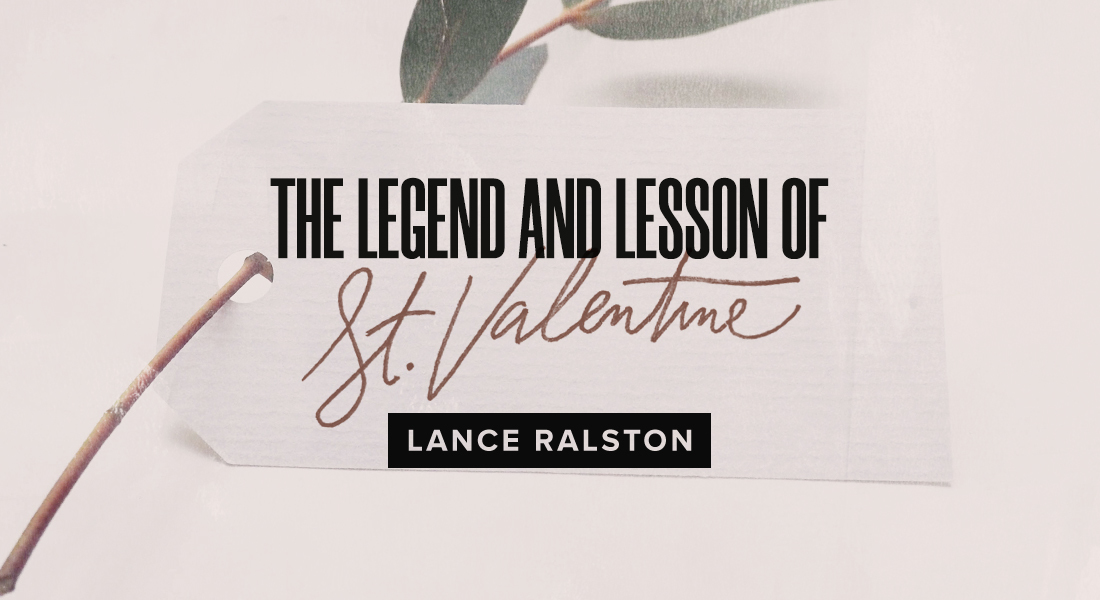 Roses are red. Violets are blue.
Stuff about Valentine,
We wish we knew.

All we can say for sure is that there was indeed a pastor named Valentine who became a martyr around AD 270. Beyond that, it’s legend and conjecture. But where facts are thin, people feel free to provide their own. That seems to be the case with Valentine and the day associated with him.

The legend connected with Valentine casts him as a champion of marriage at a time when it was banned. Though there’s little evidence to support it, it’s claimed the Roman Emperor Claudius needed to boost enrollment in the legions to reinforce Rome’s hegemony in the North and East. When enlistment lagged, Claudius banned marriage, blaming young Italian men’s desire for a wife and family as competition to a military career. Bishop Valentine ignored the ban and agreed to marry couples who came to him secretly.

Discovered and arrested, Valentine appeared before the Emperor himself. Claudius was impressed with Valentine’s courage and learning, and tried to convert him to Paganism. Valentine returned the favor, attempting to convert Claudius to Christianity. That was a little too much for Claudius to bear. Defying the Emperor on principle in support of an ancient and respected tradition like marriage was one thing. Telling him his religion was wrong and that he ought to convert to what Romans considered a novelty was altogether different. Valentine was sentenced to death.

While in prison awaiting execution, so the legend goes, the elderly bishop befriended the jailor’s blind daughter. Though it lasted just a few days, their friendship was genuine and a source of great joy to the daughter. When Valentine prayed for her, her blindness was cured. That led to the conversion of the jailor and his entire household.

The last night in his cell, Valentine composed a letter of encouragement to the daughter, urging her to continue in the faith. He signed it, “Your Valentine.” The next day, February 14, he was led from his cell to the executioner’s block along the Flaminian Way and beheaded. He was buried nearby.

As typical for some martyrs, his tomb became a shrine, the day of his martyrdom became a memorial, Saint Valentine’s Day.

Martyrs were heroes to the Church of the early centuries. When being a Christian was risky, the stalwart faith of those who refused to renounce Christ at peril of death became a comfort to the pressed and an example to aspire to. If their lives, prior to execution, maybe hadn’t been all that exciting, their story was embellished to make it more compelling.

There was indeed a Bishop Valentine executed around AD 270. Why? Well, beyond the fact he was a pastor who refused to renounce Christ, we don’t know. The story of his interview with Claudius and his friendship with the jailor’s daughter may be true. They were attributed to him as early as a couple hundred years after his death.

How Valentine became associated with romantic love seems to date to the late 5th Century when Pope Gelasius co-opted a fading Roman fashion known as Lupercalia, the pagan festival of love which was held near St. Valentine’s Day. Part of the Lupercalia celebrations included young women putting their names in a box. Young men would then draw out a name and the young couple would pair off for a time of amorous attention. The Church rightly frowned on such youthful indulgence and sought to curb Lupercalia’s immorality by replacing it with a more wholesome expression of romantic love via love letters and thoughtful gifts.

Then along came greeting card companies, and the rest is history.

Pope Gelasius’ replacing a pagan festival with a more wholesome celebration was a frequent practice of the post-apostolic Imperial Church. Substituting themes consistent with the Gospel for pagan practices was a way for the Church to communicate with the culture in which it found itself. The idea was, “Why omit these special days people enjoy from the calendar? Their lives are already hard enough. The holidays allow a little joy into an otherwise grinding existence. Why not turn those days instead to communicate the goodness and grace of God?”

Many Christians today are concerned when they discover the pagan origins of some of their annual holidays. They worry about dishonoring God if they observe something that began so far from God. It may help to realize the Church intentionally turned the old days into new days. They saw something like St. Valentine’s Day replacing Lupercalia as the triumph of the Gospel over Paganism, the victory of light over darkness.

In the current social context made fragile by growing tension between men and women, with all the talk about “toxic masculinity” and the #metoo movement, a Biblical view of love and romance is desperately needed. Rather than casting off St. Valentine’s Day as a silly day rooted in immoral paganism, we can use it for the purpose it was first set apart – to cherish the beauty and power of romantic love – realized most perfectly in the Gospel of Jesus Christ.