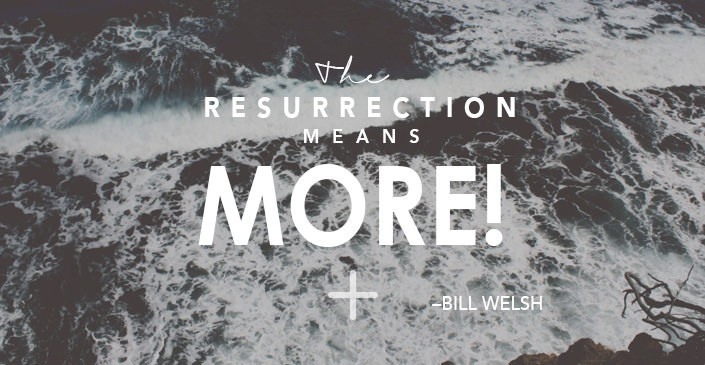 “The thief does not come except to steal, and to kill and to destroy. I have come that they might have life, and that they may have it more abundantly” (John 10:10).

We all want more. Not just more money, more vacations or a few more hours in a day. We want more life.

I’ve stood at the edge of too many graves with grieving families and friends who were forced to say reluctant goodbyes to loved ones whose lives had come to an end. It made no difference if the departed had lived ten decades or ten days. The mourners, or as we call them, “survivors” all wanted more. More time with their spouse, friend, parent, grandparent, child, or in my case, my brother.

They ached for more time to converse, commune, laugh and love. More time to ask those questions that never come to mind until it’s too late, when you realize you never sat down to listen to their story. They would have given anything for just one more moment to give them that one profoundly sincere “thank you for loving me at my worst.” We all wanted just one more day, one more hour, one more kiss. But death came, too suddenly and too soon.

Like an IED (improvised explosive device) planted along our road, the terrorist called death explodes into our lives and leaves us shattered. Like the burglar that cases a neighborhood in a city. This accomplished thief works his way around every block, in what appears to be a random order. Yet we can be sure that he will visit every house as many times as necessary until all residents have been summoned forth and all cities become ghost towns.

Solomon said it like this: “One event happens to the righteous and the wicked; To the good, the clean and the unclean” (Ecc. 9:2). Which event is that, Solomon? Death.

So when we hear Jesus announce that even though the thief has come with his destructive and deadly agenda, He came to counter that attack with one of His own, an agenda of life – abundant life. How abundant? Jesus quantifies His promise.

For us “abundant” refers to that life that overflows with rich and outrageous rejoicing, peace that defies definition, and safe, enriching relationships. This life we look forward to includes the mysterious commodity, “glory” – the element that puts the radiance of God upon our lives.

Then there’s those wonderful words “eternal” and “everlasting” coming from the same Greek word, “aionios,” which carries the idea of agelessness. Brace yourself now. This will never make sense to our earthbound brains. Eternal doesn’t just mean “never ending,” it also implies “never beginning.” We know of nothing and no one in this world that has no beginning and no ending. Everything has a start and a finish, be it a race, a conversation, a day or a song. Jesus died to give us is a life that vanishes beyond the horizon in both directions. Isn’t that the more we have always wanted?

What is the “MORE” we have always wanted?

For the follower of Jesus, there is more, in fact, there was always supposed to be more. God did not design life to be interrupted by death. You and I were not created to die. Allow this rough illustration. In 1954, Leo Fender did not design the Stratocaster guitar to be violently smashed on stage. It was created to make beautiful music. But then along came The Who and guitarist Pete Townsend who delighted in smashing Leo’s guitars to the accompanying screams of fans. That’s exactly what happened in Eden’s garden. What was meant to last for eternity, came violently crashing down as a husband and wife ignored God’s solemn warning.

Though God knew life was fragile and that sin would destroy His masterpiece, He knew of that tragic possibility and soberly warned our father Adam that the day he ate the toxic fruit, death would immediately begin to decimate our world and all that was in it. So death began its rule, yet one day it will finally and permanently be destroyed.

We will live an ageless life of constant abundance, beauty and ever-deepening relationships in an ageless, unending realm. We will never again stand on the edge of a grave or at the darkened door of a tomb and cry out from broken hearts for just a little more life.

I do have great difficulty even imagining a heaven where this no sense of the passing of time. Songs, meals, conversations and games will likely have a beginning and an end. I’m not sure how that will work in a timeless realm. But I’m quite certain, based on Jesus’ words and His perfect sacrifice on the cross and explosive return to life, that at last there will be no end to the goodness and fullness of the abundant life He suffered to give us.
Why? Because the resurrection of Jesus has reset, rebooted and restored life to those who simply, yet sincerely trust in Him.

So, now in Christ you are invited to more. He invites you to the never-ending life of resurrection, glory and unimaginable surprises. No more departures. No more death. No more funerals. No more ghost towns. Just more and more of the life you were created to enjoy in Christ. So come to Jesus, the life-giver. There’s more!