Violence and Peace: A Biblical Perspective on Civil Demonstrations 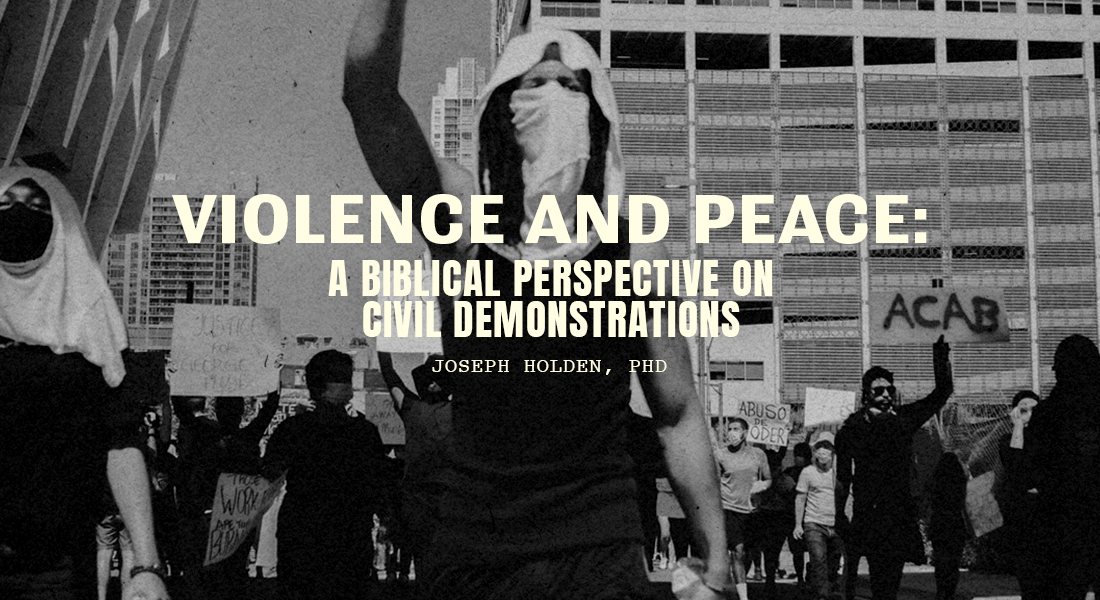 We live in America, in a land where our rights are cherished and valued beyond anything else. They are embedded in our DNA as free people who secured these rights through violent revolution against a European superpower, fought a civil war, engaged in two world wars and witnessed the civil rights movement rise in the 1960s under the leadership of Martin Luther King. After all, our national birth certificate prominently displays the phrase “all men are created equal” and that we are “endowed” by our “Creator with certain unalienable rights, that among these are life, liberty, and the pursuit of happiness.” For many, too much blood, sweat and tears have been invested in securing these rights to allow them to be destroyed. The ability to protest is viewed as a sacred right in the U.S.

Understandably, many protestors are furious with the recent handling of the arrest of a black man at the hands of white police officers in Minneapolis. Such is the case with the recent killing of George Floyd. The ensuing protests, violent riots and destruction of property in protest of government abuse has spread across the country in recent days. This has caused many to consider when, if ever, is it justified to violate the law in civil disobedience, and whether disobedience should ever use violence. For Christians who seek to be obedient to God and His Word, these questions can challenge the best of us in light of the apostle Paul’s statement on the relationship between God, government and its citizenry in Romans 13:1-7.

“Let every person be subject to the governing authorities. For there is no authority except from God, and those that exist have been instituted by God. Therefore whoever resists the authorities resists what God has appointed, and those who resist will incur judgment. For rulers are not a terror to good conduct, but to bad. Would you have no fear of the one who is in authority? Then do what is good, and you will receive his approval. But if you do wrong, be afraid, for he does not bear the sword in vain. For he is the servant of God, an avenger who carries out God’s wrath on the wrongdoer. Therefore one must be in subjection, not only to avoid God’s wrath but also for the sake of conscience” (Romans 13:1-5).

Despite this passage, many Christians are deeply patriotic and yet recognize that our country was founded on violent rebellion to established laws! We also understand that government was established by God for the good of the people and to resist government would be tantamount to resisting God Himself. So, when is it justified to disobey government, and should it be violent or non-violent?

Though the question posed above can be a thorny one to navigate, especially with so many differing perspectives and emotions on the matter, the Scriptures and common sense give us guidance.

The anarchist position may be attractive to some young people seeking to remove the bonds of government accountability and promote change through violence against those with whom they disagree. But upon a closer look, this view appears self-defeating and unsustainable on the “might makes right” mentality. Obviously, Nazi Germany was arguably the most powerful nation in the world by 1939, yet its Final Solution policy of genocide cannot be condoned as virtuous by any society, whether anarchist or otherwise. It is not difficult, especially in light of Romans 13, to see why Christians reject anarchy as a plausible approach to civil disobedience.

Radical patriotism, which claims we ought to obey government right or wrong, may be a more popular position among the Christian community due to Paul’s strong language in Romans 13 and our founding fathers’ statements concerning God and government.

“No people can be bound to acknowledge and adore the Invisible Hand [of God] which conducts the affairs of men more than those of the United States. Every step by which they have advanced to the character of an independent nation seems to have been distinguished by some token of providential agency” (First Inaugural Address, 1789).

“Providence [God] has given to our people the choice of their rulers, and it is the duty as well as the privilege and interest of our Christian nation to select and prefer Christians for their rulers” (President of Continental Congress, 1778-1779).

Many Christians see America as a “Christian nation” from its founding, which means to them that God and government are nearly synonymous, prompting unflinching obedience to obey government as we would obey God. However, this viewpoint has several problems.

First, many passages describe God’s people as approvingly disobeying government officials and policy. Daniel’s three friends, while in Babylonian captivity, disobeyed the government command to worship Nebuchadnezzar’s image (Daniel 3:1-30). In addition, Peter and John refused to obey the command by the Sanhedrin to stop preaching in public (Acts 4:13-22).

Second, despite the fact there were many fine Christians involved in founding our country, it would not be accurate to characterize America as an official “Christian nation.” Though the Declaration of Independence appeals to God and His providence, it would be more accurately posited that America was founded on Judeo-Christian principles and the concept of natural law ethics in the tradition of Thomas Jefferson, John Locke and William Blackstone (cf. Romans 2:15).

Third, the founders did not want another religious government, they just left this type of rule in England. They correctly recognized that civil society ought to be governed by natural law and common sense, not religious dogma. For natural law was given to all men by God (Romans 2:15), while scriptural revelation was given to God’s people to govern the church. It simply would be inappropriate and perhaps immoral, much like forced Islamic law, to impose religious doctrine upon an unbelieving public. In their genius, the fathers utilized man’s innate understanding of right and wrong (natural law) as the basis to form public policy, all of which is consistent with Scripture. An example of its implementation is found in the Nuremberg trials following WWII as international prosecutors used the charge of “crimes against humanity” to convict captured high ranking Nazis for war crimes.

The remaining option, biblical submissionism (sometimes is right to disobey government), appears to offer Christians two approaches to disobey government – either antipromulgationist or the anticompulsionist positions. The former supports disobedience when the government promulgates laws that are incompatible with Bible doctrine. According to this view, in the event of immoral public policy, the government is seen as abdicating its God-given authority and the immoral policy should be viewed as null and void. Meaning that antipromulgationists view American government as a De Jura institution, directly linking governmental authority to the consistency of policy with Bible doctrine. Thus, breaking the law is justified in order to change unbiblical laws or to preserve a greater good. According to this was of thinking, trespassing or vandalism is acceptable when protesting an abortion clinic. This view is articulated in Samuel Rutherford’s Lex Rex: The Law is King (1644) and adopted in recent times by Francis Schaeffer in his Christian Manifesto (1980).

Unlike the former, the anticompulsionist justifies civil disobedience only when the government compels (mandates) its citizens to do what is immoral. In other words, anticompulsionists don’t believe Christians have the right to disobey when government simply permits immoral behavior through its laws (e.g. abortion), but only when citizens are commanded to obey immoral laws (e.g. mandating abortion vs. permitting abortions).

It appears that the first option (anarchy) supporting civil disobedience does not have biblical support and lacks common sense to operate a functioning society. Even the anarchist must be governed by its own laws or rules, which makes it self-defeating in its hard form. Radical Patriotism supports blind obedience to governmental authorities, which history shows can be dangerous (e.g. Nazi fascism). It also appears to contradict biblical examples of approved disobedience. But does the Biblical submission position have biblical support?

There are at least eight cases of civil disobedience in Scripture that are explicitly or implicitly approved by God.

to disclose the location of Israelite spies.

in the name of Jesus.

those who obey will be lost.

In each of these cases, there was a command by authorities to do evil; an act of disobedience to that command; an implicit or explicit approval by God; the disobedience was non-violent; some fled and others accepted the authorities’ punishment. These examples give Christians precedence on how to respond to oppressive governments.

First, obey the laws of the land, even if they permit evil (abortion). Work within the law to change these permissive immoral laws.

Second, it is acceptable to disobey the government’s immoral laws if they command Christians to do evil. God’s law is higher than earthly governments, so when the two come into conflict, choose the higher law. Essentially, you are choosing the greater good.

Third, patiently endure suffering and expect prosecution if you disobey. Be ready to accept the punishment.

Fourth, civil disobedience should be non-violent. God gave authority to the government to use arms to punish unruly citizens and to protect its citizens from hostile foreign governments (war). Unlike government authority, God did not authorize the people to take up arms against the government personnel. There are other non-violent means to actively and passively resist oppressive government, such as protest, legislation, publishing, fleeing and hiding. Non-violent civil disobedience brings up an apparent conundrum for those Christians who patriotically wave the flag each fourth of July in celebration of our country’s founding, in spite of the violent rebellion against Britain to achieve nationhood. However, one can simply enjoy the end result and still reject the means by which it arrived, much like a baby born from rape. We can be a patriotic American and celebrate the “baby” without endorsing the way in which the country was conceived. Granted, national change may take longer without violence, but Canada, through patience and negotiation, finally received independence from European powers without a revolution.

For the Christian, justified civil disobedience requires government to issue a command to do evil. In such cases, the believer has not only a right but a duty to disobey. The violent riots in the name of George Floyd do not meet these criteria. Though government forces were involved in the unjust and tragic death of Floyd, they are not commanding the public or its officers to do the same to others. Namely, the officer’s arrest tactics were an aberration of normal protocol in such instances, not the fulfillment of mandated procedure. Rather, they are punishing the officers involved in the tragedy. Peaceful protest within the confines of the law is acceptable, but violence is not. Ultimately, proper civil disobedience begins with submission to God’s Word and recognizing the government’s God-given authority. This way we can properly honor the memory of George Floyd and begin the discussion of how to improve public policy, administration and enforcement.