Why Complaining is Self-Inflicting 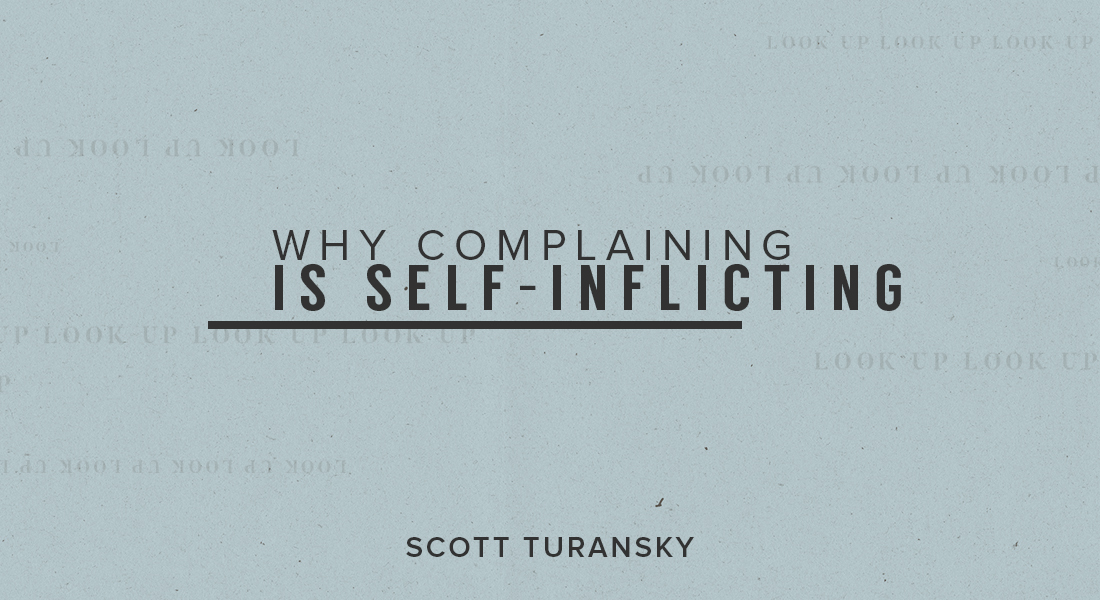 God hates complaining! Why? Because the person who complains is focused on earthly things instead of on spiritual things. At least, that’s what God was trying to teach the Israelites during their wilderness wanderings.

In Numbers 21 the people grumbled about the leadership, the slow speed of progress and the food. Isn’t that interesting—the same things people often complain about today! We don’t like to wait. The people in charge could always do better, and then there’s always something negative to say about the food.

I teach parents how to help their children thrive. One of the challenges children sometimes face is complaining. I like to tell them that complaining focuses on the problem. It’s earthly. In fact, Philippians 2:14 links complaining and arguing to a worldly generation. People who are worldly complain. It’s because they have their heads down. They are consumed with earthly things.

Verse 15 though shows the contrast and teaches one of the principles that helps us flourish in life. In contrast to complainers, Paul says, “Then you will shine among them like stars in the sky as you hold firmly to the word of life.”

One of ways that you can test your daily spirituality is to measure your complaining index.

If you’re focusing on earthly things, then it’s time to look up. Be like a star that shines in the sky. When the Israelites complained, God sent poisonous snakes that actually increased their pain. And when they cried out to Moses to ask God for help, God had him build a bronze snake and put it on a pole. People would have to look up for healing.

The same is true today. People who complain often end up with more pain, much of it self-inflicted, and the solution is to look up to God’s solution.

He provides answers to the daily challenges we face. He wants us looking up to His grace and mercy. Those who look up see things differently. They experience God in ways that others don’t.

I’m sure there were some Israelites who didn’t look up, and many of them died. “I don’t believe in the snake. It can’t help me. My problems are too bad.” It’s a choice that we each make. It’s a matter of focus. In fact, it’s a way of life.

Jesus tried to explain this same principle to Nicodemus in John 3, but Nick had a hard time catching the idea of the physical vs. the spiritual. Jesus described it as being born again, an entrance into a new life that changes a person’s viewpoint.

Jesus said, “I have spoken to you of earthly things, and you do not believe; how then will you believe if I speak of heavenly things?” Nicodemus was stuck on the earthly. He needed to get his eyes on the heavenly. God wanted to do something significant in his life. He wanted to breathe into him the Spirit of God.

So, to help Nicodemus get the picture, Jesus talks about the Israelites and the snakes. He says, “Just as Moses lifted up the snake in the wilderness, so the Son of Man must be lifted up, that everyone who believes may have eternal life in him.” Certainly Nicodemus knew that story. After all, he was a Pharisee. He was trained in the Old Testament. And Jesus wanted to remind this teacher of the law that he needed to make a personal choice in his own life to look up and choose God’s solution.

Unfortunately, our world is full of complainers.

You listen to people on their phones complaining about other people, the weather or how they were treated. You hear business people complain about flights, bosses and competitors. Even in families, you hear children and parents complain about decisions, choices and all kinds of life situations.

If complaining is so bad, why is it so common? It’s because people have a tendency to contemplate temporal things. There’s a whole different way to think. It starts with salvation, looking up to the cross. And then it means continually appreciating God’s grace, being thankful for what we have and choosing to express that gratefulness in encouraging ways around us.

God wants us to shine like stars in the sky, and one of the ways we can do that is to encourage others and avoid complaining. In a world where negativity reigns, we stand out. We’re different. We’re Christians who, by the very name, have our eyes and hearts focused in a heavenly direction.