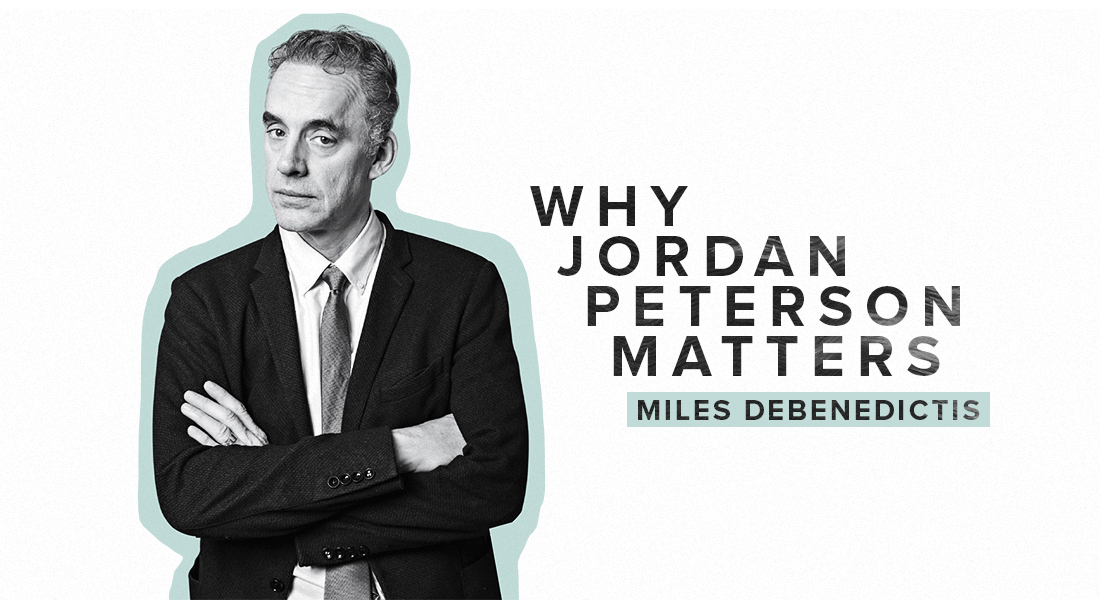 I have watched, somewhat in awe, over the last couple of years the rise of Jordan Peterson on YouTube, through podcasts and other media formats (books, blogs, etc.). I haven’t always been sure how to classify him or categorize his ascent. He’s not a Christian, at least not in an orthodox sense. Though I’ve heard him self-identify as a Christian, he would make a distinction. He would probably call me, and others like me, a “fundamentalist.” In some respect, that’s not far off, though every time I’ve heard him use the term, it seems to be dismissively, if not pejoratively.

Peterson is a celebrity by accident. He did not aspire to notoriety, but he’s certainly achieved it in the last year. He currently has over 700,000 Twitter followers and 1.2 million YouTube subscribers. His most recent book, Twelve Rules For Life, has been an Amazon bestseller since it’s release in January (it’s currently number two after nearly six months). As I write, Peterson is speaking nightly, nationwide, to sold-out crowds, on what is an extended book tour. Tickets cost as much as $600 apiece. Also, he’s pulling in an estimated $80,000+ a month from Patreon supporters. The once clinical psychologist, a professor at the University of Toronto, has no reason to ever return to the classroom or his clinical practice.

As I said previously, I’ve been intrigued since I first heard of him. I began following him when he first rose above the radar over a controversial Canadian legislative bill in the fall of 2016. He has a lot to say, and much of it reverberates with Judeo/Christian tones. Which is precisely why Christians should take notice. In watching and listening to him, several things come to mind. Five of which beg more in-depth consideration.

Long-Form Monologue is Not Dead

For as long as I’ve been preaching (20 years next year), voices in our culture have been saying that preaching, especially long-form monologue, is dead. Those promulgating this perspective have told us that the collective attention span in the West has devolved. Americans, raised on 30-second ad spots and 22-minute television programs cannot handle more than 25-30 minutes of preaching, they say. Many of the same voices tell us that dialogue is essential for the 21st century westerner. “You cannot give a message from a platform; it needs to be a conversation in a circle.” Peterson proves that’s not true.

In the summer and fall of last year (2017), Peterson gave a series of 15 lectures, in the Book of Genesis, on the “psychological significance of the Bible.” He “preached” more than two and a half hours each time, to some 500 listeners, all of whom paid admission to come. He’s since promised that he will pick the series up again in the future with the Book of Exodus. If that happens, I’m certain of three things. First, he’ll need a larger venue. The 500 seat theater was already too small a year ago. His following has only increased. And the live audience pales in comparison to the millions of views the recorded lectures have received on Youtube. Second, he’ll charge a lot more for admission. By his admission, he’s an “evil capitalist.” Simple supply and demand will require much higher costs of entry. Third, his messages will not get shorter. Peterson loves to talk, and he’s found an audience of people who are longing to listen. In this he’s proved long-form monologue preaching is not dead

Another cultural lie we’ve been told for the last 20 years: “The Bible has no place in our [post]modern society. We’ve advanced beyond its archaic ideas, views and teachings.” Really? Not only is that not true, it’s not true by a large factor.

Just this week (June 12, to be exact), Peterson’s first book, Maps of Meaning, came out in audiobook format. It’s more than 30 hours of audio, read, of course, by the author. It’s an instant bestseller. In print, it’s 564 pages. Much of it goes back to Scripture, and it’s significance. I guarantee that most of the consumers of this audiobook are males, ages 20-40.

Now, it should be noted that Jordan Peterson’s interpretive lens for Scripture is not something with which any preacher I know would be comfortable. He approaches the Scriptures from a purely allegorical and mythological angle. He does not believe in the inerrancy of Scripture. He does not use a historical, grammatical, interpretative method. As far as I can tell, he does not take the Scriptures literally, and he questions much of its history too. He is not an evangelical Christian. He is a Christian only so far as he sees value in the Christian ethic and the mythological narrative of the Bible. But, he’s gathered a large following of predominantly educated, millennial, male westerners. The very segment that Christians both need to reach and have had a hard time reaching over the last two decades. And the fact that he’s gained a devoted audience with this demographic leads to my final three considerations.

God is Not Dead in Academia

Peterson’s rise informs us that the need for classically trained, academically minded Christians is greater than ever. This isn’t a new observation. Groups like Francis Schaeffer’s L’abri, more than 40 years ago saw this with prescient clarity. Ravi Zacharias’ International Ministries has sought to address it for more than 20 years. Christians in the 21st century western world need to think and speak the academically oriented language of higher education, and they need to enter academia as missionaries.

Many in science, technology, engineering and math (STEM) fields are atheistic, or at the very least agnostic. The arts and humanities are almost worse. But that does not mean that God is dead among academics or in great academic institutions of the West. There are strong holdouts with well-reasoned Christian faith in the academy. But we need many more Christians to step into the academic sphere and “contend earnestly for the faith.”

It has been said that “the philosophy of the classroom in one generation will be the philosophy of government in the next.” I think that’s true, and being that it is, Christians cannot vacate the academic domain. Especially when you consider, that many of the great universities of the West, were originally founded by individuals with a strong Christian faith.

In seeing this reality, I am more than a little discouraged by my own experience. Twenty years ago this week, I graduated from high school. And when I did, I didn’t enroll in college or university, partly because of the discouraging tone of Christian leaders I esteemed. More than a few of the Christians who influenced my decisions at that time exhibited a suspicion and distrust of higher education. I know now that was not a helpful attitude. Be that as it may, as the Church moves further into the 21st century, we must realize that we need to adjust, as our culture has changed.

The apostle Peter said, “Sanctify Christ as Lord in your hearts, always being ready to make a defense to everyone who asks you to give an account for the hope that is in you.” This we are to do in meekness and with respect. The concept of an apologetic arises almost solely from this verse. The word translated “defense” in many English translations of 1 Peter 3:15, is the Greek word apologia. It could also be translated “give an answer.” Christians have been doing this effectively for 2,000 years. But the answers are always in response to the changing questions of culture.

The questions of culture change continuously from generation to generation. Every worldview endeavors to answer these questions coherently. The far-reaching growth of the Christian faith from the first to the 21st century proves, I believe, that it’s answers are the most compelling. That is a truth that will not change, even if the pressing questions of culture do. And though the specifics of those questions vary, at the level of abstraction, the most important issues of meaning and value all fall under five essential headings: origin, identity, purpose, morality and destiny.

After listening to his lectures, watching his interviews and reading his books, I think Peterson is seeking to address these issues apologetically. And it is fascinating to see that, like many Evangelical Christians, he does so with something of apocalyptic fervor. He is passionate about his convictions and exacting with his words. I’m convinced that many are attracted to Peterson precisely because of his well-reasoned, authentic and genuine message, which seems to explode from a grave concern that our culture is fast descending into an abyss. Like an Old Testament prophet, Jordan Peterson is sounding an alarm in the West. He sees an unseen force of gravity, pulling our culture past the event horizon, into an inescapable black hole. And though he has met stiff opposition, he does not seem to be backing down. Which shows, finally…

Strong Warnings and Stern Exhortations Are Not Unacceptable

In our über-tolerant culture, some things are not tolerated. Peterson’s emphatic warnings and clarion appeals are definitely on the blacklist. The applications of Peterson’s message are hyper-individualistic (he despises collectivism) and gut-checkingly challenging. There is no wishy-washiness in his exhortations. He is dogmatic in every sense of the word. That too is not tolerated by many in the West. You might expect this would be a turnoff for his mostly millennial followers. And yet his appeal only seems to be growing.

Since the rise of the seeker movement of the 1980s, Christian leaders have promoted a softer, life-coach spirituality. “Don’t call people out. Address the collective ‘you plural.’ Focus on felt needs. Don’t be direct. Be encouraging.” In many ways, modern American Christianity fits perfectly in the $10 billion a year self-improvement industry, right next to Tony Robbins, Deepak Chopra, Oprah Winfrey and even Jordan Peterson.

His book, Twelve Rules For Life, exists among other self-improvement titles, but it’s set apart by it’s bold and confrontational tone. “Stand up straight with your shoulders back.” “Set your house in perfect order before you criticize the world.” “Tell the truth—or, at least don’t lie.” He’s mocked by his critics for calling on people to clean their room. But when he says, “If you can’t even clean up your own room, who the hell are you to give advice to the world?” you can hear the echoes of Jesus, “First remove the plank from your own eye, and then you will see clearly to remove the speck from your brother’s.” Or Paul, “If we would judge ourselves, we would not be judged.”

Among all the nuanced and subjective shades of grey that are 21st century western culture, the objective contrast of white on black is refreshing. And though I in no way want to make Messianic allusions, Jordan Peterson’s rise is a reminder that when Jesus had ended the sayings of the Sermon on the Mount, “…the people were astonished at His teaching, for He taught them as one having authority, and not as the scribes.”

Above photo of Jordan Peterson credited to Time Magazine 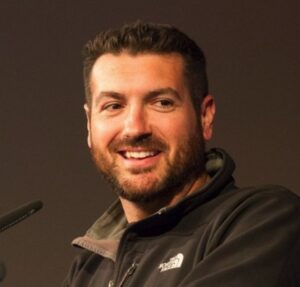