Why the Virgin Birth is Essential to Christianity 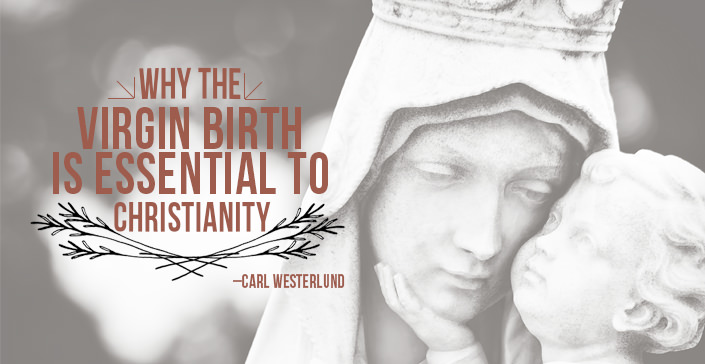 Mary spoke these words, perplexed by the news the angel gave her, “How can this be, since I do not know not a man?”

People have uttered these words throughout history. “How can this be?” That is why the doctrine of the virgin birth is integral to the Christian faith. Men need to know that this is true. Jesus was a great man with god-like characteristics. He could do marvelous works: He could heal the sick. He could control the weather. He could even bring the dead back to life. But Scripture says He was more than a great man – Jesus Christ was Immanuel – God with us. In order for Him to be God incarnate, Jesus would have had to have a supernatural birth.

One reason why the virgin birth is important is that it provides the basis for the doctrine of the deity of Jesus Christ. The ordinary procreative process brings about the beginning of a new personality. If Jesus did not have a virgin birth His birth would be purely human, He would not be God. But Jesus did not get His personality through birth. The conception of Jesus occurred through a work of the Holy Spirit. In response to Mary’s question, “How will this be, since I am a virgin?” (Luke 1:34 ESV), Gabriel declares, “The Holy Spirit will come upon you, and the power of the Most High will overshadow you; therefore the child to be born will be called holy—the Son of God” (Luke 1:35 ESV). The angel encourages Joseph to not fear marrying his betrothed: “that which is conceived in her is from the Holy Spirit” (Matthew 1:20 ESV). Matthew declares that the virgin “was found to be with child from the Holy Spirit” (Matthew 1:18 ESV).

These Scriptures indicate that Mary was chosen and the Holy Spirit in a unique way created the miracle of the birth of Christ. Mary provided the human side, while the Holy Spirit in some way provided the divine side. Jesus Christ did not begin with His earthly birth. His divine side existed from all eternity. In John 1:1 we read, “In the beginning was the Word, and the Word was with God, and the Word was God.” At the beginning of time, Jesus was already there. Paul adds that he had the form of God but chose to come in the likeness of men (Philippians 2:6,7). Unlike all other men, Jesus Christ had an eternal preexistence. If His conception had been like that of all other people, no provision would have been made for Him to be God, as well as man. The virgin birth was the means whereby the divine nature could be wedded to the human nature so that truly Jesus Christ could be the God-man.

Another reason why the virgin birth is essential to Christianity is that it made it possible for the Christ to be the sinless Savior. If Christ had a normal purely human birth, then he would have been a natural-born sinner like all the others and deserving of the condemnation of God. All other men are under the condemnation of death. One of the most important theological verses of the Scripture is Romans 5:12. It states “Therefore, just as through one man sin entered the world, and death through sin, and thus death spread to all men, because all sinned”. Jesus Christ comes in contrast to the one man, Adam, who provided the genetic fatherhood that caused all men to be sinners. The Christ had a divine side that enabled Him to identify with man, but to yet be totally separate from men.

The law did not have power to save men from the death penalty. Only one who was fully God, and had a unique conception that set Him apart from all other men could do what was needed to rescue men from sin. Romans 8:3 says, “For what the law could not do in that it was weak through the flesh, God did by sending His own Son in the likeness of sinful flesh, on account of sin: He condemned sin in the flesh,” He was like men. He looked like a man, talked like a man, had the feelings of a man. But He was different. Sin was not in any way a part of His life. He did not sin. Jesus had a human nature, but it was a human nature that was impacted by his deity, making him the sinless One. If He had sin in Him, He would have to have His sins atoned for in some way and could never be the sinner’s substitute.

Finally, the third reason the virgin birth is essential is that the very trustworthiness of the Bible depends upon it. The Gospel writers believed that Jesus Christ was born of a virgin. Matthew writes that Joseph had a dream where an angel said to him, “the virgin shall be with child and bear a Son” (Matt. 1:23). Luke says that the angel Gabriel encountered “a virgin betrothed to a man whose name was Joseph and her name was Mary. He announced to her that she would have a son. She responded, “How can this be, since I do not know a man?” She was amazed that she could be pregnant when she was still a virgin.

So both Matthew and Luke treat the virgin birth of Jesus as fact. Could it be that these writers had fallen victims to deceit? Perhaps Joseph lied when he told about his dream that an angel had spoken to him. Had Mary also lied in her report? Or it could be that the writers themselves were deliberately lying? If the account did not occur exactly as stated, it is not to be trusted. If we cannot trust what Matthew and Luke wrote, the Scriptures, the foundation on which we rest our faith, is undermined.

No other person ever lived on earth like Him. His unique birth was evidence that He was truly God in human form. Jesus had a fully divine nature that made it possible for Him to be our Savior. To save sinners was His mission in coming to earth. Through His birth we maintain the integrity of the Scriptures, because they declare Him to be virgin-born. The virgin birth is essential to our faith.