From Hanukkah to Christmas – The Light that Overcomes Part 2 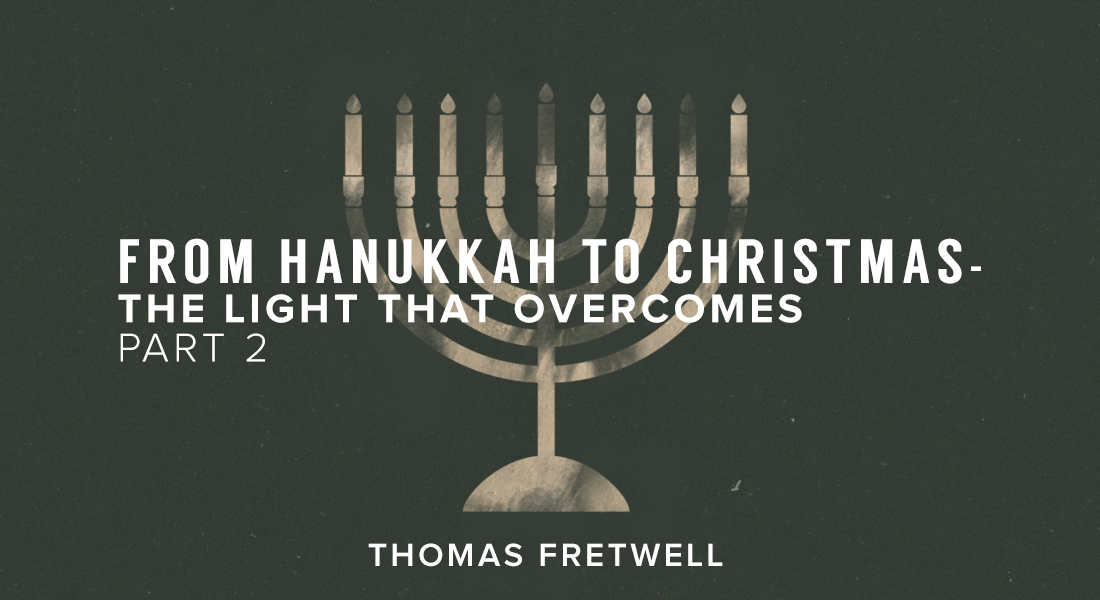 In part one of this series, we looked at the historical background that led to the feast of Hanukkah. A tumultuous period in Jewish history that climaxed with the Maccabean rebellion, rededication of the Temple, lighting of the Menorah, and ultimately, Jewish independence from a tyrannical ruler who sought their destruction.

Although Hanukkah is not a biblically mandated feast in the Torah, and considered only a minor holiday in Israel today, there is much more to this holiday than candles and delicious doughnuts.1

Although keeping the feast is never commanded, the events at the center of the feast are prophesied in the Bible. In the book of Daniel, there are prophecies about the reign of Antiochus Epiphanes. It says that, “Forces from him shall appear and profane the temple and fortress, and shall take away the regular burnt offering. And they shall set up the abomination that makes desolate” (Daniel 11:31). The abomination refers to the statue of Zeus that Antiochus had installed in the Holy Place. Elsewhere the prophet Daniel specifically mentions the time when the Temple will be rededicated – the events remembered at Hanukkah: “For 2,300 evenings and mornings. Then the sanctuary shall be restored to its rightful state” (Daniel 8:14). Far from being a curiosity of Jewish history, the Lord Jesus referenced these events in order to warn his disciples that history will once again repeat itself in the last days. He told them that if they should see “the abomination of desolation spoken of by the prophet Daniel, standing in the holy place” (Matthew 24:15) they should flee Jerusalem.

In the Gospel of John, we see the life of Christ organized theologically around the feasts of Israel. It was during the final days of the feast of Sukkot (Tabernacles) that Jesus entered the Temple courtyards and first proclaimed, “I am the light of the word” (John 8:12). Such a declaration would have had enormous impact, as during this time, there was a lamp-lighting ceremony in the courtyards where four 75 foot menorahs were lit at night. Josephus records that the light from the menorahs was so bright that it lit up all of Jerusalem. Shortly after this, John’s Gospel records Jesus again entering the Temple, this time at another celebration of light, the feast of Hanukkah (dedication) (John 10:22-42). In the pursuing dialogue with the Jews, he makes the remarkable statement that, “I and the father are one” (John 10:30). Most likely a reference to the Shema – “Hear O Israel, the Lord our God, the Lord is One” (Deuteronomy 6:4) and an implicit proclamation of His deity. Interestingly, this was also said to be the battle cry of the Maccabees when they attacked the enemies ranks.

During this season, Jesus presented Himself as the One true God who is the Light of the world. This is all the more relevant for Christians as we celebrate the incarnation during the advent season. The prologue of John’s gospel describes the mystery of God’s incarnation using the motif of light: “In him was life, and the life was the light of men. The light shines in the darkness, and the darkness has not overcome it” (John 1:4-5). Jesus is also described as “the true light, which gives light to every man” (John 1:9).

Glory for Israel and a Light for the Gentiles

During the eight days of Hanukkah, it is customary to light a nine-branched Hanukkiah (candelabra) from right to left. The candles must be lit using the center candle which is designated as the “servant” candle. It is easy to see the spiritual significance attributed to this act by those who follow Jesus. The servant candle gives light to all the others. These Hanukkah lights point us to the Light of the World who was Himself a servant according to the prophecy of Isaiah 52:13-53:12. Jesus said that the Son of Man “came not to be served but to serve, and to give His life as a ransom for many” (Matthew 20:28). In the New Testament nativity narrative, the Messiah is called “a light for revelation to the Gentiles, and for glory to your people Israel” (Luke 2:32).

The prophet Isaiah, who predicted Messiah’s redemptive work, first spoke of this when he said, “The people who walked in darkness have seen a great light; those who dwelt in a land of deep darkness on them light has shone” (Isaiah 9:2). Here we again see how this messianic imagery of light connects with Christmas, as a few verses down in the same chapter, we have one of the most common scriptures used at Christmas that speaks of a child being born who will be the one to fulfill Isaiah’s prophecy and lead men out of darkness into light: “For to us a child is born, to us a son is given…and his name shall be called, Wonderful Counselor, Mighty God, Everlasting Father, Prince of Peace” (Isaiah 9:6). He will be none other than the Word made Flesh (John 1:14) who gives light to every man.

So, this season let us remember that God is faithful to His promise to preserve His people; He is the true Light of the World, and it is through Him that all people have the light of life (John 8:12). May we shine this light brightly during the dark winter months. Jewish Christian scholar Alfred Edersheim exhorts us with these words:

“But to us all, whatever our special views or conclusions may be, Christ is the true Temple, and His Incarnation the real Dedication of the Temple. God grant that from our homes the true Light of Christ, ‘a light to lighten the Gentiles,’ may shine forth into the wintery darkness of the heathen world, and also ‘so shine before men, that they may see our good works, and glorify our Father which is in heaven.’”2

1 It is customary to eat sufganiot (deep-fried jam doughnuts) at this time.