How Firm a Foundation: The Life of Adoniram Judson 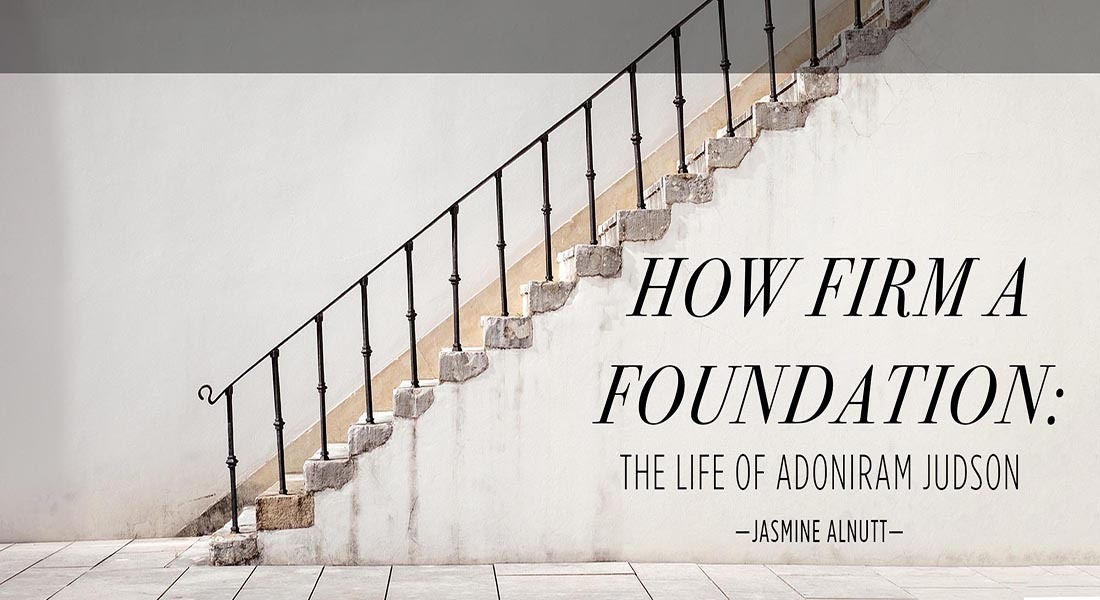 “God is to me the great Unknown. I believe in Him, but I find Him not.” This is not something you would expect a strong Christian to say, let alone someone serving in ministry! Yet what if I told you that not only was this written by a godly Christian, but by the man considered the “Father of American Missions”—and not in his early days, but after he had been serving on the mission field for about 15 years?

As Christians we often unwittingly believe that as we mature in our relationship with the Lord, we will grow in our ability to rebound from and overcome trials to the point where they don’t even bother us that much. Yet if that were the case, how would we explain the recurring distress of David in the Psalms? The great “man after God’s own heart” exclaimed, “How long, O LORD? Will You forget me forever? How long will You hide Your face from me?” (Psalm 13:1, NKJV). How would we explain the agony of Jesus Himself, as He cried from the cross, “My God, My God, why have You forsaken Me?” (Matthew 27:46, NKJV).

Clearly while we do grow and mature as we draw near to the Lord, we may still experience a “dark night of the soul.”

This was the case with the great Adoniram Judson. Adoniram was raised in a Christian home in Massachusetts, but when he was in college, he was swept up by the intellectual fervor of the Enlightenment. He came to view Christianity as a religion of ignorance for weak-minded, superstitious people, not truly intelligent and sophisticated scholars. Because Adoniram prided himself on his brilliance and intellect, he walked away from the Lord.

However, once he graduated and went out into the great, wide world, he realized that nothing he pursued satisfied him; his lofty goals and dreams soon gave way to aimlessness and frustration. He began to experience a series of “wake-up calls,” culminating in the death of his closest friend, a Deist intellectual. At last, the Lord was getting this dynamic, stubborn young man’s attention, and he enrolled as a student at Andover Seminary.

When Adoniram finally committed his life to the Lord, it was a complete and utter surrender.

He desired to do something radical and unique for the Lord, and becoming America’s first missionary certainly fit the bill! Shortly after this, he read about the country of Burma, which so captured his heart that he decided he must go there.

At this time a vivacious, intelligent young woman named Ann Hasseltine also captured his heart. He fell madly in love with her, and a month after their acquaintance, he asked her dad for her hand in marriage. Although Adoniram made Mr. Hasseltine aware of the dangers and risks of missionary life, he consented; perhaps even more surprising is the fact that Ann did too! They were married in February 1812, and within two weeks, they sailed for Burma.

The Judsons faced incredible challenges and hardships in their early years in Burma: difficulty learning a complex language with no sentence structure, punctuation, or word separation; difficulty evangelizing a people with such low views of deity; constant scrutiny from a volatile government; no correspondence from home for the first three years; five years before the salvation of their first convert; and the deaths of all of their children in infancy.

Yet God gave them remarkable grace and endurance.

He blessed their ministry and it slowly began to grow. A small Burmese church was established with solid, faithful believers; in time, Adoniram felt he could confidently leave the church in Rangoon and move further inland. When the Judsons were invited to come live near the Royal Court in Ava, it seemed to be a wide open door to share the Gospel among Burma’s government leaders.

However, the political climate quickly changed due to impending war with England, and Adoniram found himself arrested and thrown in death prison on suspicion of conspiracy with the British! These were dire straits indeed; not only was the prison filthy, dark and rat-infested, but at night the prisoners were hung by the feet to a pole, so that only their head and shoulders touched the ground. At one point Judson and the other inmates were transferred to another prison and were forced to walk barefoot for 8 miles through the jungle. It was such a horrific journey for the weak, malnourished men that several died along the way; Judson himself even contemplated suicide.

Meanwhile, Ann was an amazing support to her husband. She constantly mediated on his behalf and smuggled food and other items to him. She even took the precaution of hiding his precious Burmese Bible translation when the authorities confiscated their house. Ann also gave birth to a baby girl during Adoniram’s imprisonment, but that didn’t stop her from following him from one prison to another. At one point she spent several months living in a storage room so she could stay near her husband. She contracted smallpox, spinal meningitis, and dysentery, to the point where she couldn’t feed the baby and Adoniram had to be released from prison to find other mothers in the village to nurse her! Miraculously, the little family survived, and Adoniram was released in 1825, but Ann and the baby only lasted a short while before passing away the following year.

Adoniram was devastated by the loss of his beloved Ann. Initially, he responded by becoming a workaholic, but as time went on, his production dropped off. He blamed himself for her death and attempted to destroy any vestige of pride or self in his life. He even made his family in America vow to destroy all of his letters and writings!

Adoniram began to avoid contact with others, and two years after Ann’s death, he went into the jungle to live in a hut as a recluse. He even dug himself a grave and meditated on death for hours on end.

It was at this point that he admitted, “God is to me the Great Unknown. I believe in Him, but I find Him not.” Certainly this was the darkest night of Adoniram’s soul. Could the God who seemed so distant and unknown truly be the “ever present help in time of trouble” that Scripture claimed Him to be, and that Adoniram so desperately needed?

Biographer Ruth Tucker gives us the answer: “There were no psychiatrists, there was no psychoanalysis, and there was no group therapy. There was, however, a tremendous outpouring of love and prayer by both his colleagues and by the native converts. But more important, there was a solid foundation to his faith that was able to endure even the most trying times of doubt.”¹ Because Adoniram’s foundation was sourced in Someone bigger than any circumstance or emotion, any trial or devastating loss, Someone bigger even than himself, he found that no matter how deep he sank into despair, no matter how far he drifted, that Someone was still ever present and would never let him go. This is truly one of the most powerful and wonderful things about our God—that when we can’t hold onto Him, He is holding onto us! As Deuteronomy 33:27 tells us, “The eternal God is your refuge, and underneath are the everlasting arms.”

Over time, Adoniram’s depression began to lift, and the “Great Unknown” revealed Himself in a profound way, replacing despair with hope. Surely Adoniram could say with the Psalmist, “He also brought me up out of a horrible pit, out of the miry clay, and set my feet upon a rock, and established my steps” (Psalm 40:2, NKJV).

As Adoniram emerged from his seclusion, to his amazement, he found that everywhere he went there was remarkable spiritual growth and salvation taking place among the Burmese. He remarked, “I sometimes feel alarmed like a person who sees a mighty engine beginning to move, over which he knows he has no control!”

After years of toil, perseverance, patience and heartbreak, suddenly the floodgates were opening! Adoniram finally finished his translation of the Burmese Bible in 1840. He also remarried to a young widow named Sarah Boardman who had come to serve with her husband in northern Burma several years prior. They had a fruitful marriage and ministry; however, she passed away in 1845. Adoniram married once more in 1846 to Emily Chubbock, a popular children’s author back home in America. Their marriage lasted until his death in 1850.

The legacy of Adoniram Judson and his family had profound influence not only on the nations of Burma and America, but also on the world of foreign missions.

No doubt the enduring nature of that legacy was the foundation on which it was built—the great love and sacrifice of Jesus Christ.

And because Adoniram personally experienced the depths of that love and the strength of that foundation in his darkest hour, his life bore more fruit than it ever could have otherwise. No wonder Adoniram Judson, in his final days on earth, never ceased to repeat this refrain:

“The love of Christ
Boundless in its breadth
Infinite in its length
Fathomless in its depths
And measureless in its height.”