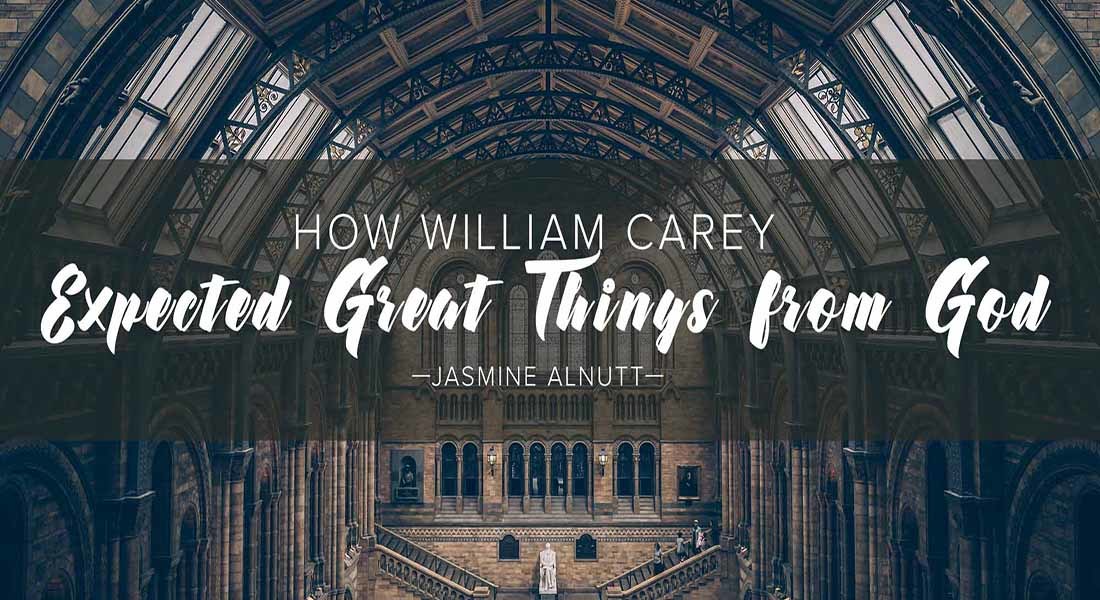 “Go ye therefore, and teach all nations, baptizing them in the name of the Father, and of the Son, and of the Holy Ghost.” The words of Jesus in Matthew 28:19 have been the call to missions throughout the history of the Church. It was this verse that captured the heart and mind of a humble English shoemaker named William Carey in 1786 when he first proposed the formation of a missionary society at a meeting of local ministers. Compelled by Jesus’ words, Carey would go on to spearhead the great missionary movement of the 19th Century.

Carey was born in 1761 in a small English village and lived a life of poverty as a shoemaker.

After marrying at age 20, he also opened a school to support his growing family. He led such a life of obscurity that we would never have heard of him were it not for God moving on his heart!

Once William had accepted Christ, his interests began to expand. In his mid-to-late twenties, he started preaching and was named pastor of a small Baptist congregation. He also began to study various academic disciplines, excelling particularly in languages.

After reading about Captain Cook’s exploration of the Pacific, Carey was inspired to research foreign lands and peoples. As he filtered this information through his relationship with God, he realized that these countries represented multitudes of people who were perishing without the knowledge of the Gospel. This so grieved him that he would often break down and cry! Naturally, Carey’s vision expanded as he felt the Lord impress upon his heart the urgent need for foreign missions. He saw explicitly in the Bible God’s desire to make Himself known to all people, and so he confidently set forth to share this vision with the church.

At this time in English church history, it was commonly believed that the call to missions was an apostolic calling that did not apply to the church any longer. When it came to godless nations, God in His sovereignty would save souls in His own way; therefore Christians were free from any responsibility in this regard.

Thus when Carey proposed a missionary enterprise at that meeting in 1786, he was sharply reprimanded with the words, “Young man, sit down! When God pleases to convert the heathen, He will do it without your aid or mine!” This may shock us as Christians today, but this view persisted for years until Carey published An Enquiry into the Obligations of Christians to use means for the Conversion of the Heathens. In this historic and revolutionary pamphlet, he addressed and confronted major concerns and excuses for not engaging in missions.

By the time the next ministers’ meeting rolled around in May 1792, Carey’s fellow ministers had at last become open to the idea.

And at last these ministers responded! Not to be overlooked is what a great step of faith this was; these men were poor, slightly educated, humble country ministers with no experience choosing to embark on what was then a virtually unknown venture!

Incredibly, the missionary society established by these humble men became the model for 19th Century missions’ organizations and essentially transformed 19th Century Christianity! Within a few years, all major denominations were inspired to form their own societies.

No wonder it has been said that this missionary venture “restored the Gospel to its central place in Christianity!”

As the Apostle Paul noted in 1 Corinthians 1, God truly has chosen the foolish, the weak, the base things of this world to show His power and glory, and these men in rural England are a beautiful example of this!

Not surprisingly, William Carey eagerly volunteered to be the first missionary sent out, and eventually he and his family departed for India with a man who had lived there previously, Dr. John Thomas. The group set sail on June 13, 1793, and arrived November 19 of that year.

From the start, Carey encountered obstacles, some of which would plague him for years. The East India Company, which monopolized the trade and occupation of India as a British colony, was hostile to “Christianization” and therefore to people like William Carey. The Careys were also ravaged by disease, and some of their children died. Dr. Thomas also proved to be a burden; although he was the mission’s financial manager, he had a habit of overspending and incurring debt, so that within a year he ran the Careys into bankruptcy!

To make matters worse, Carey’s wife began to manifest signs of mental illness following the death of their five-year-old son, Peter, spending the last 12 years of her life totally insane; she maligned William’s character and even chased him with a knife on more than one occasion. Toward the end of her life she had to be restrained in her bed, ranting and raving while Carey attempted to work and study in the next room. It is a testimony to the faithfulness and selfless care of her husband that she was able to stay at home and not be placed in an asylum. Through it all, William persevered in his work; amazingly, he chose never to speak ill of either Dr. Thomas or his wife, but to cast his burdens on the Lord.

What a powerful example of self-control!

Eventually his family moved to Serampore and was joined by new missionary families from back home in England. It was from Serampore that the ministry began to flourish. Together with William Ward and Joshua Marshman, Carey created a hub for Baptist missionary activity in India and became known as one of the greatest missionary teams in history.

Evangelism and preaching the Bible were the priority of the Mission; however, Carey’s first Indian convert did not profess faith until the end of 1800 (after seven years of ministry!). This was largely due to the pervasiveness of the caste system of Hinduism at that time. And yet beginning with this first convert and his household, one by one the Lord added to their numbers as many were emboldened by their fellow Indians to confess Christ. After 25 years of ministry in Serampore, there were about 600 converts with thousands attending services. What’s more, numerous mission stations in various districts of India were established.

As part of propagating the Gospel, Carey was driven by a firm belief in the need to translate the Scriptures into the vernacular of the people. He rightly concluded that once the Gospel transformed individual lives, it would in turn transform the culture as a whole.

For example, Carey’s translation work blew open the doors for written literature in India’s languages. Before he came on the scene, the language of Bengali had no printed literature, so this was a major improvement! Carey even printed secular literature and started the first newspaper ever printed in an oriental language. He thus paved the way for Bengali to become one of India’s primary languages. During his 35 years in Serampore, Carey made three translations of the entire Bible as well as multiple partial translations into a variety of languages and dialects.

When they saw that he was not a political threat, they asked him to become the Professor of Oriental Languages at Fort William College in Calcutta, now Kolkota. Rather lofty for a self-educated shoemaker! Carey contributed greatly to secular and religious literature translation at Fort William. He also founded many schools throughout the country, including Serampore College in 1819, which trained up Indian nationals in evangelism and church planting. What’s more, his schools were some of the first in India to educate girls.

Although Carey loved and respected the Indian culture, he also worked to have horrific superstitious practices abolished, including sacrificing children to the gods, burning widows alive with their dead husbands, and burying widows alive. Carey petitioned the British government repeatedly for the abolition of such rituals, but it took at least 30 years for any legislation to be enacted! Yet when the final edict passed, the British Governor asked Carey to translate it! Undoubtedly, Carey found a way to bring the influence of the Gospel into every area, even when it came to science! Because he knew that astrology had a powerful grip on the Indian people, he introduced astronomy in his schools to demonstrate that the stars did not dictate human life, but were created by God and could be used for purposes such as navigation. As an avid botanist, Carey became the first person in India to develop forestry conservation as well as much of India’s agriculture and horticulture; there are even plant species named after him! By showing the nobility of God’s creation, he was able to help free people from superstition regarding reincarnation, which taught that some creatures were “souls in bondage,” and point them instead to their Creator.

As we can see through his contributions to India’s literature, education, legislation, and science, William Carey’s Christianity affected all areas of Indian culture.

He had a heart to see entire nations changed by the Gospel holistically—and it happened! He thus served as a model for future generations. Significantly, Peter Hammond noted of 19th Century missionaries “how comprehensively they sought to fulfill the Great Commission by ministering to body, mind and spirit. Their aim was nothing less than the total transformation of all areas of life in obedience to the Lordship of Christ.”¹

William Carey is indeed a powerful example of perseverance and confidence in the power of the Gospel. In times of great difficulty and little fruit, when many would give up or be counted a failure, he chose to cast every burden on the Lord and plod along with his eyes fixed on Jesus and His Great Commission. Although he has fittingly been named the “Father of Modern Missions,” at the end of his life he said, “Though I am of little use, I feel a pleasure in doing the little that I can. When I’m gone, say nothing about Dr. Carey—speak about Dr. Carey’s Savior.”

Enjoy the first article in this missionary biography series entitled, “How We Know Our God Determines How We Live Our Lives”.